Own one of these? The top 10 stolen cars in the Denver metro area

DENVER — Thieves heart Hondas! That’s according to recently released data showing the Honda Civic and Honda Accord art the two most sought-after models among car thieves in the Denver metro area.

Vehicle thefts have been on the rise in the Mile High City and the rest of the state over the past several years, and thieves appear to have developed a fondness for the Japanese automaker.

Honda vehicles, specifically the Civic and Accord, have once again topped the list of the ten most stolen cars in the Denver metro area in 2017, according to the Colorado Auto Theft Prevention Authority.

The two Honda models accounted for nearly 45 percent of the CATPA list, with 1,869 Civics and Accords being reported stolen last year.

But it's not just Denver, the enormously popular cars are loved by thieves nationwide, earning the top spots on the National Insurance Crime Bureau’s top ten lists year after year.

The second most popular make among Denver-area thieves is Subaru. Owners of the Impreza (486 thefts) and Legacy (254 thefts) from Colorado’s unofficial car brand were hit hard in 2017.

Here are the top ten stolen vehicles in the Denver metro area 2017: 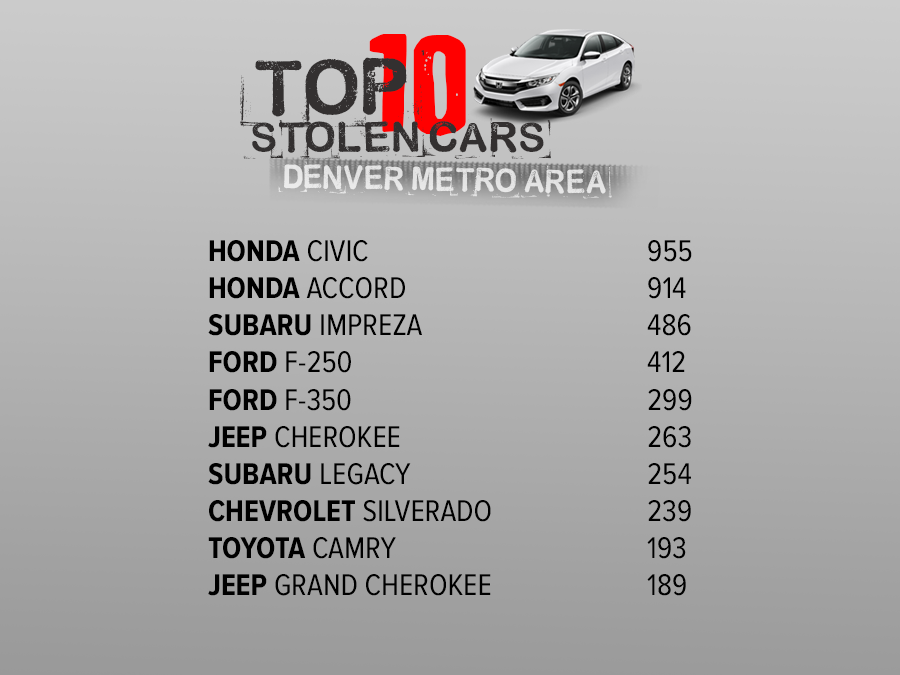 Is your vehicle on this list? If so, police say you should be extra careful in protecting yourself from being a victim of motor vehicle theft and offer the following tips: