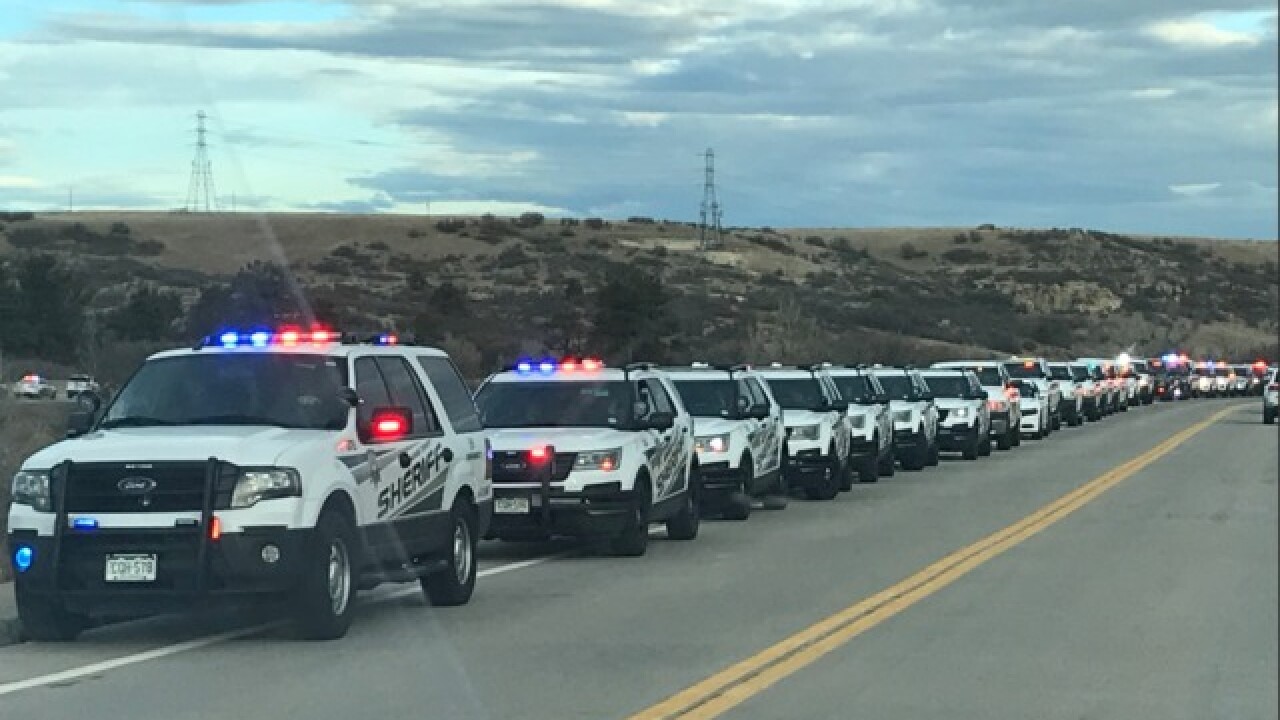 Copyright 2018 Scripps Media, Inc. All rights reserved. This material may not be published, broadcast, rewritten, or redistributed.
<p>Thousands of police officers from across the country joined the funeral procession for Douglas County sheriff's deputy Zackari Parrish, who was killed in the line of duty on New Year's Eve. </p>

CASTLE ROCK, Colo. -- Thousands of law enforcement officers from across Colorado and around the country descended on Castle Rock Friday morning to honor the life of Douglas County Sheriff’s Deputy Zackari Parrish.

Parrish died in the line of duty on New Year’s Eve after a shootout with a suspect at the Copper Canyon apartments. Four other officers and two civilians were also injured before the shooter was killed.

Police cruisers lined up along I-25 for miles and officers stood outside of their cars saluting as the hearse carrying the young deputy passed by.

“It’s extremely important to support our law enforcement community and make sure that they know that everybody in the state is thinking about them, and that we care and we want to be here for the family,” said Eric Benson, from the Avon Police Department.

Blue ribbons adorned the trees and signs of the streets along Lincoln and University, which is the route the procession took to the Cherry Hills Community Church in Highlands Ranch.

Many of the officers that attended told Denver7 they didn’t know Parrish personally but wanted to stand in solidarity with their brothers in blue.

Along the funeral procession route, dozens of Douglas County residents stood waving American flags and holding their hands over their hearts as the cars passed. Groups of Boy Scouts and a single soldier in uniform were among those who watched the procession of police pass by.

“We’re here for you guys. We love you guys and we have Deputy Parrish’s watch from here on out,” said Brian Vanderpool, from the Snowmass Village Police Department.

Most made the decision to attend Parrish's services as soon as they heard of the deputy’s passing.

“The minute that we heard that the deputy passed away, we knew we were going to be here,” said Patty Baxter, from the El Paso County Search and Rescue team.

The size of the procession was surprising even to the officers who attended. Littleton Police Department spokesman Trent Cooper said he’s been to at least 20 funerals for police officers in his career, but even he was amazed.

“You can see there are hundreds if not thousands of police officers here that understand the risks with the job. We’re paying our respects to the sacrifice that he made and the sacrifice his family made,” Cooper said. “Whatever support we can give to them, we’re here and we’re ready to give that support.”

Along with officers from Colorado, representatives from Utah, Nebraska, Idaho, Montana, Wyoming and other states made the drive to take part in the procession.

“Whether I knew him or not, this is a family. We are a family. We all look out for each other and you just feel like you lost somebody that, even though you didn't know him, you cared for him and his family. You just have to show up and show your support and show respect for this man that gave his all for people he did not know,” said Kyle Taylor, from the Washington County Sheriff’s Office.

Before Taylor made the trip to Castle Rock Friday, he told his parents and his girlfriend he loved them.

“It’s just hard to come to these things because it does make you realize that that stuff can happen in a second,” he said.

Taylor said he understands that the job is dangerous, but he says officers look beyond that fear every day and never hesitate.

“It’s a hesitation that happens after the fact. Our training kicks in and keeps us from getting hurt and after the fact you sit back and go, ‘Wow that was pretty dangerous. I’m glad I made it out,’” Taylor said.

Despite the fact that they come from different cities and jurisdictions and wear different badges, all of these officers brought a unified message for the family of Deputy Parrish.

“That man was a brother to me and I am deeply sorry for your loss. I am glad to be here and proud to be here to pay my respects for that man,” Taylor said.