The number of teenagers tackling part-time jobs has been decreasing for several years. Here's why.

The number of teenagers tackling part-time jobs has been decreasing for several years.

New data shows that the number of teens working part-time jobs has dropped about 15 percent since 2000, when almost half of Colorado teens were employed, said Ryan Gedney, a senior economist with the Colorado Department of Labor and Employment. 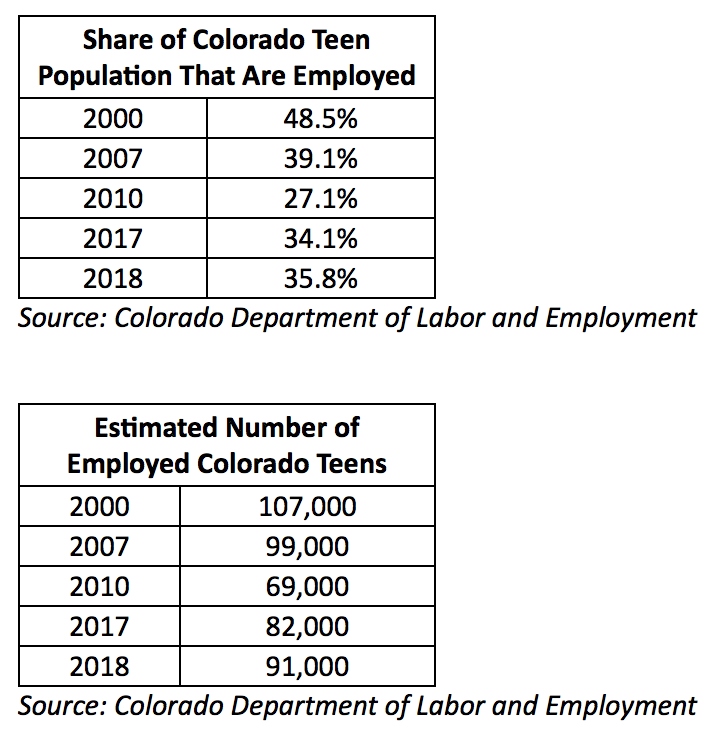 Gedney said the number of working teenagers dropped dramatically during the Great Recession and this sector hasn’t bounced back like the others.

The trend follows national data, particularly when it comes to summer employment.

“Teenage summer work is not the norm anymore like it was 10, 20, 30 years ago,” said Drew DeSilver, a senior writer for the Pew Research Center who published a report on teen summer employment.

Along with a higher percentage of teenagers staying in school, researchers said there are more demands on their time for school work, sports, volunteer work and internships. Many teenagers are using these types of experiences to bolster their resumes to get into good colleges.

“Teenagers have a lot more going on,” DeSilver said. “They have a lot more demand on their time. There are possibly fewer opportunities to get the kind of small job that I remember getting when I was a teenager.”

The second major factor for these lower teen employment numbers is competition for these jobs. Colorado data shows that more people who are 55 and older are also accepting jobs that teenagers historically have worked.

However, with a rising minimum wage, Gedney said he believes more teenagers might consider taking part-time jobs to earn some extra cash.

“I think there comes a point when the wage will start enticing teenagers and Colorado to at least think about working a job,” he said.

Another major shift in teen employment has to do with the types of jobs they are working.

DeSilver said he’s also seen fewer job opportunities in the retail sector, with more of a move toward online sales.

At a Christmas tree lot on Santa Fe Street, owner Pete Elliott said he believes the work experience is invaluable for teenagers. He employs about 120 people for the season and 60 percent of them are teenagers.

“What you can learn out here is just in retail, dealing with customers, being productive and seeing how it works amazing. These kids get a lot out of it,” Elliott said.

Elliott said his first job was on his father’s tree lot, where he learned lessons about entrepreneurship. His father would also hire his friends for the seasonal work.

“Probably 90 percent of them now own their own businesses now,” Elliott said. “It’s great for these teens to get out and make some extra income and, better yet, the education part is awesome and working with the public.”