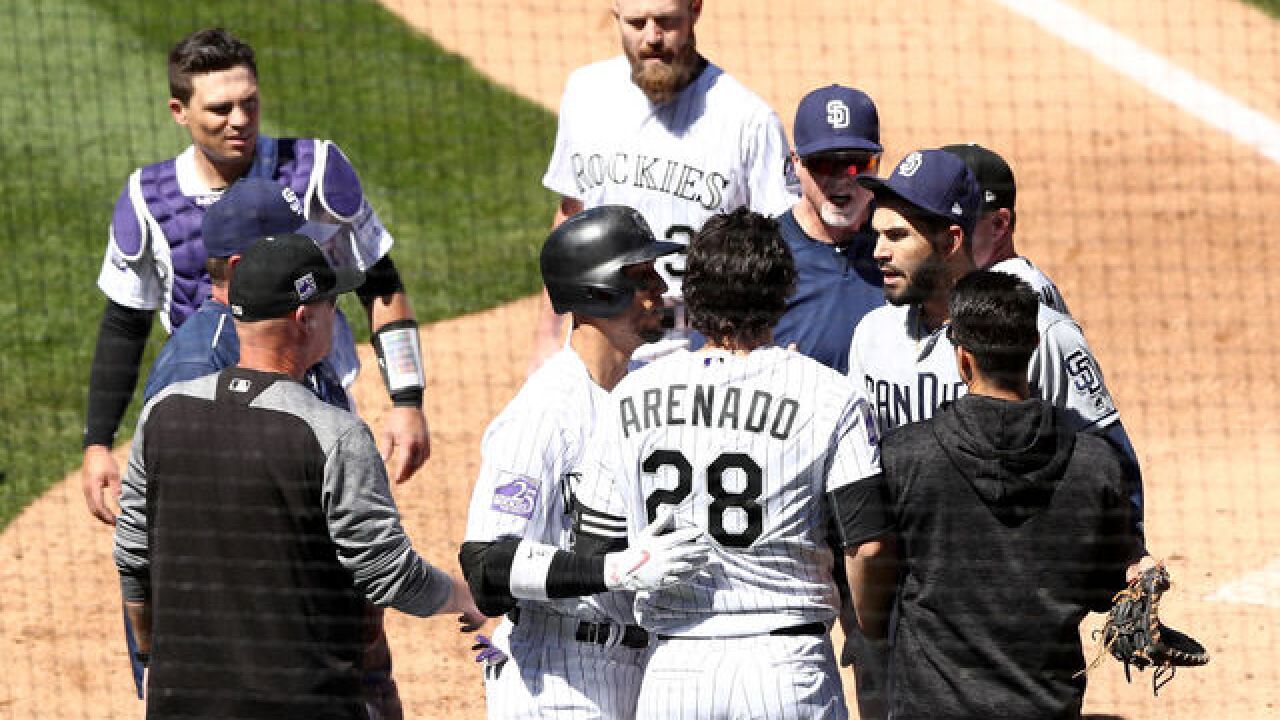 2018 Getty Images
Matthew Stockman
<p>DENVER, CO - APRIL 11: Benches clear as a brawl breaks out between the Colorado Rockies and the San Diego Padres in the third inning at Coors Field on April 11, 2018 in Denver, Colorado. (Photo by Matthew Stockman/Getty Images)</p>

DENVER -- Rockies star Nolan Arenado walked to the batter's box in the bottom of the third inning fully aware of the situation.

Three players had been plunked in less than 24 hours, including two Wednesday. Arenado thought the Padres might retaliate, but not against him. So when Padres starter Luis Perdomo unleashed a 96-mph fastball behind him and shoulder level, Arenado exploded with anger. He charged the mound, triggering a basebrawl that led to five ejections and enough bad blood to inspire another Taylor Swift hit.

"Just getting thrown at, 96 inside. All of the above. It's probably just frustrating," said Arenado, who dodged Perdomo's flying glove as he attempted to punch him.  "I don't have to too much to say about it. They felt they had to do something, and I felt I had to do something."

Arenado faces discipline, even as manager Bud Black defended his actions, explaining, "He was intentionally thrown at."

An MLB source told Denver7 a ruling could come as soon as Thursday. Umpires ejected Arenado, Gerardo Parra, who jumped onto the pile and threw a punch at catcher A.J. Ellis, and pitcher German Marquez. A pair of San Diego players were tossed: Perdomo and Elllis. Players can appeal the league's decision, and the Rockies involved likely will in order to stagger the impact on the roster.

"Yeah, I expect to be suspended. Hopefully it's not a long time," Arenado said.

The animosity between the teams began to bubble Tuesday night when Rockies reliever Scott Oberg hit San Diego center fielder Manuel Margot in the ribs. It left him spitting up blood and landing on the 10-day disabled list. As such, it was no surprise the Padres plunked Rockies shortstop Trevor Story in the first inning. If that evened the score, what happened next became too much for the Padres to accept. Marquez struck Hunter Renfroe in the forearm. Though he was attempting to swing, San Diego took a critical view of the inside pitch.

Arenado later stepped into the box, and Perdomo let loose.

"I think it was a little high. I didn't think it was possible (that they were going to hit him). But obviously they felt it was necessary," second baseman D.J. LeMahieu said. "It didn't surprise me Nolan went out there. He had to do what he had to do."

Added outfielder Carlos Gonzalez, "The guy is throwing 92, 93 (mph) and suddenly he's 97 and up near his shoulder. I went out there ready to take punches or throw punches. Whatever it took to protect 28 (Arenado)."

The Padres explained that several of their players were hit, and that Perdomo has the right to pitch inside. Given the differing views of Wednesday's melee, tension could linger when the teams face off on April 23 at Coors Field in a three-game series.

"I don't know," Gonzalez said. "We don't come to the field to fight. I guess we will see."