DENVER – A new survey from the Pew Research Center shows increased nationwide support for government-supported health care and that low-income Republicans have increasingly warmed to the idea of health care coverage for all Americans over the past year.

The report, published Friday, found that 60 percent of Americans support government-backed health care coverage for all Americans – a 9 percent increase from a poll last year and the highest percentage Pew has found since a 2006 Gallup survey.

But the numbers are still widely split between Democrats, 85 percent of whom polled support federal health care coverage, and Republicans, of whom only 32 percent said they supported government-backed health care.

The report also found that 52 percent of Republicans with household incomes of less than $30,000 per year support government-backed health care for all – up from 31 percent nine months ago. 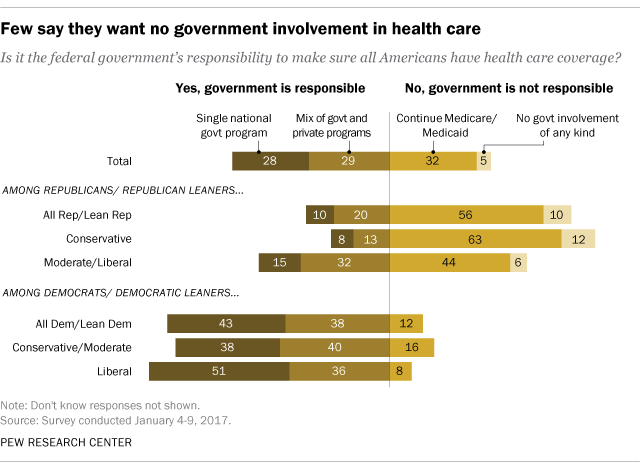 The near-20 percentage point increase was also seen among “middle class” Republicans earning between $20,000 and $74,999 per household each year. Thirty-four percent of those polled said they supported government-backed health care coverage, compared to 14 percent last year.

But there were also splits when those surveyed were asked whether they supported a single-payer system or one like the current system set up under the Affordable Care Act in which the government subsidizes people’s plans that they buy through private insurance companies operating on national or state exchanges.

Congressional Republicans have already passed the initial steps to repealing the ACA, though there is no replacement plan in place despite promises from President-elect Donald Trump and others that they would “repeal and replace” the ACA.

There were rallies held across the country Sunday, including in Denver, to ask that Congress not repeal the ACA, often referred to as Obamacare.

Sunday, Trump said he wanted “health insurance for all” but his spokesman, Sean Spicer, walked those comments back.

Gallup data from December found that some of the counties and states that voted for Trump in November also saw the highest enrollments in the Affordable Care Act coverage last month.

The Pew Research Center poll was based on telephone interviews of 1,502 adults in all 50 states and was conducted Jan. 4-9.