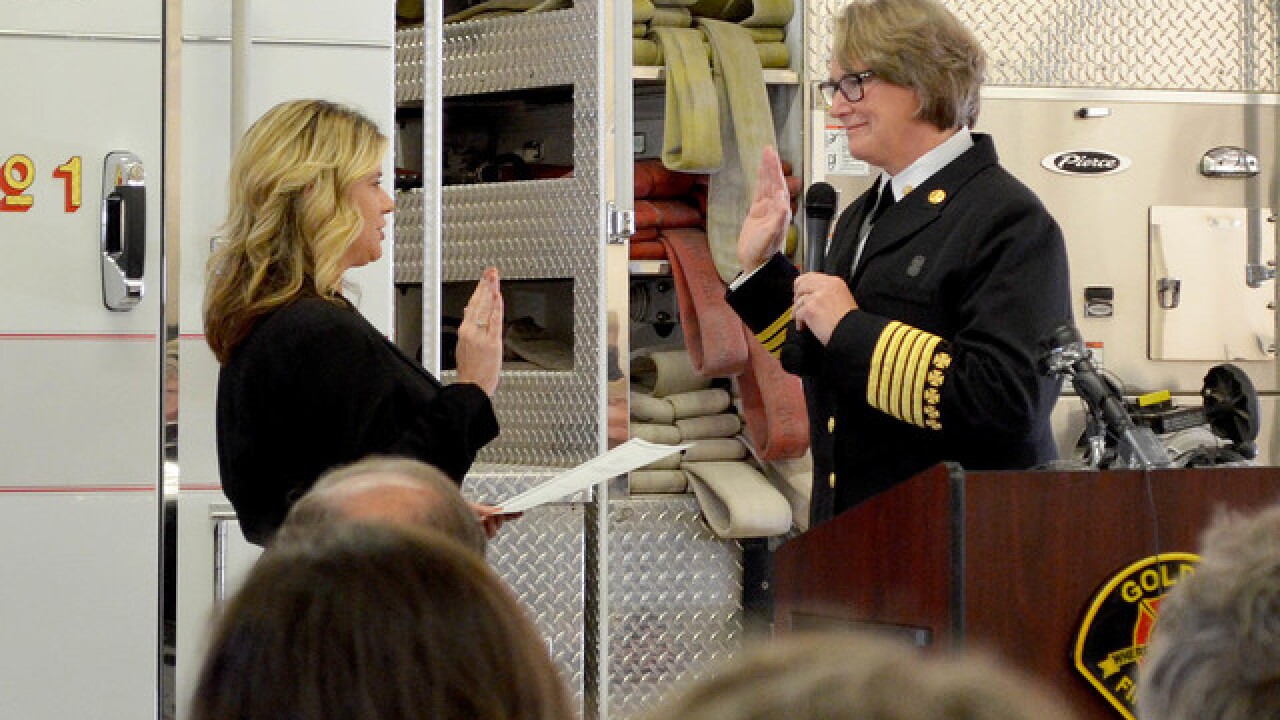 Copyright 2018 Scripps Media, Inc. All rights reserved. This material may not be published, broadcast, rewritten, or redistributed.
<p>Alicia Welch was sworn in as Golden Fire Department's newsest chief on Monday, Nov. 26. </p>

GOLDEN, Colo. — When Alicia Welch moved to Golden to retire after spending more than two decades with the fire department in California, she found herself drawn to the city's fire department. She looked at it every time she passed by, and wondered what the staff and volunteers were working on that day.

That curiosity only increased and on Monday, Welch launched a new career to get all her answers.

You can now call her Chief Welch.

It was a historic moment in more ways than one, as Golden City Manager Jason Slowinski explained at her swearing-in ceremony. In front of dozens of guests, friends and family members, Slowinski said Welch is the first fire chief to be sworn in in the city in almost 20 years, as well as the first female fire chief ever in department history. She also takes her place as one of only about 50 females in the country to achieve the rank of fire chief.

The Golden Fire Department has been a leader in Colorado's fire service since it was established in 1879, Slowinski said.

“And today, we add yet another fine moment as we swear in the first full-time female fire chief to serve a Denver metro area fire department,” he said.

Welch moved to Golden a couple years ago to retire, following 26 years with the Los Angeles Fire Department. She’s a graduate of the highly acclaimed Los Angeles Police Department West Point Leadership Academy and was part of the team that responded to Hurricane Katrina and Hurricane Rita. In 2009, she was selected as one of three distinguished fellows to work with the Department of Homeland Security and FEMA on a year-long assignment to develop a national preparedness model.

She said she plans to carry that knowledge into her new position with a focus on emergency preparation in Golden.

“What I’d like to do with the business community and residents is go back to that emergency preparedness — making sure every family is safe, has an evacuation plan, has a kit with supplies (and) knows how to gather information so that they can leave in the event of a fire or a storm or a power outage," she said.

Coming from California — which like Colorado, has seen its fair share of wildfires — she said she also hopes to educate residents about proactively reducing the risk of property or personal damage from those kinds of fires.

But as far as major changes? Welch said she doesn’t see anything that needs a total makeover as of now.

“This group of firefighters in Golden — 80 percent of them are volunteer,” she said, looking over the crowd. “So, they’re here today on their own time because of their love of the city, their commitment to serving this community … They’re committed to this community and they do it in a way that’s very professional. They’re very dedicated. And I wanted to be a part of that team.”

With the support and backing of her friends, family and wife, Welch applied for the position and was offered it earlier this year, after beating out 60 other highly qualified candidates from across the nation.

“Beyond her extraordinary record of service and academic credentials, Alicia stood out because of her deep dedication and passion to the fire service,” Slowinski said. “That devotion extends to the men and women who are called to that service, and to her commitment to leading a department that leverages the strength of its team members in service to the community. Alicia fully understands what it means to be a part of the Golden community and I am confident that she will lead the Golden Fire Department with pride and distinction.”