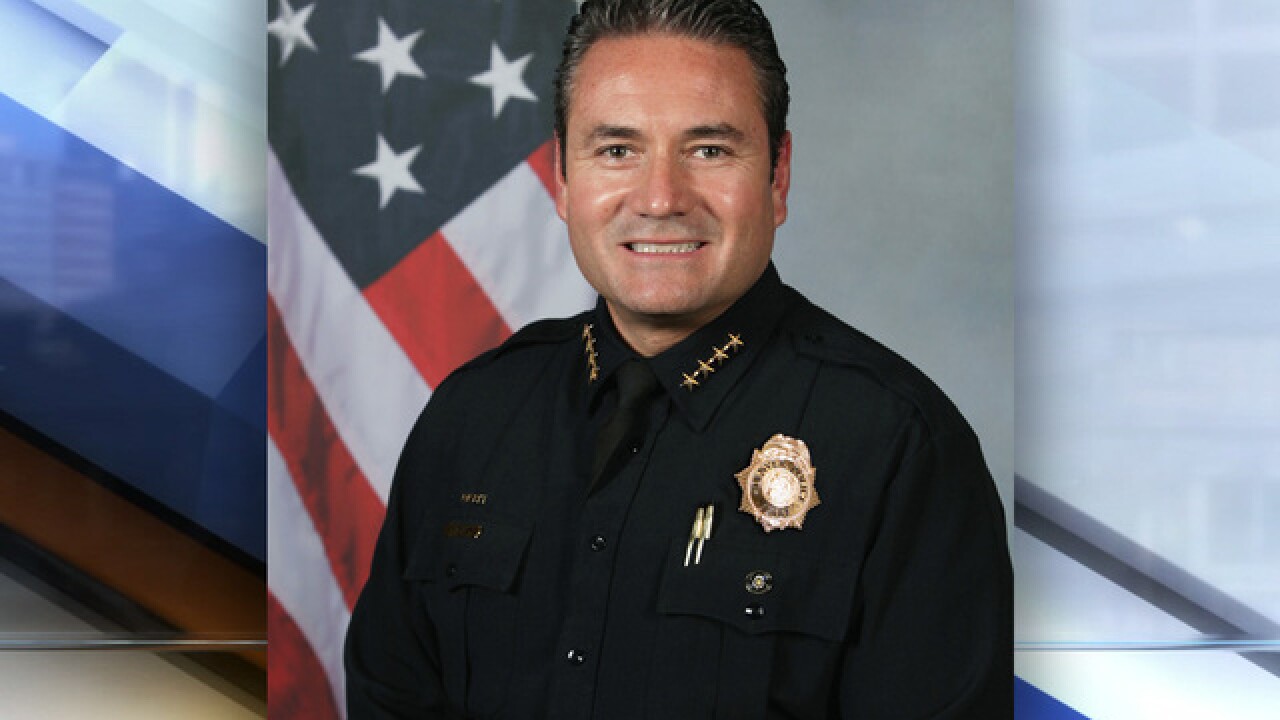 DENVER — Paul Pazen had the best job in Denver.

He was a commander with the Denver Police Department, overseeing about 150 officers on the north side of the city. He called it a dream, the “single best job in the entire city” — being able to positively affect his community. It was so good and so special that he wanted to replicate it on a grander scale.

“That was what was behind, or part of what was behind, the driving force of putting my hat in the ring and applying for the chief position,” he said. “I think we can do with 1,525 officers what we did with 150 officers.”

Mayor Michael Hancock announced Pazen had been chosen for the position on June 28 and a few days later, he was sworn in.

Denver has always been home for Pazen. He was born at Denver Health and went to Denver North High School.

“I was born to a single mom, raised in north Denver and got a lot of help from the community over the years,” he said. “This is my way of giving back.”

When he returned from serving in the Marine Corps, he applied for the city’s fire and police departments.

He’s now in his 24th year with the police.

Under former Police Chief Robert White, Pazen and the rest of the department learned new ways to prevent crime and ensure they respect everybody they come into contact with. Now, as chief, Pazen is building upon that by aiming to reduce what he calls social harms, or somebody’s fear of crime where they live, play and work.

Police have positively impacted crime and have the data to show it, he said.

“However, if our community members don’t feel safe in those areas, it doesn’t matter if the officers are walking around with a sheet of paper showing an arrow pointing down (on a chart),” he said. “People don’t feel safe. Not only do we have to address crime, we also have to address the fear of crime. If people are afraid to leave their house, if they go to work and come home, they send their kids off to school and the kids have to run inside and aren’t allowed to play outside or go to the park because they are afraid of crime — what have we accomplished?”

How does he plan to address social harms? Precision policing, he said.

Precision policing is what it sounds like — policing in specific places for specific reasons. For example, Pazen said, Sun Valley sees a high level of crime related to mental health issues. Policing in that area is different from policing in the Cherry Creek neighborhood, where residents face other crime, such as larcenies from homes.

Denver has 142 Census tracts and the department is collecting socioeconomic data — like poverty rates and educational attainment levels — on each one to understand the social harms in the area and what patrolling officers should focus on.

This personalized data for each tract goes beyond arrest reports and 911 data, Pazen said. The department hopes to have detailed information on each tract before the end of the year.

Police will also partner with groups in each neighborhood that support the needs of their community.

Some of those partners in the community are traditional, like Denver Health, and some are not, he said. Take the Denver Justice Project, for example. It does important work holding law enforcement officers accountable for their actions, he said, and he appreciates how its members take the lead solving community issues.

“If they’re working toward solutions, we want the same thing,” he said. “We want the same outcome for this community… That’s a big nontraditional partner that could have a huge impact on how we deliver services and essentially, the betterment of our community.”

Some of those community groups will also come in handy with the department’s domestic violence initiative, which is something Pazen aims to strengthen during his time as chief.

“Our data indicates that in September, October, November — we’ve seen a spike in the last two years, an uptick, in domestic violence incidents over that three-month period,” he said. “So, we are moving rapidly to get our model in place.”

The city, district attorney’s office and nonprofits do a great job of wrapping their arms around the victims of domestic violence, so now the police department wants to turn its attention to the offenders, and stop the crime before starts, he said.

Officers who respond to low-level domestic violence incidents — say, a verbal-only altercation — would give the offender a notification on the resources available to them to prevent the outburst. In the case of those with a violent criminal history, police could offer help from a mental health clinician, substance abuse specialist and more.

“It’s pre-incident — we’re trying to prevent these victims of domestic violence,” he said.

They are using a nationally acclaimed domestic violence initiative from High Point, North Carolina, and the district attorney is doing something similar with an initiative out of Arizona.

As the police department continues to, and starts, to roll out these plans, Pazen said he hopes the public remembers that uniform or no uniform, police officers are people.

“Sometimes we forget and officers are viewed as something ‘other,’” he said. “Not family members, not humans, not fathers, not mothers, not brothers, not sisters. The reality of it is we are everyday people just like the rest of the community. It’s strange how that somehow gets lost once you throw on a uniform. We’ve viewed in a different way.”

At the same time, an increased presence in the public eye can help the department increase public trust. While announcing Pazen as the new chief, Mayor Hancock said he rarely went to a public event where Pazen wasn’t there on duty.

“I get energy from it… I think it’s an important part of our job,” Pazen said. “Building the relationships and creating public trust — it’s the only way we’re able to do this job. We’re granted permission to police this community and if we act in a way that takes that permission away, then there’s no possible way that a police officer could do this job.”

Solidifying that trust requires face-to-face contact so Denver’s residents see their police officers as friends and neighbors, he said.

“It’s an all-encompassing job, but the opportunity to enhance the quality of life for the people of Denver, the people who live, work and play in the city, is great,” he said. “I’m excited about the opportunity I’ve been given. I’m confident our team will be able to step up and get us to that level.”