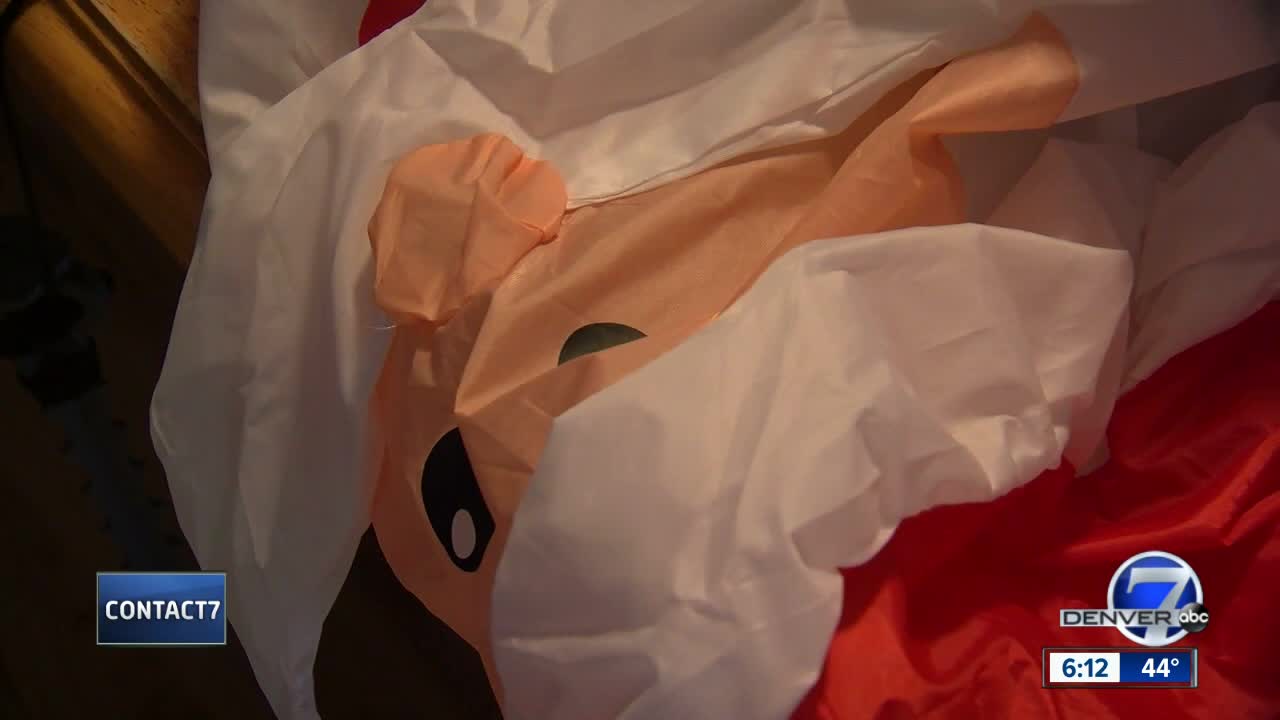 CENTENNIAL, Colo. -- The holidays are a time for giving, but a recent holiday prank is taking away from one family’s joy this season.

“It was ripped, it was torn. It had been seemed angrily ripped out of its tether and I didn’t know if it would ever be inflated again,” said Willow Creek resident Sue Rosser.

Rosser bought a new Christmas inflatable decoration with Santa and his reindeer this year to put up in her front lawn. A few days after she put it up, she and her husband found the inflatable damaged and deflated late one Friday night.

“I am a little sad because I wonder what goes on in somebody’s mind that makes them so upset and so sad that they would want to do this,” said Rosser.

She began fixing what she could on the ripped inflatable.

“It took me close to two hours to repair with hand sewing and a machine with what I could repair,” said Rosser. “Somebody had ripped the reindeer feet and ripped the connection between the two reindeer. Both feet were ripped because they had been staked and so they had just ripped it out, so I had to sew the feet back.”

Through the repair work, Rosser put up a post on Nextdoor warning other neighbors about what happened to her home.

“I didn’t want this to happen to anybody else because it just feels horrible,” said Rosser.

That feeling quickly went away when someone offered a helping hand on the neighborhood watchdog app.

“I pretty much check it every day,” said Mike Mendes. “Just to see what’s going on in the neighborhood.”

Mendes saw Rosser’s post. He reached out with a solution for the deflated decorations.

“This is just sail repair tape,” said Rosser. “When I saw the thing on Nextdoor I was like, 'I bet this will work' and it does. It works great.”

Mendes came by Rosser’s home on Wednesday to help patch the rips and holes in the Christmas inflatable.

“There were parts that I knew I couldn’t fix and that’s where Mike came in; he was a godsend,” said Rosser. “That was just above and beyond the call of duty for anybody to do that.”