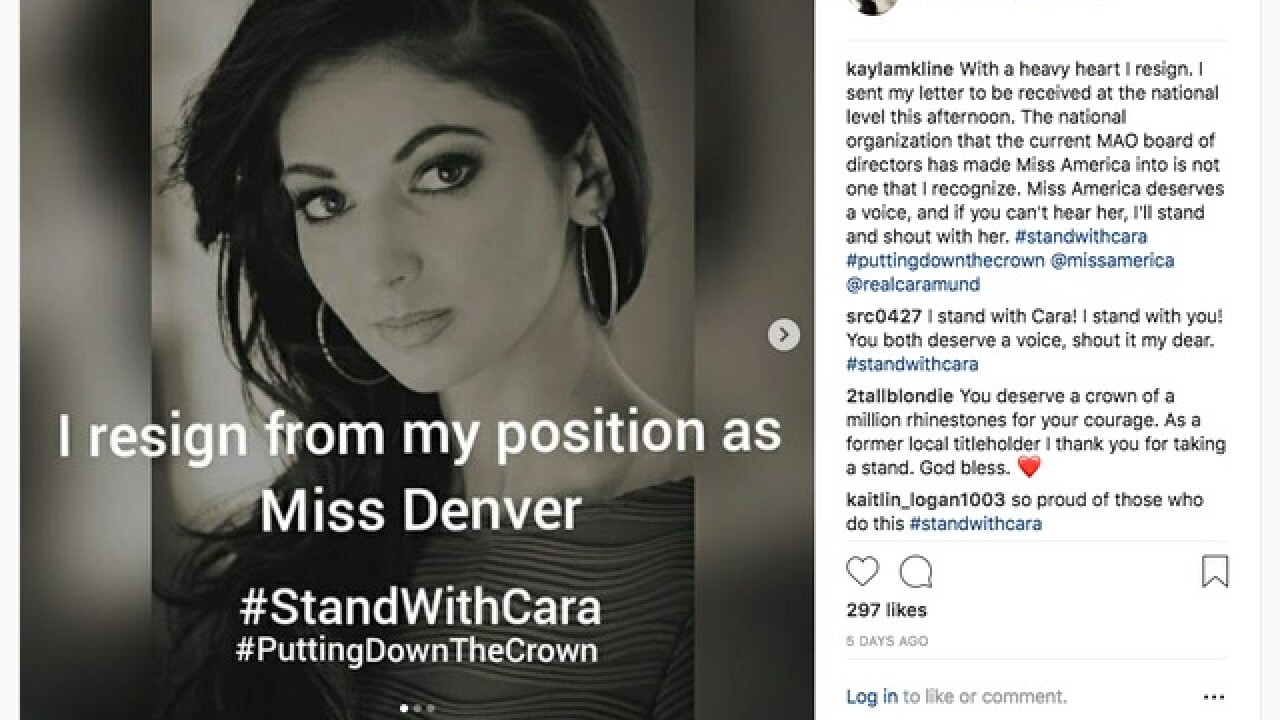 DENVER — The woman who once held the crown for Miss Denver 2018 has stepped away from the position.

Kayla Kline posted to her Instagram this week that she has resigned in solidarity with the current Miss America, who claimed of bullying in the Miss America Organization (MAO).

“With a heavy heart I resign,” Kline wrote in the post. “I sent my letter to be received at the national level this afternoon. The national organization that the current MAO board of directors has made Miss America into is not one that I recognize. Miss America deserves a voice, and if you can't hear her, I'll stand and shout with her.”

The post included a screenshot of her email to the national organization, where she expressed her concerns with its direction.

“I hope that maybe, if the current board recognizes that the actions they have taken and the manner in which they conduct themselves has caused damage enough to make faithful titleholders resign that it may help push positive change,” she wrote.

Her decision came in the wake of a letter penned by current Miss America Cara Mund, where Mund claimed that she was silenced and bullied by leaders in the organization, and wanted to stand up for all the volunteers and participants involved, according to the AP. Mund sent the letter to former Miss Americas on Friday.

"Let me be blunt: I strongly believe that my voice is not heard nor wanted by our current leadership; nor do they have any interest in knowing who I am and how my experiences relate to positioning the organization for the future," Mund wrote, according to the AP. "Our chair and CEO have systematically silenced me, reduced me, marginalized me, and essentially erased me in my role as Miss America in subtle and not-so-subtle ways on a daily basis. After a while, the patterns have clearly emerged, and the sheer accumulation of the disrespect, passive-aggressive behavior, belittlement, and outright exclusion has taken a serious toll."

On Aug. 17, MAO published a response to Mund's accusations.

“The Miss America Organization supports Cara," the response said. "It is disappointing that she chose to air her grievances publicly not privately. Her letter contains mischaracterizations and many unfounded accusations. We are reaching out to her privately to address her concerns.”