Meet the man behind the viral, punny community sign in Indian Hills 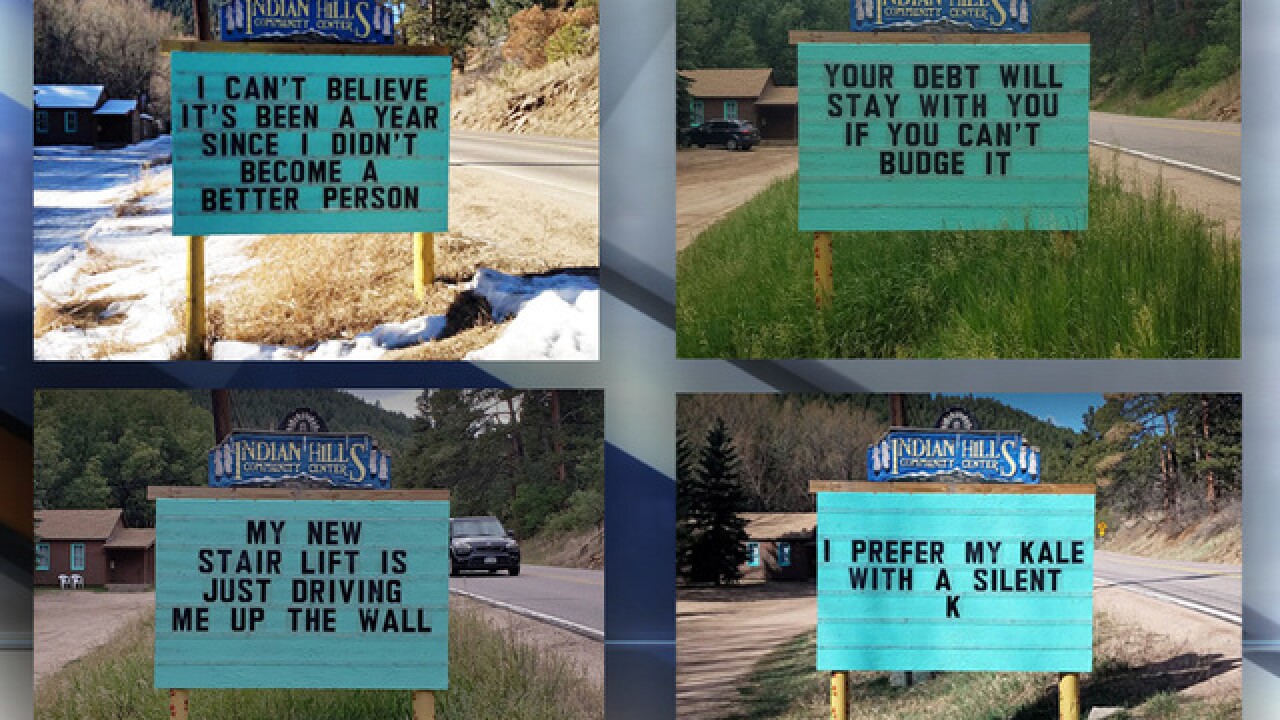 INDIAN HILLS, Colo. — “The only thing flat-Earthers have to fear is sphere itself.”

“I call my horse Mayo and sometimes Mayo neighs.”

“Looking back, I really hurt my neck.”

Those are just some of the phrases Colorado native Vince Rozmiarek has spelled out on the Indian Hills Community Center sign in the past five years, simply to bring a smile to somebody’s face.

Indian Hills, a small census-designated place tucked in Jefferson County, has been his home for 12 years.

The 2010 Census placed the population at just 1,280, but this punny community sign is putting it on the map.

Seven years ago, when Rozmiarek started volunteering at the community center, one of his first tasks was to build a new sign for announcements, weddings and other notes of interest.

Two years later, on April Fool’s Day, he decided to post a joke.

He said there’s a popular speed trap nearby on Highway 285 in Morrison, so he placed letters reading “Indian Hills annexed by Morrison, SLOW DOWN” on the sign as a prank.

“I got several phone calls — one from the police department asking what was going on in Indian Hills,” he said. “I explained it was an April Fool's prank and that I would pull it down at the end of the day. They said ‘Thanks, we just need to know what to tell people.’ Thus, it began.”

Most of Rozmiarek’s neighbors and passersby love the sign and its humorous phrases, he said. He changes the sign two to three times a week and never repeats sayings.

The first one to go viral online read, “Just because you're offended doesn't mean you're right,” he said. He had no idea it would reach as many people as it did.

“People have adopted it for their own causes all over the world,” he said.

But that’s not his favorite. He said he’s most proud of his creation from July 2, 2017: “Cows have hooves because they lactose.”

“It's just plain funny and I laugh even now when I say it,” he said. “That one went viral and everyone seemed to love it. I didn't offend any cows.”

The sign has led to some humorous situations, too, he said.

“We had a sign that got vandalized that read ‘Turning vegan would be a big missed steak,’” Rozmiarek said. “Various news outlets did a story about the fact that a vegan restaurant stole the letters and wouldn't give them back. Our response was to send a post with a picture of a cow with a knife to its head saying ‘You have 24 hours to give our letters back or the cow gets it.’ It was an entertaining exchange and we did eventually get the letters back with some vegan donuts.”

“It's a labor of love and I enjoy making people smile,” Rozmiarek said. “Also, because I'm constantly looking for new material, it keeps me in a good mood cause I'm always looking and creating funny stuff.”