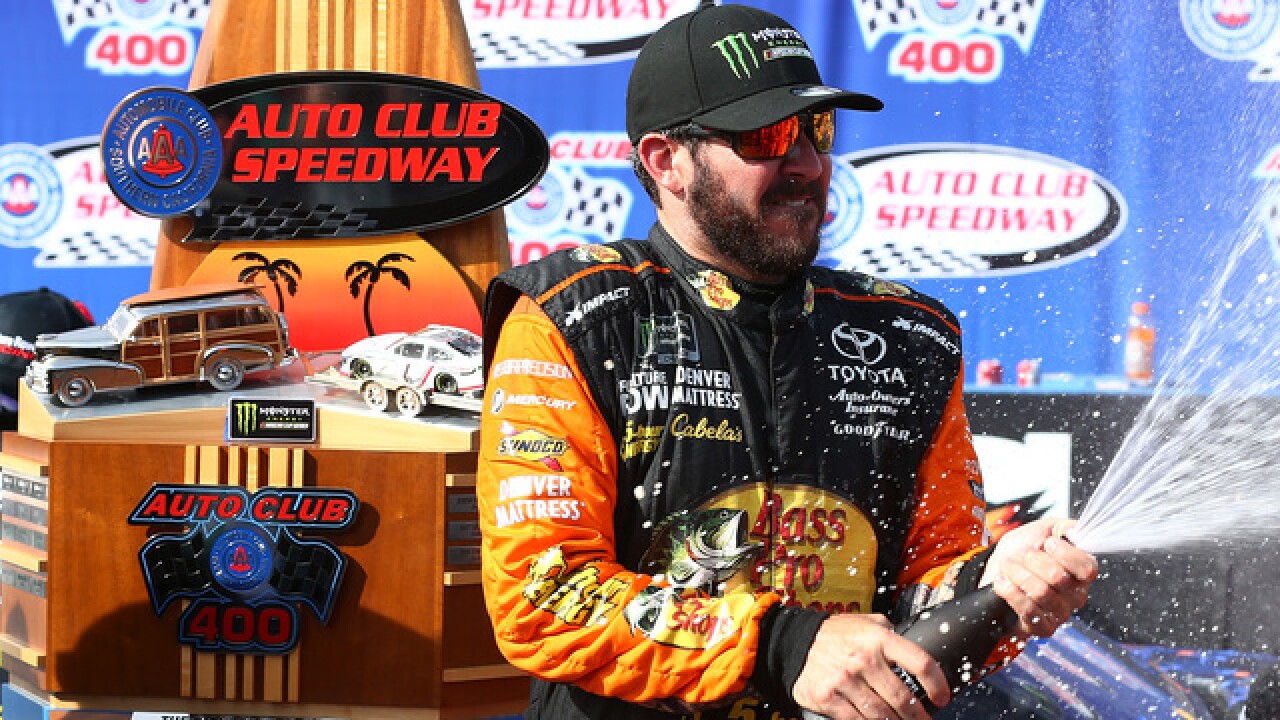 FONTANA, Calif. (AP) — Martin Truex Jr. saw nothing but clean air and green flags down the stretch in his first victory of the new NASCAR Cup season.

Truex didn't get much of a look at Kevin Harvick, whose bid for four straight wins was ruined by an early crash at Fontana.

So even while Truex's Furniture Row Racing Toyota team celebrated, it was a wee bit disappointed not to get a duel with the early-season king.

"I think we would have had something for him today," team owner Barney Visser said.

Truex roared to victory at Fontana on Sunday, beating Kyle Larson by 11 seconds to claim the first win of the season for last year's series champion.

Truex won both stages before rolling to the checkered flag on his 16th career victory and his first since that glorious championship day at Homestead last November. His first career victory at Fontana even moved Truex into the overall points lead, thanks to Harvick's woes.

Harvick dragged his damaged car to a 35th-place finish after early contact with Larson ruined his day. But after dominating at Auto Club Speedway, Truex's team was no longer certain Harvick has the fastest ride in the field.

"It just feels good to win," said Truex, who became the third driver to win from the pole at Fontana. "I don't really worry about who else is fast. Obviously (Harvick) has been quick. They've got a great team, and Kevin is an awesome driver. But as we've seen today, we can put together a run as well."

Truex took the lead for good with 32 laps left by getting past Kyle Busch, who finished third. Brad Keselowski was fourth.

When Truex got a series of post-race questions about Harvick, the defending champ suggested that Furniture Row proved early on that it can hang with Stewart-Haas Racing.

"That first pit stop was under green, and he came in pretty close (to me)," Truex said. "We left pit road, and I drove away from him. That was the only gauge I really had of that. ... I'm sure we'll have plenty of chances to race each other throughout the rest of the season."