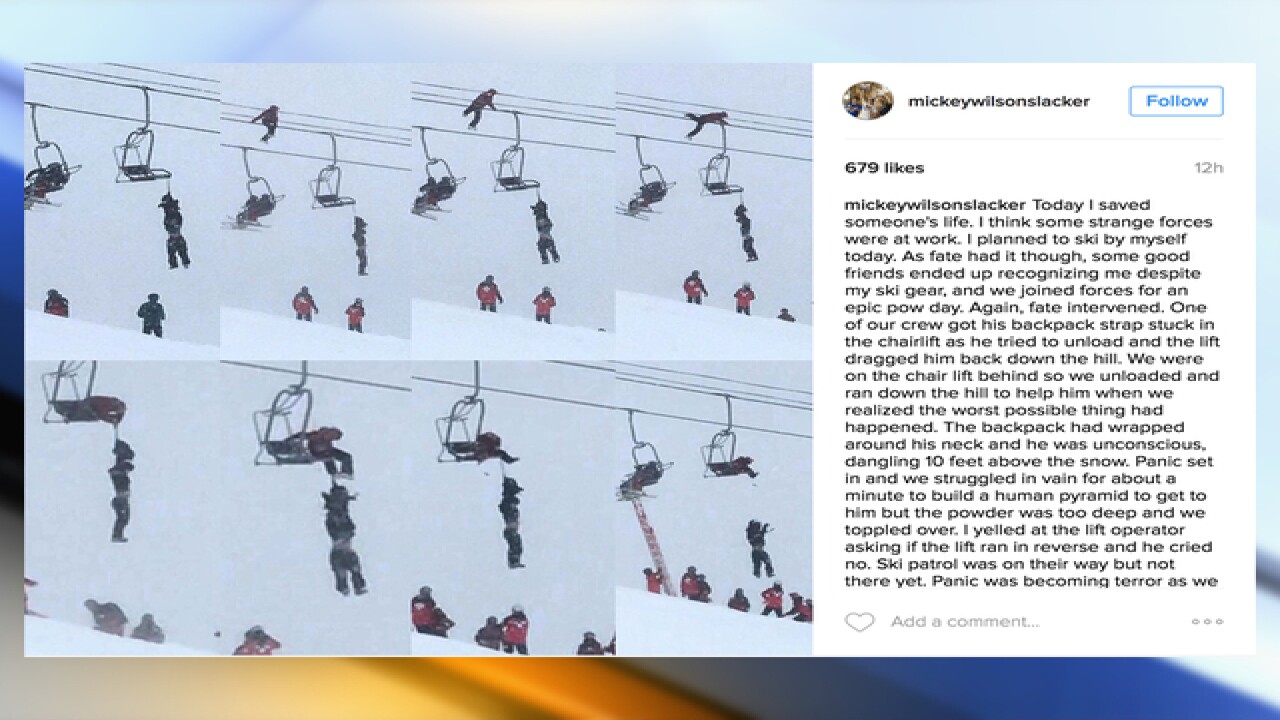 DENVER – A man who was dangling unconscious by his neck from a chairlift at Arapahoe Basin Wednesday likely had his life saved by a professional slackliner from Golden who was able to scale the lift and cut the man down.

Mickey Wilson, a professional slackliner who has won Red Bull competitions, among others, posted the tale of his rescue of the man to Instagram and Facebook Wednesday evening.

In the post, Wilson says he had planned to ski alone at A-Basin Wednesday, but ran into some friends, who were also skiing with the man who ended up dangling from the lift.

“One of our crew got his backpack strap stuck in the chairlift as he tried to unload and the lift dragged him back down the hill,” Wilson wrote in the post.

He said he and others were on the chair behind the man. They unloaded at the top of the lift and quickly realized the man was dangling unconscious from his pack, “10 feet above the snow,” according to Wilson.

He said he and others tried unsuccessfully in deep snow to build a human pyramid and rescue the man, and that ski patrol had yet to arrive.

“Panic was becoming terror as we realized we were about to watch our friend die in front of our helpless eyes,” Wilson wrote.

But he said he “had a eureka moment” and decided to climb the lift tower and crawl down to the lift to try and free the man.

“It was second nature, just like being on a slackline only way colder and made of steel,” Wilson wrote.

He said he tried and failed to kick the strap loose, but a ski patrol worker arrived and threw him a knife.

Wilson was able to cut the strap, and the man “fell like a doll into the snow,” according to Wilson.

He said several ski patrolmen performed CPR on the man and were able to get him breathing once again before skiing him down the mountain and into an ambulance, after which he was transported to St. Anthony Hospital in Lakewood, according to Arapahoe Basin.

The Denver Post reports that Wilson talked with the man via FaceTime on Wednesday night and said that the man seemed OK but was fitted with a neck brace. His post says the man is “doing quite well."

St. Anthony Hospital confirmed to Denver7 Thursday that the man was released Thursday.

In his post, Wilson credited his slacklining skills and the A-Basin ski patrol for rescuing the man.

“I’d like to take this moment now to thank the slacklife for the skills it has given me. It was incredibly fortunate I was there and able to act quickly,” Wilson wrote. “I’d also like to thank ski patrol for their strong work reviving our friend.”

Speaking to Denver7's Jennifer Kovaleski, Wilson said it was his quick thinking that helped him rescue the man.

"I got to save a life because I slackline," he told Kovaleski. "Slacklining did this to me but slacklining also let me do what I did yesterday."

A-Basin spokeswoman Adrienne Saia Isaac confirmed to Denver7 that the lift was stopped after the man got tangled, and that the dispatch was called about the incident at 11 a.m. and that Wilson cut the backpack strap.

Isaac said the lift did not malfunction and is open for the public Thursday.

“We wish to extend our best wishes to our guest for a speedy recovery,” Isaac said.

Wilson has been contacted for further comment, but he told the Post he’d be spending Thursday at A-Basin for a day of powder skiing after a strong winter storm.

The Summit County Sheriff's Office assisted in preserving the scene of the incident Wednesday and confirmed it had notified the Colorado Passenger Tramway Safety Board and U.S. Forest Service. The latter two agencies and Arapahoe Basin continue to investigate the incident, the sheriff's office said.

For video of the harrowing rescue, head over to the Denver Post or watch their video embedded below.

This is the second incident involving a chairlift at a Colorado ski resort in the past week. On Dec. 30, a San Antonio, Texas woman died when she and her two children fell off a lift at Granby Ranch ski area. Witnesses said a safety bar was not in place when the chair swung in the wind at hit a pole, knocking all three from the chair.