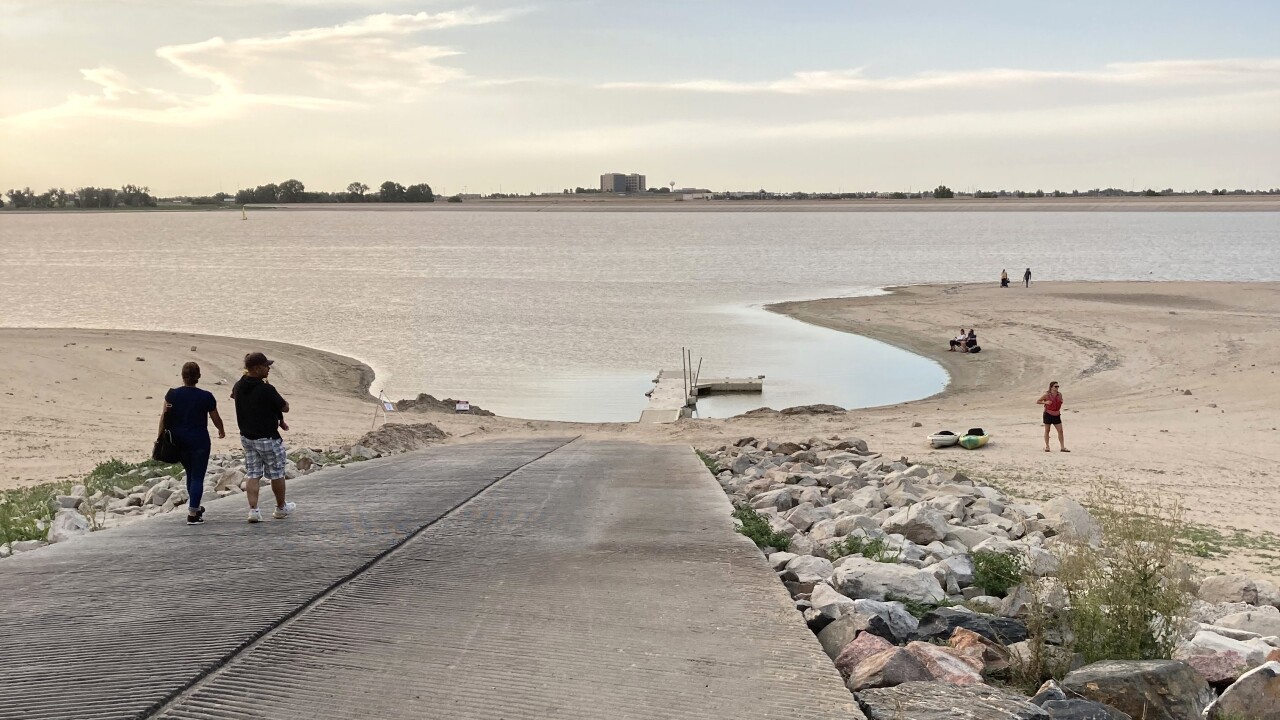 Colorado Parks and Wildlife.
An emergency public fish salvage was enacted for some reservoirs in Colorado as the state sees low water levels these past few days. The photo above shows the water levels at Barr Lake State Park.

DENVER – A combination of extremely low water levels, high water temperatures and algae blooms in recent days forced Colorado Parks and Wildlife to begin an emergency public fish salvage at more than one Colorado lake or reservoir by Friday.

Concerned over a “major loss of fish” at Barr Lake State Park, CPW said it would enact the public fish salvage to optimize use of the fishery resource.

“We are experiencing low dissolved oxygen levels in the lake,” Barr LakeState Park Manager Michelle Seubert said. “This is one of the many factors we look at when determining if a public fish salvage is needed. We had an algae bloom in July and August in about 20,000 acre-feet of water that grew algae and now all that algae is dying in about 4,000 acre-feet of water. So, lots of decomposition in a small body of water is contributing to the low dissolved oxygen levels.”

Barr Lake, like most of the state’s reservoirs, serves as a water storage first and as a recreational source second – offering fishing for rainbow trout, walleye, wiper, black crappie and yellow perch, officials said in a news release.

The public fish salvage will be allowed at Barr Lake only during daylight hours and all anglers must have a valid Colorado fishing license. Current size, bag and possession limits for all species will be suspended until the emergency public fish salvage is over, CPW officials said.

“We will rebuild the fishery immediately when we can have water coming back into Barr Lake,” Seubert said.

CPW said the boat ramp at Barr Lake is closed for trailered boats but still open for hand-launched boats.

The City of Boulder on Thursday said its residents would see lower lake and pond levels as well as dry vegetation due to severe drought conditions.

Currently, nearly 92% of the state is under a severe drought, according to the U.S. Drought Monitor.

“At this time, there are no water use restrictions in place, and drinking water quality remains unaffected,” Boulder city officials said in a news release. “Still, the city encourages the efficient use of water, such as irrigating between the hours of 9 p.m. and 9 a.m. and inspecting your sprinkler system for inefficiencies.”

And it’s not just the drought forcing closures and causing low water levels.

Harmful levels of blue-green algae at Big Soda Lake in Bear Creek Lake Park forced the closure of the lake to swimmers on Thursday as well.

The algae thrive in warm, nutrient-rich water, officials said, adding that excessive growth can occur during the summer months, with some varieties of blue-green algae able to produce illness in humans and animals.

Officials said in a news release that due to degrading. Water quality and low water levels, they do not expect the Big Soda Lake to reopen to swimmers for the rest of the year – though visitors can still go and enjoy the regional park from 6 a.m. to. 10 p.m.

The water situation wasn’t also favorable for the Julesburg Reservoir in Logan and Sedgwick counties as of Tuesday. CPW officials closed the boat ramp there Wednesday due to low water levels “that have eliminated access to trailer-launched boats.”

CPW officials said low water levels made the reservoir unsafe for boating conditions - particularly boats with a motor or boats that are trailered. Kayaks, canoes, or any other hand-launched vessels will still be. Able to be used at Jumbo (Julesburg) Reservoir said District Wildlife Manager Kyle Gordon.

Gordon also warned that because of the high irrigation demand created by severe drought, the decrease in water levels at the reservoir will “likely result in a loss of the entire fishery resource” - which forced CPW officials there to also enact a public fish salvage on Aug. 24.

Here in Denver, water reservoirs are in good shape, according to a Denver Water official, who said the city’s water collection system averaged 90% as of Friday, with 92% being the average for this time of year.

“That said, we continue to emphasize that customers need to follow our summer watering rules and keep watering to no more than three times a week, and limit watering to the hours between 6 p.m. and 10 a.m.,” said Todd Hartman with Denver Water, who also suggested residents turn off their sprinkler system due to incoming cold weather.

Conditions across the Front Range will change drastically in the coming days, as Denver will experience record heard through the Labor Day weekend with highs near 100 degrees by Sunday but will see temperatures take a nosedive on Tuesday as a strong system brings wintry weather to area with the possibility of Denver’s first snow by Tuesday.