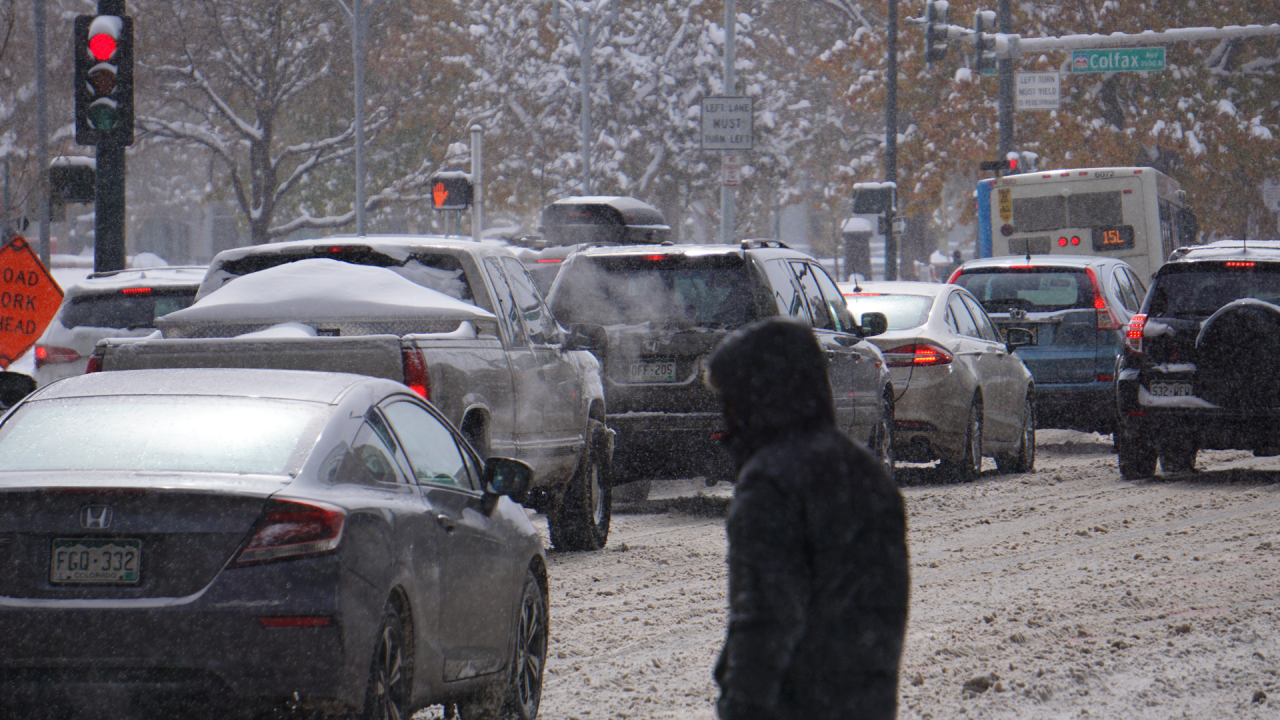 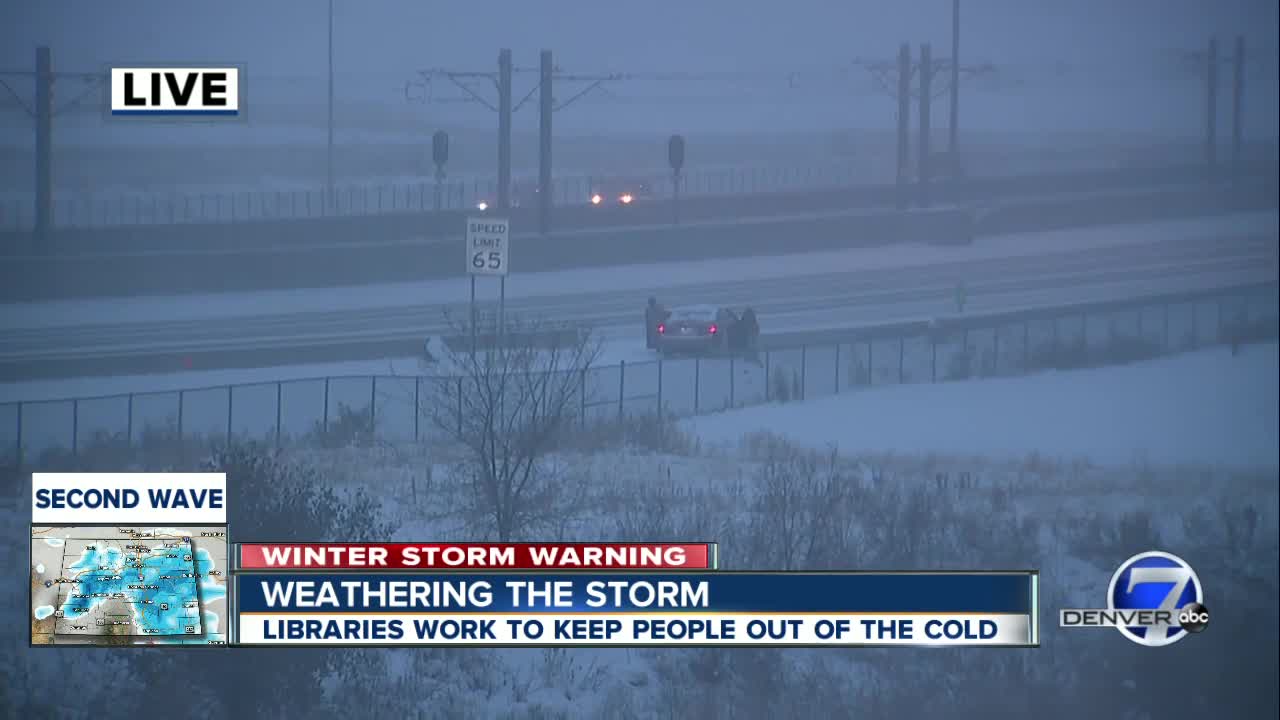 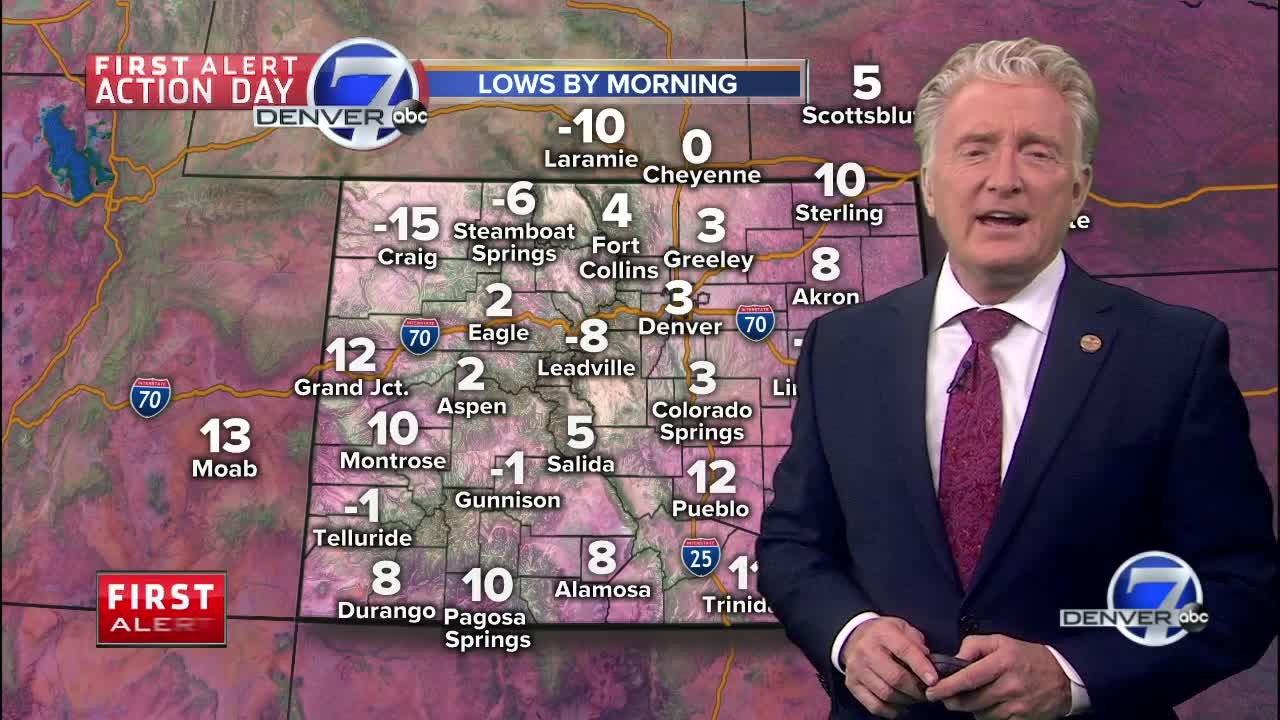 DENVER — The Denver metro area was clobbered by a quick snow squall early today! A fast fall of 4 to 8 inches of snow between 5 AM and 9 AM slicked roads and caused numerous accidents.

This is the latest forecast for additional snowfall from late this afternoon through tonight, according to the National Weather Service. Please note: This is additional forecast, not storm total.

6:42 p.m. — Eastbound I-70 and westbound Airpark Road are closed to Limon due to multiple crashe and adverse driving conditions, the Colorado Department of Transportation says.

6:02 p.m. — I-25 is closed at Raton Pass from mile marker 11 to the New Mexico border, according to the Colorado Department of Transportation.

5:57 p.m. — The southbound lanes of Colorado Highway 9 is closed between County Road 11 and Hole in the Wall Rd.

5:12 p.m. — Denver police reports only 2 weather-related crashes in the last hour, increasing the number to 143 since midnight Tuesday. They say only one puffing vehicle was reported stolen so far.

5:09 p.m. — Denver broke the lowest high temperature on record on Tuesday with a high of only 18 degrees, according to the National Weather Service office in Boulder. The previous record was 25 degrees set in 1993.

4:50 p.m. — Westbound I-70 is closed at Deer Trail due to a serious crash. There is no estimated time of when the road will reopen.

4:27 p.m. — There have been a total of 539 flights canceled at DIA due to inclement weather, according to FlightAware.com.

4:15 p.m. — The Denver Police Department reports there have been 141 crashes since midnight Tuesday. They remind drivers to take it slow, and to turn on their lights and wipers.

2:53 p.m. — Both directions of I-70 from Airpark Road to Limon has reopened after closing due to multiple crashes and adverse weather conditions.

1:08 p.m. — The Douglas County School District will have a soft release today. Parents can pick their children up at 2 p.m. All remaining students will be dismissed at regular time. Buses will run on a regular schedule.

12:37 p.m. — Eastbound I-70 has reopened at the Eisenhower Tunnel after closing for a crash.

11:46 a.m. — Eastbound I-70 traffic is being held at the Eisenhower Tunnel due to a jackknifed semi just east of the tunnel.

11:42 a.m. — CDOT is urging drivers to leave work early to head home, as the brunt of the storm is expected to hit at rush hour.

11:05 a.m. — The Douglas County School District says they will remain open and on a normal schedule today. All after-school activities are closed.

10:53 a.m. — Both the Cherry Creek School District and Aurora Public Schools have announced that they will release students two hours early. JeffCo Public Schools said they will have an on-time dismissal today.

9:23 a.m. — The Denver Fire Department is headed to a rollover crash at E. Dartmouth Avenue and S. Tamarac Drive. Traffic on I-225 is starting to thin out.

8:44 a.m. — According to the National Weather Service, the Front Range and foothills could see 8 to 16 inches of snow between today and noon Wednesday. The northern and central mountains could see the same amount and the plains will likely get 6 to 12 inches. The cold front that came through earlier today brought heavy snow across the area this morning, but it will diminish as it continues south.

It might be a chilly 20°F this morning, but our California sea lions, Nick and Luci, are enjoying a nice relaxing soak in their heated pool. So enjoy this video, because due to today's snowy weather, Denver Zoo is closed for the day. pic.twitter.com/WJlp0nWj1D

8:14 a.m. — Denver Public Schools announced that all field trips and after-school programs have been canceled. Schools remain open on a normal schedule.

7:50 a.m. — The Denver International Airport is seeing snow this morning and is expecting heavier snowfall later today. Flight delays are likely. Check your flight status with your airline before you leave for the airport!

7:40 a.m. — Drive times are extra slow this morning, so leave extra time to get to work!

Here are the 7:30 am drive times around town. pic.twitter.com/SmYHJizEV4

6:59 a.m. — Colorado State Patrol in Boulder says conditions are worse today than Monday. Remember to drive slow, leave space between you and the car in front of you and give yourself extra time to get to your destination.

6:20 a.m. — A crash occurred in the southbound lanes of I-225 after Parker Road on the left shoulder.

6:11 a.m. — There is a crash in the northbound lanes of I-25 just after I-225 before Hampden in the left lane. It has been moved closer to Hampden and into the right exit ramp lane. Traffic remains slow in this area.

5:26 a.m. — A crash has been reported near DIA on outbound Pena Boulevard close to Tower Road.