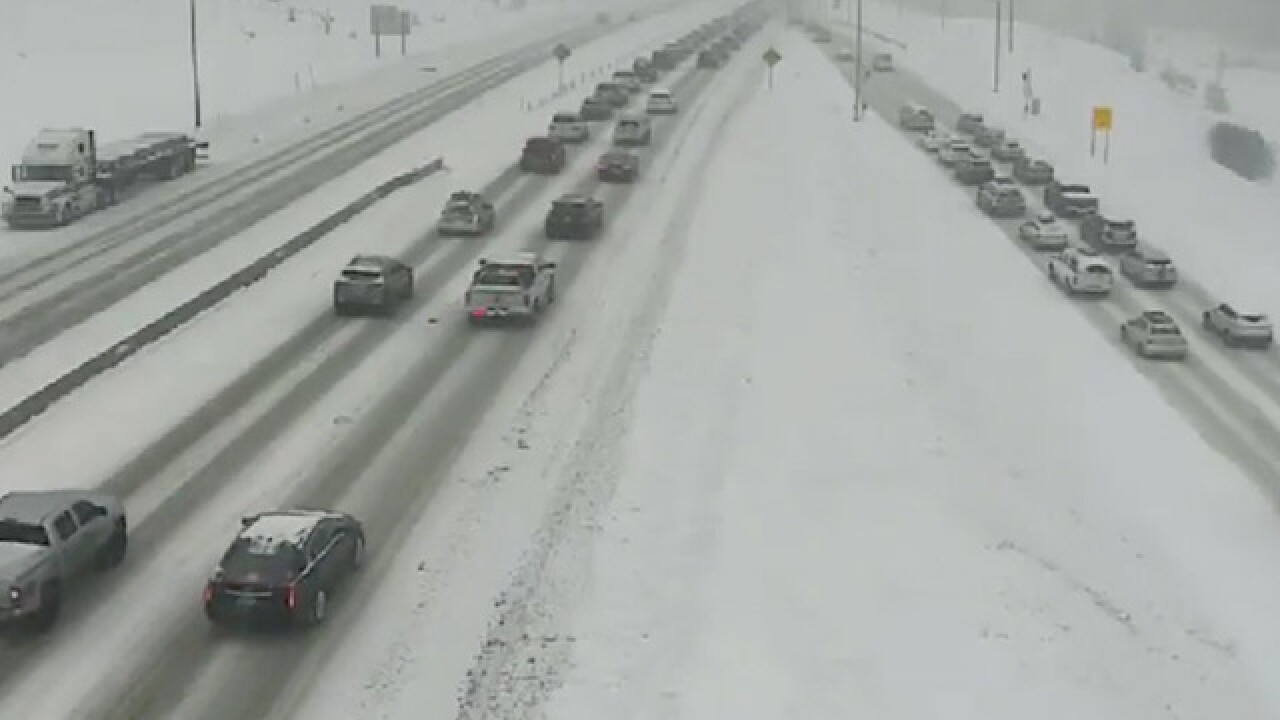 7:56 p.m.: The Colorado State Patrol is providing helpful hints for drivers around the state tonight, as wintry conditions will continue into Monday morning.

Hint before bedtime: the roads are still going to be bad in the morning, so plan your commute tonight. Get plenty of rest, be patient, plan on a longer drive time, and leave plenty of space. Monday...yippie. pic.twitter.com/vulFwjAoC8

7:51 p.m.: US 385 is also closed both directions from Wray to Holyoke because of blowing snow causing low visibility.

7:50 p.m.: US 40 is closed both ways from Cheyenne Wells to Kansas due to blowing snow causing low visibility, according to CDOT officials.

6:35 p.m.: Denver Public Schools will have a one-hour delay start for all schools starting at 8:30 a.m. or later. Schools not under this timeframe will be operating at normal schedule, according to DPS spokeswoman. Check out our SCHOOL CLOSINGS PAGE for more listings.

Denver Public Schools is implementing a delayed start for selected schools on Monday, Jan. 22. This means all schools starting at 8:30 a.m. or later will delay their starting times by one hour. All other schools are operating on normal schedules. More info https://t.co/rpfpgcCmPs

Ending the day with about 200 cancelled flights or 15% of the daily schedule. Another inch of snow is possible for the rest of the evening. Drive with care as crews remain on airport roads. pic.twitter.com/U7riFuNfen

5:58 p.m.: Weld County Road 54 between Weld County Road 17 and Highway 257 are now closed out of concern for the public, county officials told Denver7. This section is north of Johnstown and Milliken, south of highway 34. Snow gates will prevent traffic from using this route until our crews determine it is safe to do so.

5:42 p.m.: A crash on US 6 Tunnel 2 has all lanes blocked on that section of the highway. CSP is advising you use another route.

4:12 p.m: At least three schools will be closed in Colorado tomorrow due to this snowstorm. Check the full listing on our school closings page.

4:10 p.m.: Eastbound I-70 is now closed from Aurora to Kansas due to weather conditions, according to the CSP Limon division. Both directions of I-70 closed from Limon to the Kansas border.

I-70 East Closure UPDATE: FROM CDOT TOC WB I70 remains closed Limon to Burlington. EB I-70 now closed from Air Park Rd to Burlington due to adverse weather conditions.

2:54 p.m.: I-70 closed from Limon to Burlington in both directions because of multiple accidents and whiteout conditions, per CSP Limon officials.

2:15 p.m.: Heavy traffic is increasing on EB I-70, per CDOT officials. Up to two hours travel time from Silverthorne to Denver.

12:56 p.m.: Approximately 190 flights canceled at DIA due to winter weather, per FAA air traffic program officials. Flight delays are averaging up to 2.5 hours.

12:11 p.m.: The National Weather Service in Boulder warns residents to avoid travel "unless absolutely necessary" as conditions in eastern Colorado have rapidly deteriorated.

Conditions have rapidly deteriorated in eastern Colorado where a Blizzard Warning remains in effect until midnight tonight. Please avoid travel unless absolutely necessary. Thank you for the report. #COwx https://t.co/jb4jFJfUy7

12:06 p.m.: CSP Limon officials are warning drivers that conditions on highways are "progressively getting worse."

Roads are progressively getting worse. The weather forecasters nailed this one! Let’s give them a hand👏. CDOT is doing their very best, but it is going to continue to get worse. Help us out today and travel tomorrow when we have a chance to get everything cleaned up. pic.twitter.com/fw9IaV2X8Z

10:06 a.m.: The Colorado State Patrol - Golden division is reporting a serious crahs on US 285 between Pine Junction and Elk Creek Road in Jefferson County.

CRASH - Serous crash on US 285 between Pine Junction and Elk Creek Rd, near milepost 230. Be alert for traffic detours and possible closures.

As of 9:30 a.m., all Aurora recreation centers and classes are operating as expected, the Central Library and Aurora History Museum are open, and the 2 pm performance of Hedwig and the Angry Inch at the Aurora Fox is a go. If you have to go out, take it slow and easy.

9:09 a.m.: Snow and ice on the roadways in Limon, and the same thing is happening from Aurora to Kansas, CSP officials say. They urge people to stay off the roads today, if possible.

Currently the conditions around Limon. The roads are the same from Aurora to Kansas. That is snow and ice on the roadway. CDOT has been out all night, but there is only so much they can do. Blizzard conditions expected later this evening. Stay off the roads if you can today! pic.twitter.com/mZT4HEGG2X

Airline cancellations are at 154 but conditions are improving a bit. Check your flight status.

The city deployed 37 trucks on the leading edge of the storm and pretreated problem areas such as bridges. About 2-1/2 to 3 inches of snow has already fallen, w/ another 2 in. expected. Road conditions are snow packed; please allow extra travel time. Aurora is on Accident Alert.

7:12 a.m.: Denver Public Works has plows out in full force, according to Denver7's Amanda del Castillo. Big plows on the main streets; small plows taking a pass down the side streets.

6:55 a.m.: The city and county of Broomfield are on accident alert, meaning troopers and other law enforcement officials cannot respond to a large volume of vehicle crashes.

5:25 a.m.: Denver International Airport reports about 133 flights have been canceled today due to winter weather. Check your flight status.

Not a lot of change so far with about 133 flights cancelled today due to winter weather. Crews are deicing the runways and airlines are deicing aircraft. Drive with care and check your flight status. #cowx pic.twitter.com/Ead7Fa8TXy

1:52 a.m.: The City of Aurora is on accident alert, per an official on Twitter.