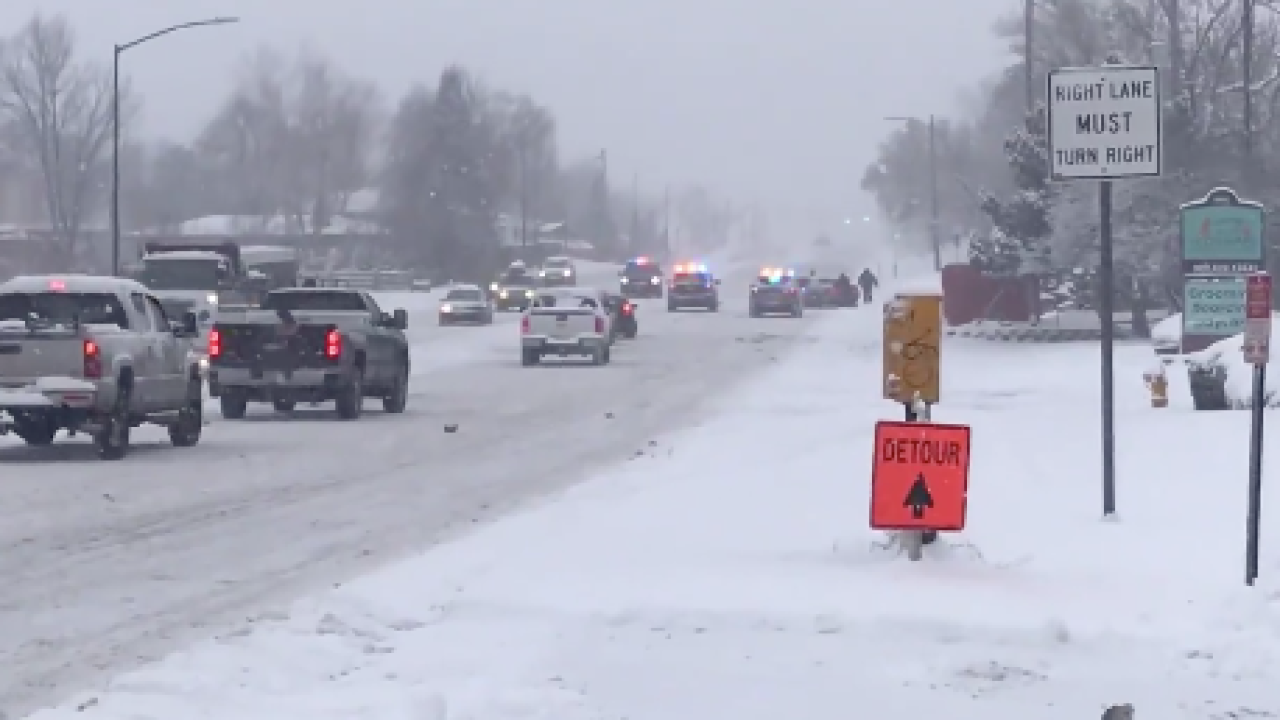 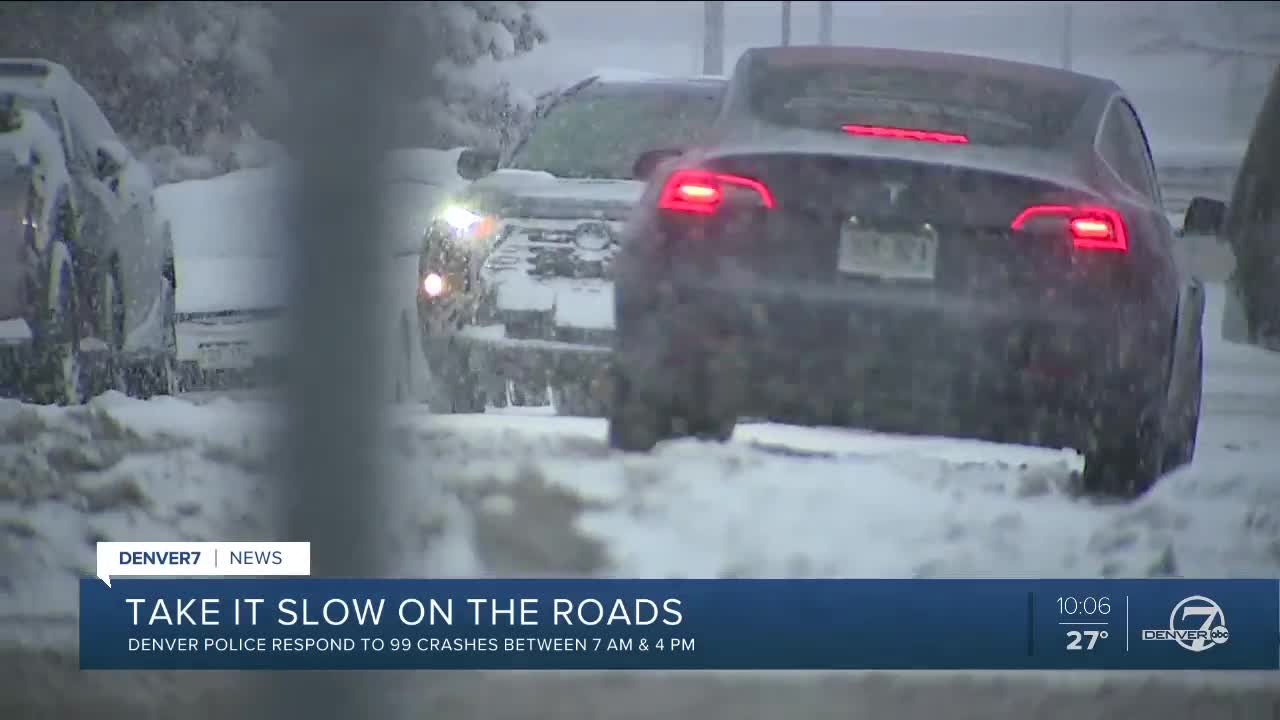 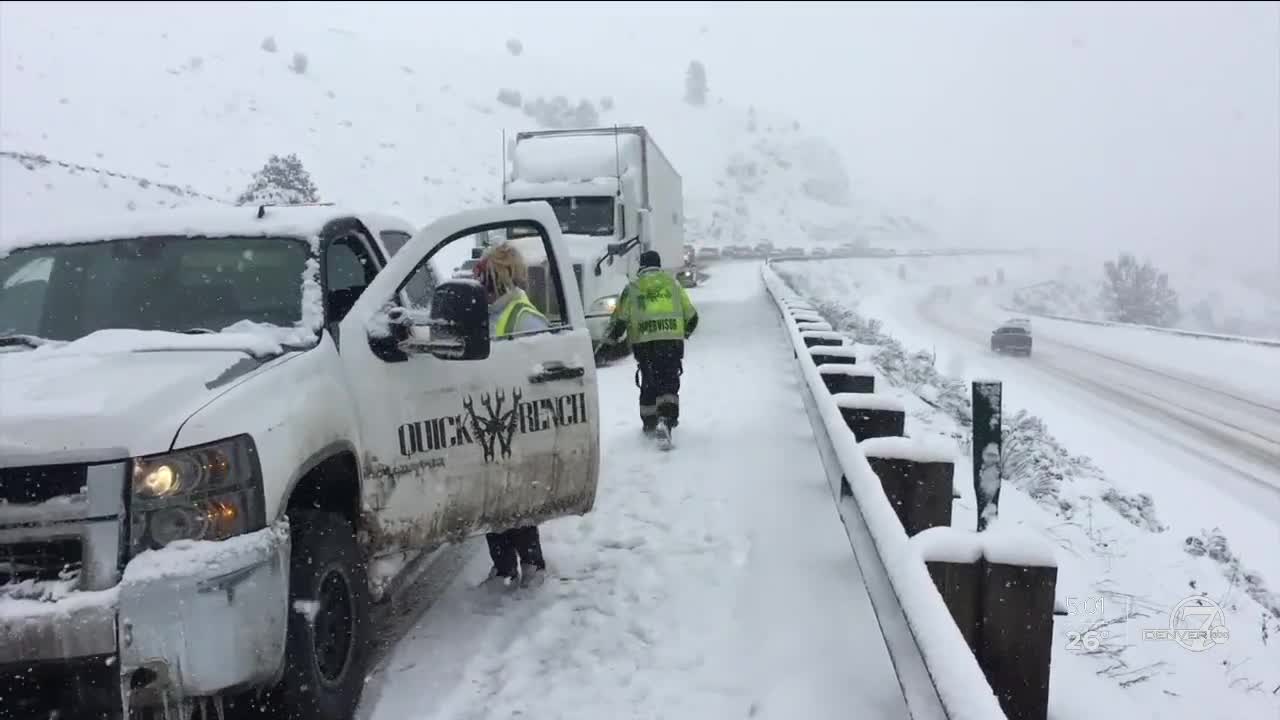 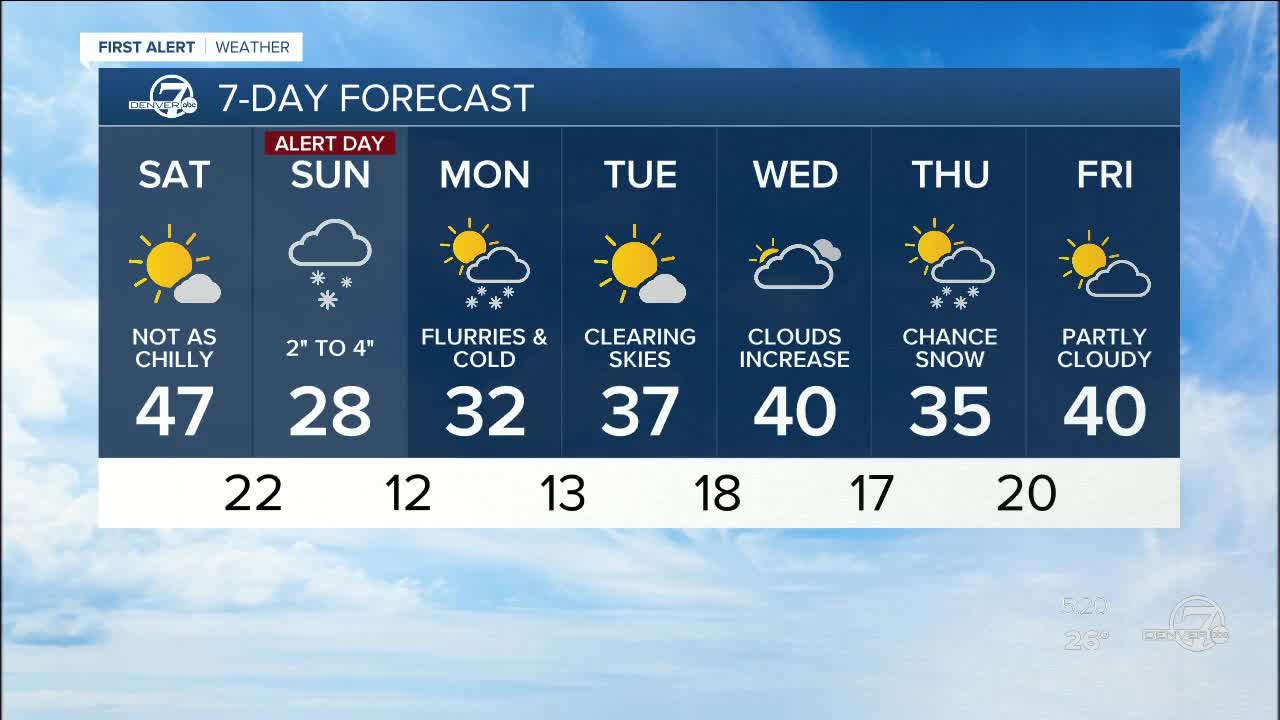 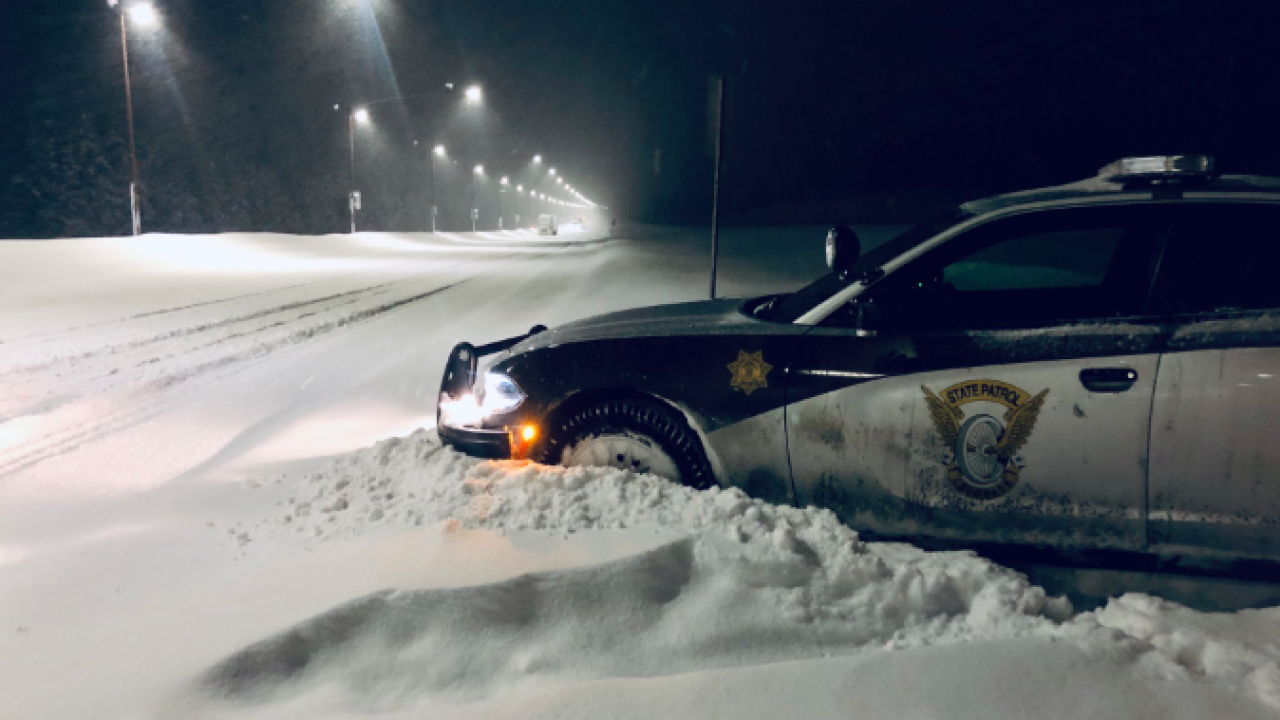 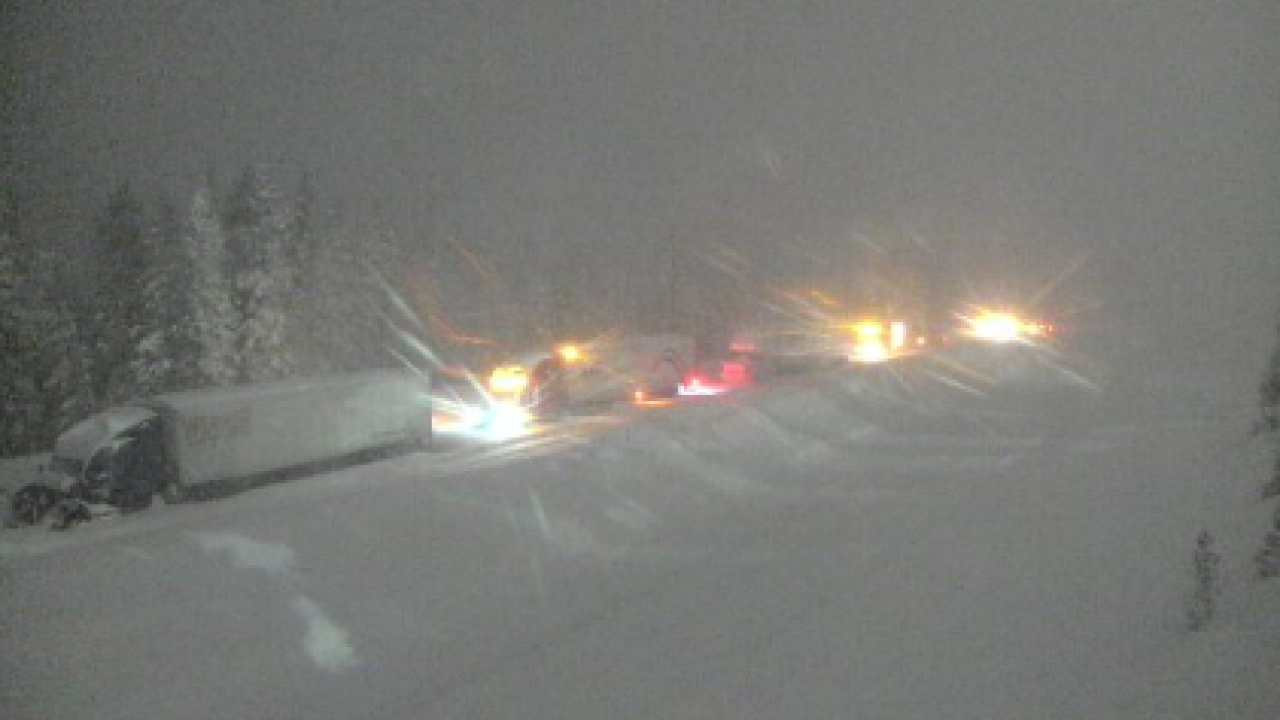 DENVER — The Denver area saw the brunt of the storm overnight, and it will continue off and on throughout the day Friday.

Total accumulation Friday will be about 4 inches. This afternoon, we'll barely reach freezing.

Heavy snow in the mountains was already causing travel issues along Interstate 70 on Thursday, and the problems likely won't end until the weekend as snow continues Friday. As much as three feet of new snow could accumulate in some areas of the high country through the end of the day, and wind gusts of up to 60 mph will cause blowing snow and visibility issues through the higher passes. Here in Denver, the light snow between Thursday evening and through Friday will bring about 4 inches of snow. Looking ahead, more snow is expected Sunday.

Avalanche danger is high today, so avoid going into that sort of terrain when possible.

I-70 is already scheduled to shut down at Vail Pass on Friday morning for avalanche mitigation. The closure begins at 7 a.m. and should last one to four hours.

Here are the latest updates as the snow continues across the state:

9:30 p.m. — DIA is reporting 917 delays and 148 cancellations due to severe weather conditions. Check your flight status with your airline before you head out.

9:26 p.m. — CDOT says its Avalanche Mitigation Team, in partnership with the Colorado Avalanche Information Center, says they will reassess avalanche danger Friday night into Saturday morning to determine if any mountain highways will be closed over the weekend. They advise travelers to expect and prepare for safety closures either way.

9:12 p.m. — Highway 285 is back open in both directions from Fairplay to Kenosha Pass, CSP Florence says.

8:55 p.m. — The westbound lanes of I-70 are back open from Morrison to the Eisenhower Tunnel, CDOT says, adding extreme driving conditions remain in the area with the potential for closures through the weekend. Expect extended delays for the time being.

8:47 p.m. — Westbound I-70 has reopened from Georgetown to the Eisenhower Tunnel, CDOT says.

6:35 p.m. — The City of Broomfield is on accident alert due to current road conditions. If you are in a crash with no injuries/no alcohol, please exchange driver and insurance information and report it to the Police Department in the next few days.

6:27 p.m. — Due to the amount of snow that has fallen at Copper Mountain, the resort will have the front side of the mountain open while patrol continues to work on the areas surrounding Sierra, Rendezvous, Resolution, Mountain Chief and Blackjack. Tucker Mountain will not open tomorrow. Get the latest updates here.

6:23 p.m. — Shields St. is closed in both directions at westbound Harmony due a serious collision. The streets are expected to be closed for several hours while invetsigators comb the scene. Drivers in the area should find alternate routes.

6:05 p.m. — The rush hour in Denver ended with 122 crash reports reported between 7 a.m. and 6 p.m. Police also said one "puffer" was stolen. They advise drivers who plan to head out tonight to take things slowly, allow for extra stopping distance and clear your windows and mirrors.

5:10 p.m. — The Denver Police Department reports there have been 108 crash reports between 7 a.m. and 5 p.m. Friday. They advise drivers to take it slow during their commute.

4:31 p.m. — CDOT is once again warning drivers to prepare for delays, closures and adverse weather conditions if traveling to the mountains:

"The Colorado Department of Transportation advises motorists wanting to travel to or from the high country to stay where they are currently located through this weekend."

4:21 p.m. — Westbound I-70 is closed at the Georgetown exit due to multiple spun out vehicles, CDOT says.

4:18 p.m. — Berthoud Pass does not appear to be closed, according to the Grand County Office of Emergency Management, though the National Weather Service is estimating wind speeds in Berthoud Pass at 25-30 mph, which will be ramping up to 40-60 mph, lasting through Saturday evening. Drive at your own discretion.

3:52 p.m. — The Summit County Sheriff's Office has issued this stern warning for drivers in Colorado:

3:48 p.m. — Town of Frisco officials say Summit County and the American Red Cross will open an overnight shelter at Summit Middle School at 6 p.m. The middle school is located at 158 School Rd. in Frisco, Colo. Pets can be sheltered at the Summit County Animal Shelter, 58 Nancy's Place, Frisco, Colo.

Heading into the evening we're seeing systemwide bus delays of up to 20 min due to weather/road conditions. Mountain bus routes 30-60 min due to chain up & hwy closures. Light Rail delays up to 10 min, Commuter Rail on schedule. Be safe, stay warm, and thank your operator!

3:46 p.m. — Avoid Highway 85 between 16th and 22nd Streets in Greeley. The road is closed due to downed power lines at 18th St. There is not estimated time for the reopening of the road. Use Frontage Road and 1st Ave. as detours, officials say.

3:32 p.m. — The Denver Department of Transportation and Infrastructure says residential plows will be wrapping up by about 6 p.m. Friday.

3:23 p.m. — Rabbits Ears Pass and Berthoud Pass are closed due to severe weather in the high country, according to the Grand County Office of Emergency Management. Officials say it's unknown at this time if Berthoud will be "longstanding" as crews are currently cleaning up the avalanche. Highway 134 from Highway 40 to Toponas, including Gore Pass, is now closed.

1:32 p.m. — Avalanche control between Robins Roost and mile marker 249 on eastbound Highway 40 has lanes blocked due to a small slide. Expect delays.

12:30 p.m. — Eastbound I-70 at Vail Pass has re-opened, according to CSP Eagle. Closures have been frequent along I-70 over the last two days, so this may not last long. But for now, the eastbound lanes are open.

12:18 p.m. — CDOT says the eastbound lanes of I-70 are closed at Genesee due to crashes. There's no estimated time for reopening.

Loveland Ski Area announced it will not open Friday because of high winds but will be back open Saturday at 8:30 a.m.

9:30 a.m. — The southbound lanes of CO 93 are open between 64th Avenue Parkway near Arvada and CO 128 near Superior. Northbound remains closed.

9:09 a.m. — CO 93 is closed in both directions between 64th Avenue Parkway near Arvada and CO 128 near Superior. There are multiple crashes in the area.

8:28 a.m. — CDOT tweeted out a live view of the Eisenhower Tunnel. Watch it here.

8:16 a.m. — Avoid Kipling near 38th, if possible. Several cars are stuck in this area and police are helping to push cars. Watch the video here.

5:12 a.m. — US 40 is closed in both directions between the Berthoud Pass Summit and I-70 (near Empire) for avalanche control.

5:04 a.m. — Multiple mountain passes — including Vail Pass, Loveland Pass, Hoosier Pass and the Eisenhower Tunnel — in Eagle County and Summit County are closed. As of now, there's not ETA on them reopening.

4:29 a.m.: Englewood Public Schools has closed.
4:20 a.m.: Littleton Public Schools has closed.
4:39 a.m.: NWS Boulder said that heavy snow, strong winds and white-out conditions will be prevalent in the mountains. Travel will be "impossible at times," NWS reports. Narrow but intense bands of snow may form later near the I-25 corridor. Snowfall rates are expected at 1-2 inches per hour.

3:05 a.m.: Westbound I-70 is closed at Herman Gulch, which is about three miles east of the Eisenhower Tunnel, for avalanche control.

2:00 a.m.: Red Cross set up shelter at the Silverthorne Recreation Center for travelers stranded by the I-70 road closures. About 73 people were being helped at the shelter as of 2 a.m.

2:00 a.m.: Red Cross set up shelter at the Silverthorne Recreation Center for travelers stranded by the I-70 road closures. About 73 people were being helped at the shelter as of 2 a.m.