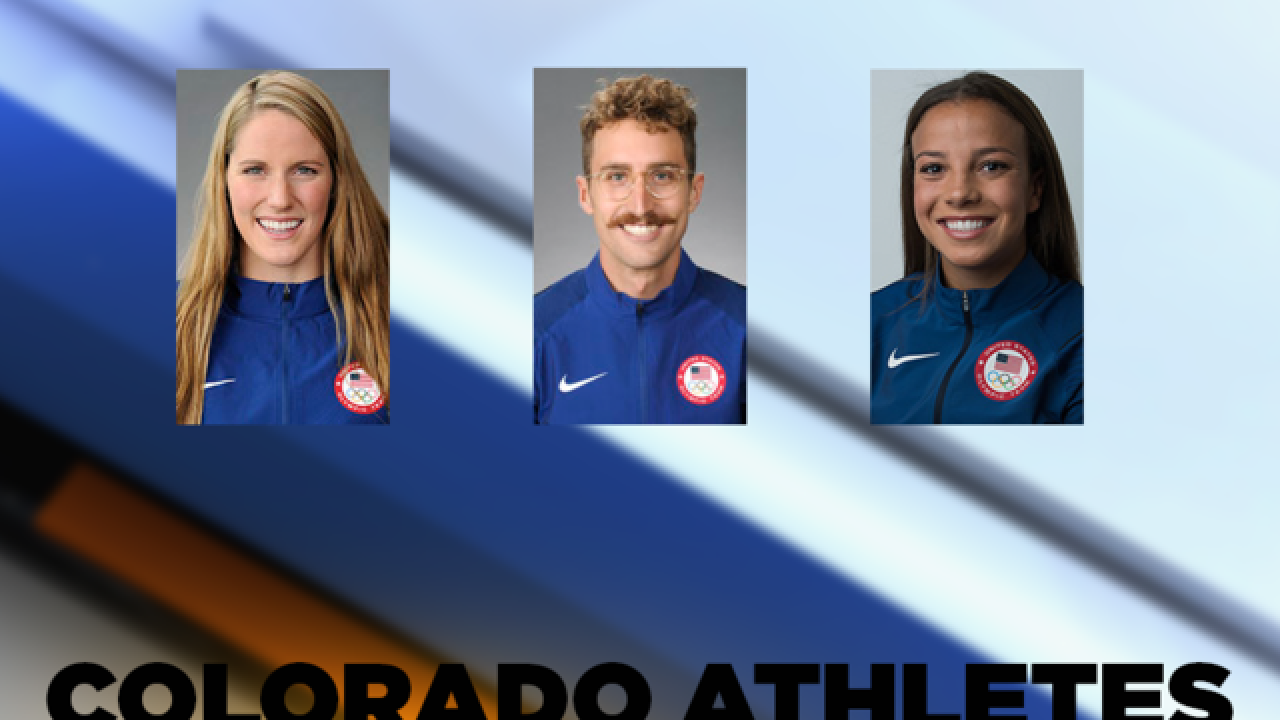 Many of the athletes competing in the Olympics in Rio have Colorado ties. They were born here or live here. Here's the list of athletes with Colorado ties from TeamUSA.org:

Abbott was born & raised in Boulder. She took up cycling as a means of cross training for swimming.

She practices and teaches yoga in Boulder.

His favorite food is bacon, according to the TEAM USA website.

Bor was born in Kenya, but he and his brothers gained American citizenship by joining the U.S. Army.

He is currently a sergeant serving at Fort Carson in Colorado Springs.

Coburn was born in Boulder, but grew up in Crested Butte, graduating from Crested Butte High School in 2008 and the University of Colorado in 2013.

DeLoach was born in Florida and went to High School in Alaska, but she went to Colorado State University and calls Fort Collins her hometown. At CSU, DeLoach got her undergad in Psychology, Human Development and Family Studies and her masters in Occupational Therapy.

She enjoys painting, outdoor activities and crocheting. She earned a bronze medal at the 2012 Olympic Games in London.

Finley was born in Kansas City but went to Buena Vista High School, graduating in 2009.

He's an eight-time NCAA All-American who set a national high school record in the discus throw with a toss of 72.09 meters during the High Altitude Challenge in Alamosa, Colorado.

After earning five medals at the London Olympics (4 golds, 1 bronze), Franklin, from Centennial, is competing in three events this year.

Franklin began swimming when she was two years old and she enjoys reading, dancing, baking, volunteering, reading and journaling.

Her TEAM USA biography says she makes a point to do small good deeds before every swim meet.

Gray went to High School in Lakewood (Colorado) and Marquette, Michigan. She attended DeVry and the  University of Colorado-Colorado Springs.

Grotts, from Durango, got into mountain biking because of his brother Donnie.

Horan, from Golden, was the first American female to sign a professional contract straight out of high school. In 2012, she opted to bypass college and signed to play professionally for Paris Saint Germain in France.

King is from Seattle, but is living and training in Colorado Springs.

She just started lifting full-time in 2012 and now she's competing at the Olympics.

Her favorite foods are sushi and club sandwiches.

Korir was born in Kenya but moved to the United States in 2009.

When he arrived in the U.S., he only knew a few English phrases and carried one suitcase.

Now he's living in Colorado Springs and competing in a sport that he got involved competitively ten years ago.

Rio is the third Olympic games for Phinney, from Boulder.

Phinney speaks Italian because he lived in Italy for three years as a teenager while his parents ran a European bike touring company. His mother was the first women’s cyclist to win an Olympic gold medal in the 1984 road race. His  mother also represented Team USA at the 1972 Olympic Winter Games in speedskating. His father won a bronze medal in the team time trial at the 1984 Olympic Games and was also a Tour de France stage winner.

Pinkleman earned a degree in Criminal Justice this year.

Pirozhkova was born in Russia and moved to the U.S. when she was three years old. She lives in Colorado Springs.

Potter went to High School and college in New Mexico, but lists Denver as her hometown. Potter began playing rugby as a freshman in college.

Potter was diagnosed with stage 3 Synovial Sarcoma cancer in 2014, but she finished radiation in 2015 and competes in the Olympics this year.

Provisor, who lives in Colorado Springs, is a father and husband.

His wife, Leigh Jaynes, is a two-time World Team member in women’s wrestling…

Pugh, who just graduated from Mountain Vista High School in Highlands Ranch, is the youngest player on the U.S. Women’s National Team.

She plans to attend the University of California, Los Angeles in the fall.

This two-time Olympian was born in Colorado Springs.

He began shooting in 1996 in U.S. Marine Corps matches and spent eight years with the USMC and more than eight years in the U.S. Army.

This first-time athlete is an aspiring Air Force fighter pilot. He boasts a perfect score on the U.S. Air Force physical fitness test.

Simpson grew up aspiring to be an equestrian Olympian, and racked up a three championships in the NCAA for steeplechase.

Smith has Olympics coursing through his veins. His mother competed in the 1984 Olympics in Los Angeles -- 11 years before giving birth to Clark.

This buff Olympian holds a number of championships over several years of competing on the world stage, although he has yet to compete in the Olympics.

One of his favorite hobbies is dancing.

Thielke is a Wisconsin native who lives in Colorado Springs currently. He has been competing in wrestling since high school, when he was a three-time state champion.

Valente is an accomplished cyclist who helped USA Cycling make history in the world Championships when she helped the team win the first world title in team pursuit.

This Denver native loves cycling so much, she raced off on her bicycle one day after marrying her hustband Travis Woodruff. Attached to her helmet was her veil. She came in ninth place in that U.S. grand prix race in Fort Collins.

Note, TEAM USA lists several more athletes as living in Colorado Springs presently, as many Olympians settle there for several years as they train.