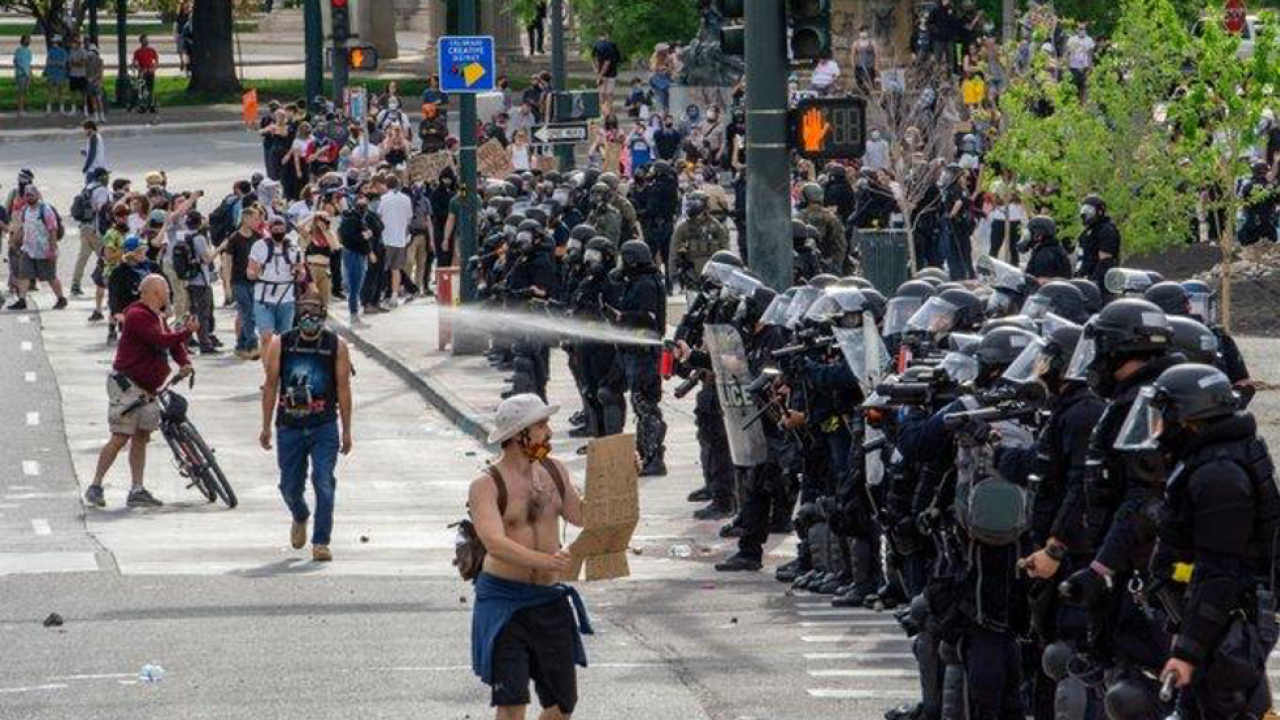 “For seven days, (Denver police) have shown, across hundreds of incidents and just as many officers, that the use of these ‘less than lethal’ ordinances is being done without regard to the constitutional rights of protesters and bystanders,” the complaint reads.

In one video shared in the complaint, a person asks a police officer, “May I ask you what’s going to happen at 8 (p.m.)? Sir?” On the day of the video, curfew was set to begin at 8 p.m. The officer is heard responding saying, “What’s going to happen is we’re going to start beating the f--- out of you.”

Another video shows a protester verbally confronting an officer, who then sprays him with pepper spray.

During one afternoon of protests, a person filmed police approaching a peaceful protester who was standing with a sign. An officer pepper sprayed her. The complaint claims officers also ripped up the sign she was holding.

In another video filmed during daytime hours, a peaceful protester documented a team of police in riot gear on a vehicle. When one of the officers noticed the person filming the video, the officer shoots him with a pepper ball, according to the complaint.

In addition, the complaint cites an Instagram picture posted by then-DPD officer Thomas McClay showing a picture of three officers with the caption, “Let’s start a riot.” McClay was fired on June 2.

The complaint goes on to describe attacks on journalists, including a Denver7 photojournalist who was hit four times by projectiles fired by police. A New York Times reporter posted a picture of a Denver Post reporter’s injury, writing, “He screamed ‘Press’ shortly before being hit as officers fired on protesters,” according to the complaint.

The document also touches on attacks on medics as they tried to render aid to injured protesters. In one video, a protester was hit in the head with some sort of projectile and appeared to have been knocked out. As medics rushed in and dragged him away from police, officers continued to fire pepper balls, according to the complaint.

Two of the Denver residents who filed the lawsuit — Gabriel Thorn and Michael McDaniel — both worked as medics during the protests.

Thorn, a veteran of the Armed Forces, said he wore a red cross on his helmet and backpack. He said he was shot at with pepper balls and tear gassed.

“Thorn observed police officers aiming at bodies and heads when firing rubber bullets,” the complaint reads. “Having served in the military and been trained to use rubber bullets, Mr. Thorn was struck that these officers had not been trained to use them correctly. His training in the military made clear that these bullets were to be aimed at the ground and never directly at people, even in war zones.”

McDaniel said on Saturday afternoon, police had created a cloud of tear gas on the corner of E. Colfax Avenue and Lincoln Street and he tried to help a protester who was choking and on the ground. With his back to the police, he kneeled to help the person. He claimed that police targeted and shot and him and the protester with pepper balls. McDaniel, who was wearing a helmet, said police were aiming at his head. He was not injured.

The other two complainants — Agazi Abay and Amy Schenider — outlined their encounters with police while protesting. In the complaint, both said they were doing so peacefully, but were tear gassed and shot at with pepper balls, despite not hearing any oral commands from police.

Schenider said she was arrested and placed in a windowless van with other protesters when one started to have an asthma attack. When the other protesters asked police to call for medical help, “the police officers laughed and said: ‘If you wanted to breathe, you should have stayed home tonight,’” according to the complaint.

The complaint reads that all of these actions deprived protesters of their constitutional rights under the First, Fourth, and 14 Amendments.

The complainants say this shows that Denver police aren’t using these weapons in limited ways, but rather whenever they feel they need to suppress expression or deter documentation of their actions. They claim it also shows that the officers wished to be feared.

The complaints allege that the city of Denver has policies of:
· Violating the freedom of expression
· Deploying chemical agents and less-lethal ballistics against protesters
· Failing to train officers on how to use that equipment
· Failing to warn before using those devices
· Targeting medics and press
· Infringing on people’s right to assemble and protest

The plaintiffs are asking the city of Denver to temporarily bar the police department from using tear gas, rubber bullets, pepper balls, pepper spray and flashbangs.

The complaint was filed by Ascend Counsel, LLC attorney Edward Milo Schwab. It can be read in full here.

When Denver7 reached out to DPD, Jay Casillas with the media relations unit said the city attorney’s office is reviewing the lawsuit and that DPD didn't have a comment as of Friday around noon.