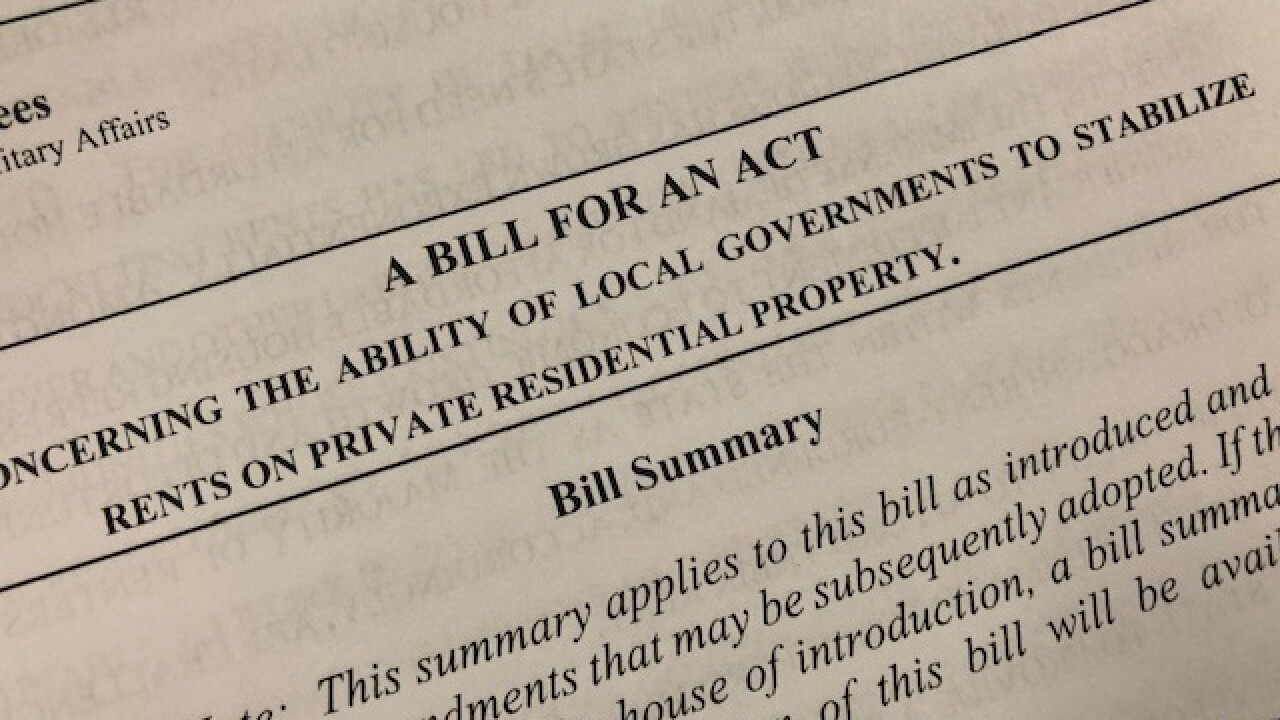 DENVER -- Members of the Senate State, Veterans and Military Affairs Committee shortened their meeting Wednesday afternoon because of the winter storm.

When they return, they will reschedule the debate on a bill that would allow local governments to enact rent control policies.

Several lawmakers and over 50 organizations have signed on in support of SB19-225.

Orrell, who deals with physical disabilities, said she has struggled to cope with escalating rent in the Mile High City.

"I had to get a roommate," she said, "after the building's new owners did away with vouchers."

Without a roommate, Orrell said she would likely have been displaced.

Rent Out of Reach

Celeste Martinez, of the group United for a New Economy, said there are 734,527 Coloradans who rent apartments, and that half of them are unable to afford monthly rent.

"All we are seeking to do with SB19-255 is to repeal (a 1981) prohibition (on rent control) and to give local municipalities and counties the power to make those decisions," said Sen. Julie Gonzales, D-Denver, one of the sponsor's of the bill. "We believe that local communities are best situated to be able to make these decisions for themselves."

Opponents acknowledge that rents have gone up and that wages aren't keeping pace with the cost of living, but they say rent control will exacerbate the problem.

"People are frustrated and I understand that frustration," said Teo Nicolais of the Harvard Extension School. "The problem is that rent control is not the solution."

Nicolais, who also sits on the board of the Colorado Apartment Association, said, "the evidence as to whether or not rent control interferes with new production of housing is still being contested, but what is not being contested is that rent control reduces rental housing supply."

"Whenever you put a cap on prices, the amount that is supplied goes down, and that's what we've seen with rental housing," he said, citing a study at Stanford University that found that there was a 15 percent decrease in rental housing supply after rent control is implemented.

Sen. Gonzales took on critics by saying that Colorado is experiencing an affordable housing crisis because of the free market economy.

Nicolais countered saying it's a complicated problem and that there is no single solution.

He'd said he'd rather see more public/private partnerships to build housing where it's needed, along transit corridors and near job centers.

He'd also like to see fewer barriers to new construction.

"Cities need to work on zoning policies that address the need to build at densities that help renters out," he said.

Nicolais said rent control is not new. He said other cities and states across the country are grappling with the similar issues.

He said in Oregon, the legislature approved rent control. In California, voters turned thumbs down.

"In California, which has had decades of rent control, the voters stood up and said no more" he said. "By an 18 percent margin they defeated an expansion of rent control because they understand that rent control doesn't make housing more affordable. In fact, it makes it less affordable."