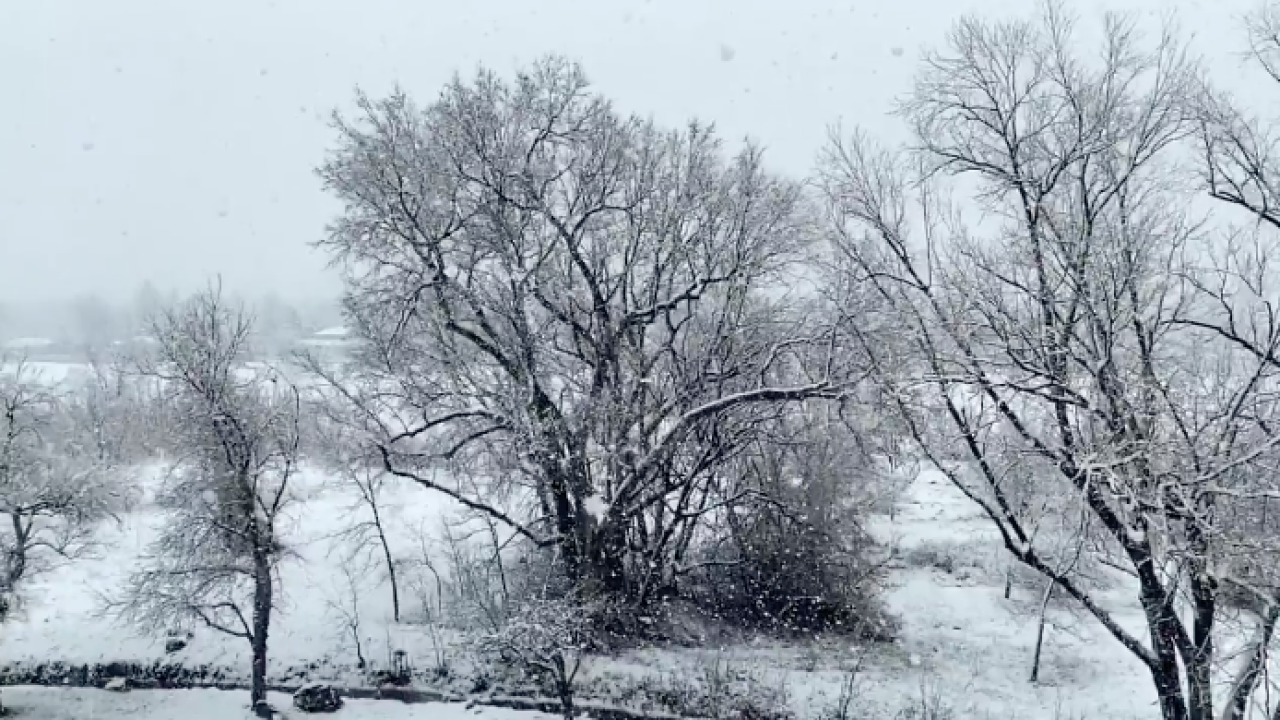 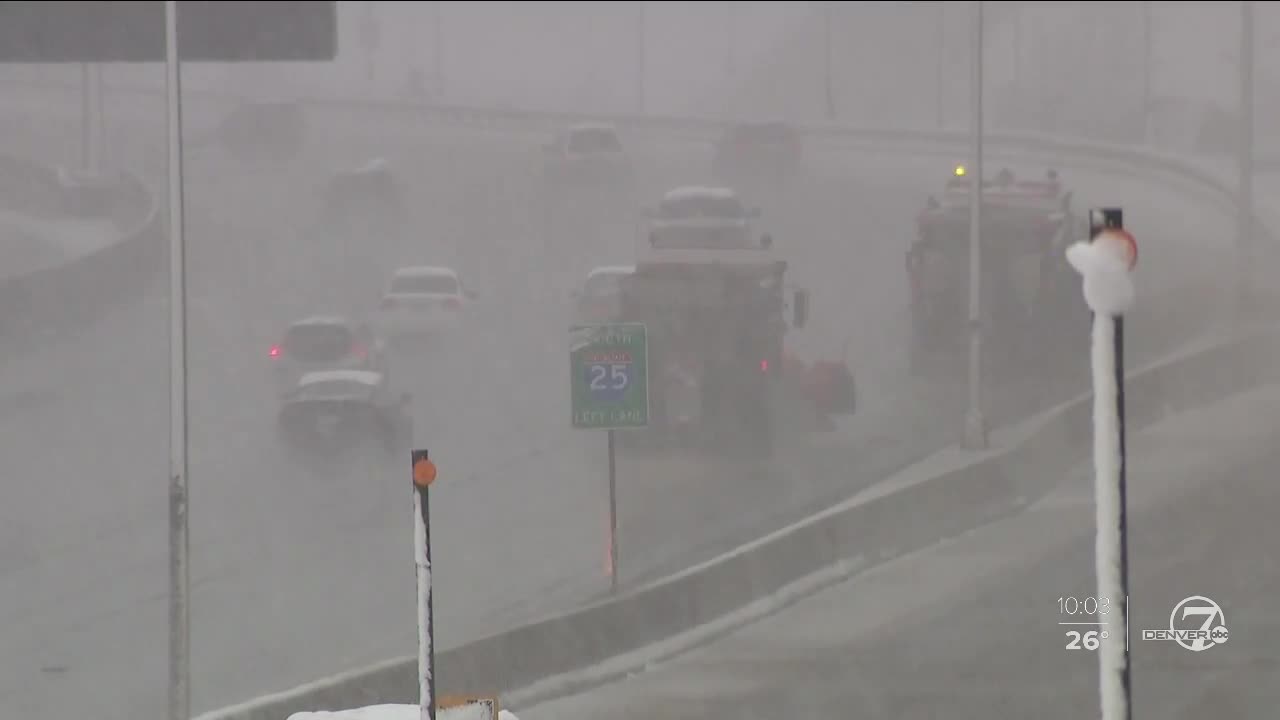 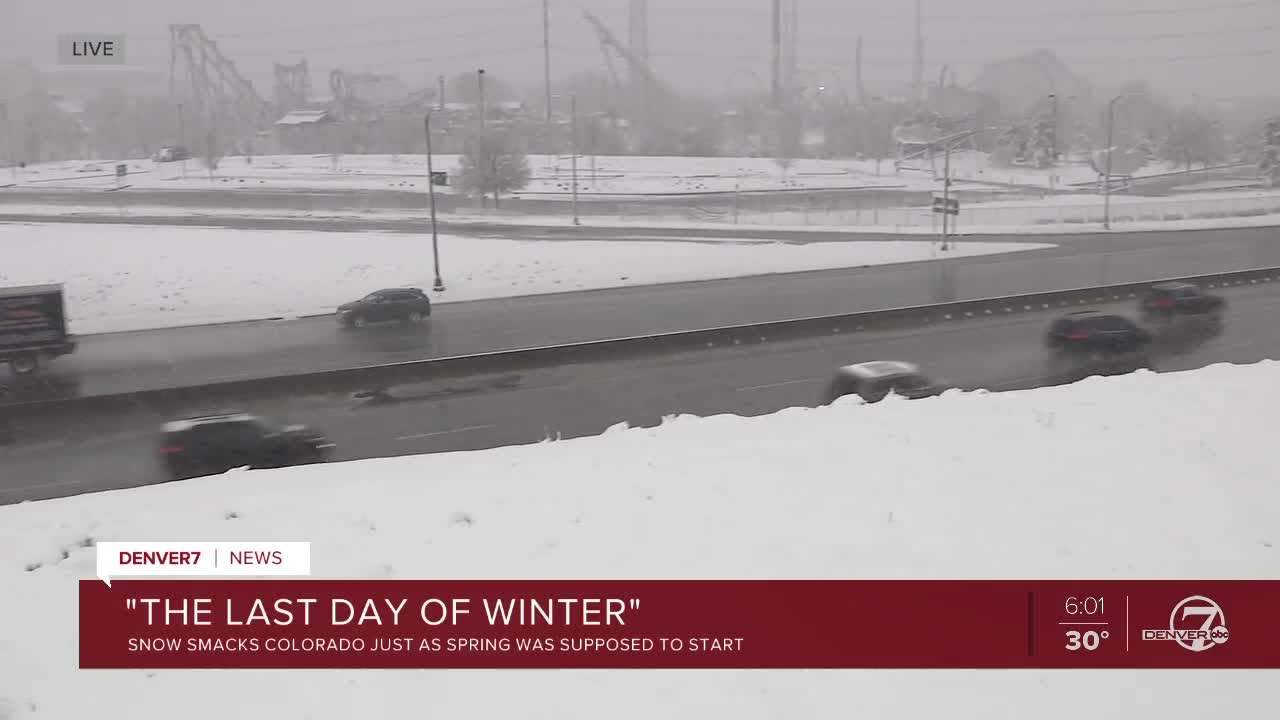 Rain turned to snow across the Denver area on Thursday morning — the first official day of spring — and it was only expected to pick up throughout the day.

The National Weather Service in Boulder's latest forecast discussion Thursday morning said "all signs point to heavier snow than our previous forecast," with 6-12 inches expected on the west side of the Denver metro and Boulder.

We were already expecting 4-9 inches across Denver and up to 15 inches in the foothills and Front Range mountains. Those snowfall projections are a wide range, but we'll see heavy bands of snow, at times, so the local amounts will vary.

The Weather Service earlier Thursday had forecasted the switch from rain to snow around noon in Denver, as warmer temperatures were expected. But the switch happened earlier, around 9 a.m., upping the snowfall forecast by 3-5 inches.

As the snow picks up, the roads will become slushy, and snowfall rates could reach 2 inches per hour in some areas.

Here's the latest snowfall projections from the Weather Service, as of 9:30 a.m. Thursday. This still calls for six inches in Denver, but note the shades of yellow and orange — indicating up to 12 inches — in and around the city.

Denver International Airport reported more than 1,091 cancellations at the airport due to inclement weather. There have been 162 delays as of 8:30 p.m.

US 40 is closed in both directiosn between County Road 23 and 1st Ave. - from Limon to Hugo - due to adverse weather conditions, CDOT says.

Denver International Airport says that while the snow has slowed down in the Denver metro area, flight delays and cancellations are possible Thursday night and Friday morning, so make sure to check your flight status before you head out.

I-70 is closed in both directions between Exit 292 - US 36; Airpark Rod and Burlington due to adverse weather conditions, CDOT says. No estimated time for the reopening of the highway.

I-25 is closed from Plum Creek Parkway to Baptist Road in northern Colorado Springs due to crashes and blizzard conditions with blowing snow and high winds. SH 83 is also closed, per CDOT. There are no alternate routes.

I-70 remained closed east of Denver, from Airpark Road to Limon, and the backup to head back west was piling up. Here's a look from the Colorado State Patrol:

This is I70 EB because of the road closure and waitiing to turn around to head back to Denver. pic.twitter.com/Lc5EbHQ6w2

Roads were slushy in Aurora heading into rush hour, and the city said it had 42 plows on city streets, working to keep the roads clear.

Forty-two plows are in service applying deicer & plowing as appropriate. Another 1 to 2 inches of snow is expected before the storm is over for this Category III storm. Current road conditions are slushy and wet w/ some small accumulations. Snow plan at https://t.co/d25IdbXRac pic.twitter.com/mIEQ3AImOS

U.S. 6 between Golden and Colorado 119, through Clear Creek Canyon, has been re-opened after a series of crashes.

This has been ongoing issue all afternoon and now I-25 is shut down again between Castle Rock and Colorado Springs. Here's the update from CSP Castle Rock:

Conditions on Monument are such that cars are northbound in the southbound lanes of I-25 at Greenland.

Visibility will be a big issue on the roads today, with wind gusts blowing snow. Here's a look at the conditions on I-25 between Fort Collins and Denver:

Low visibility along I-25 southbound between Fort Collins and Denver, passing several cars spun out along side of the highway. If you are out and about please be careful. #cowx pic.twitter.com/u2M56wcM9s

I-70 is closed between Aurora and Limon in both directions because of poor conditions. Westbound I-70 is closed at Burlington as well.

CSP Golden says there is a "pileup" on eastbound I-70 at Genesee, so the eastbound lanes are closed there and being diverted to U.S. 40. Westbound I-70 was closed from Genesee to Golden due to "extreme weather conditions" along Mt. Vernon Canyon.

U.S. 6 through Clear Creek Canyon is also closed in both directions between Golden and Highway 119 because of crashes in the canyon.

EB I-76 is closed between Exit 25 and the Nebraska border becaues of blizzard conditions.

US 287 is closed northbound between US 50 and County Road LL.

The left three lanes of NB I-25 are blocked between Castle Pines Parkway and RidgeGate Parkway because of a crash.

CO 113 is closed in both directions between US 138 and the Nebraska border.

CO 71 is closed in both directions between I-76 and County Road 84.

U.S. 34 is closed between Greeley and Interstate 76 (Wiggins).

Get the latest statewide closures at the COTrip page.

I-25 southbound is shut down south of Castle Rock after a crash involving multiple semi-trucks near Greenland, according to the Colorado State Patrol.

I-25 SOUTH GAP: Full closure of SB I-25 Plum Creek to Monument due to adverse conditions. Speeds reduced on NB I-25. Use https://t.co/BvnRvlJnNU for more info.

Heavy snow was falling in Aurora, and it was already sticking to roads in some areas. Here's a look at Hampden and Buckley:

Heavy snow and low visibility in Aurora. This is Hampden and Buckley. #cowx pic.twitter.com/JxQeCiZccp

Eastbound Interstate 70 is shut down at Vail Pass due to multiple slide-offs and crashes, according to the Colorado State Patrol. Expect travel issues in the mountains all day.

EASTBOUND I-70 Vail Pass is closed due to multiple slid-offs and crashes. Unknown clearance time. pic.twitter.com/79zQrHDHR0

U.S. 6 is shut down at Loveland Pass due to hazardous conditions on the road.

US 6: Safety closure between MM 220 and MM 229. Hazmat vehicles use Eisenhower Tunnel at top of hour, other traffic held. Delays. https://t.co/egZojrlKLs

The National Weather Service in Boulder tweeted a video of the snow falling at a rate of 1-2 inches per hour. Take a look:

The Colorado Department of Transportation is urging commuters to leave work by 2 p.m. to avoid the worst of the road conditions. Snow is expected to continue through the day, and temperatures will drop quickly later in the day. Snowfall of 1-2 inches per hour and poor visibility was expected in the Denver area this afternoon. Even heavier snow was expected near the Palmer Divide, along the I-25 Gap.

CDOT deployed 100 plows in the Denver area alone on Thursday. Motorists are encouraged to avoid I-70 in the mountains, with heavy snow expected on Floyd Hill.

With steady snow across the Front Range, some roads are starting to get slush and snow-covered. Here's a look from around the area, via the NWS Boulder and CDOT.

Snow through out the Front Range now. Roads are starting to become snow covered in places. Conditions will continue to deteriorate through the afternoon and early evening as heavy snow continues. Avoid travel if possible. #cowx pic.twitter.com/s0tqR1XHzz

Expect closures on U.S. 6 at Loveland Pass and U.S. 40 at Berthoud Pass on Thursday, as crews work on avalanche mitigation, according to Colorado Department of Transportation. Heavy snow was expected in the area, so visibility and other hazardous conditions will also be a problem.

**TRAVEL ALERT: Plan for CLOSURES on US 6 Loveland Pass and US 40 Berthoud Pass this afternoon for avalanche reduction. Safety closures may also take place if poor visibility or other extreme conditions. See https://t.co/uOU0HHbUQ6 before traveling. #COVID19Colorado #DoYourPartCO pic.twitter.com/7LI8HcHXwf