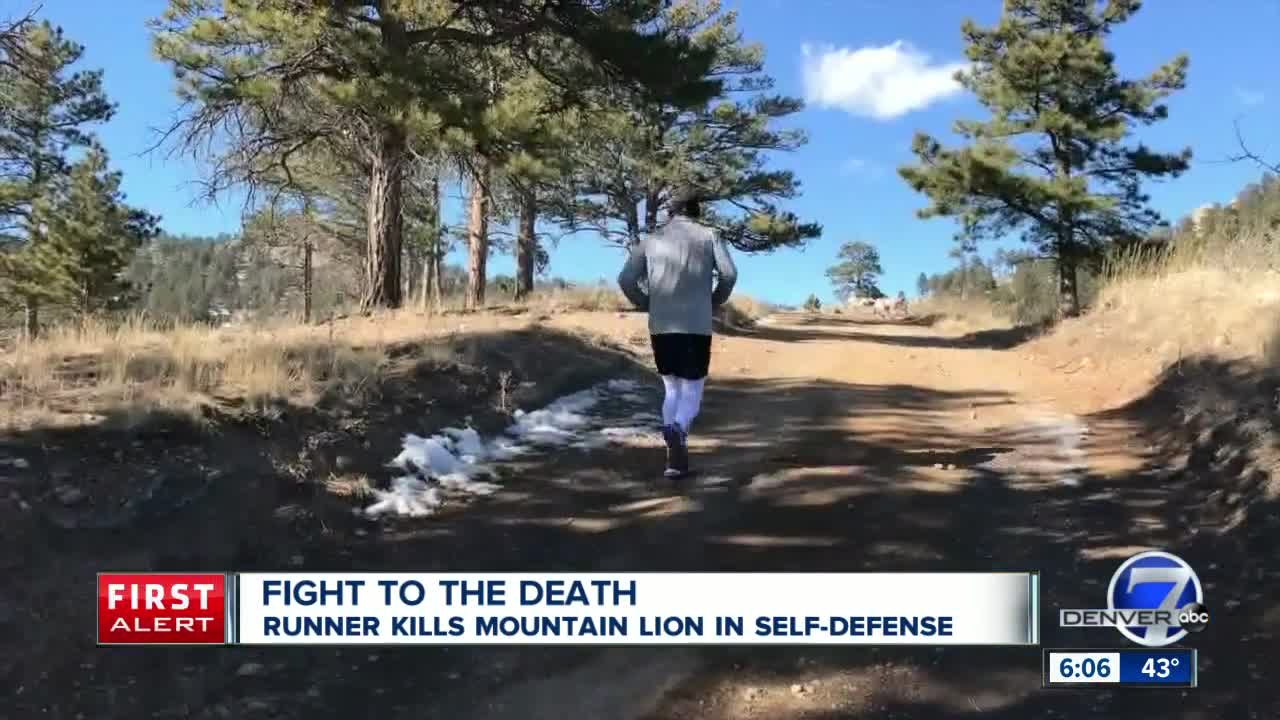 A man running on West Ridge Trail at Horsetooth Mountain Park killed an attacking mountain lion by suffocation in self-defense Monday afternoon, according to a release from Colorado Parks and Wildlife. 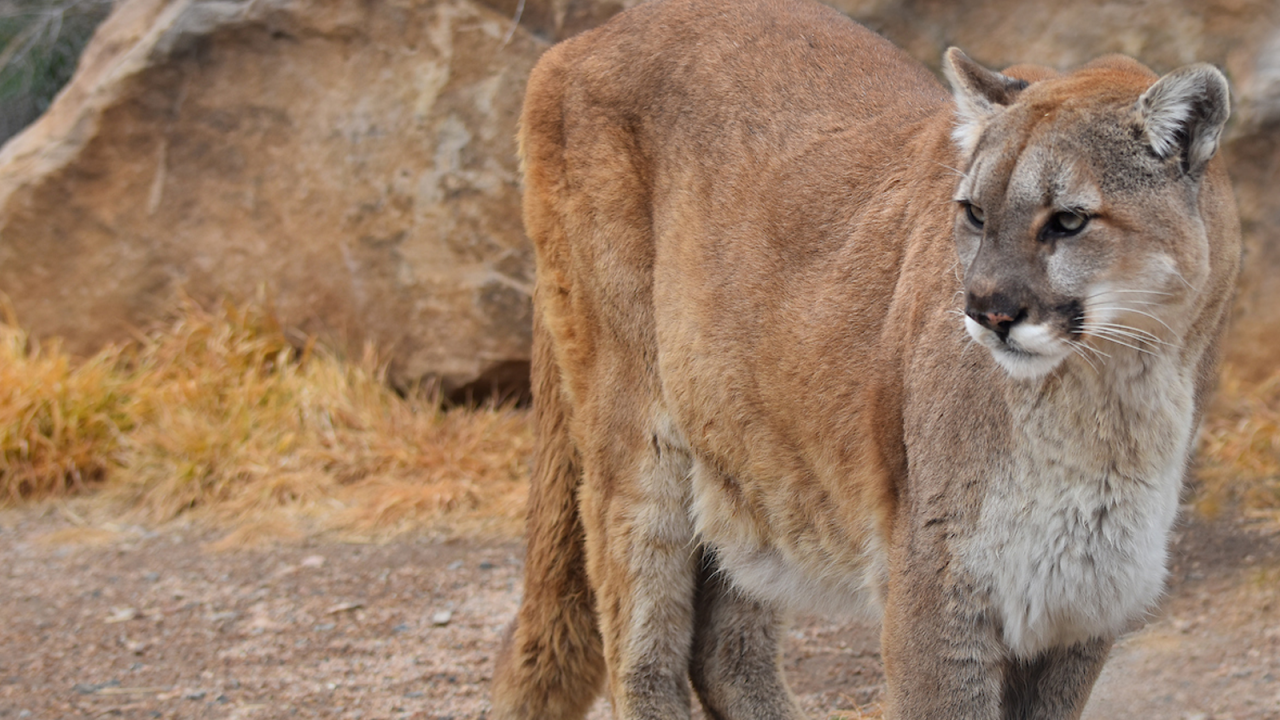 The man, who is in his 30s, said he heard something behind him while he was running on the trail and was attacked as he turned to investigate. The lion lunged at the runner, biting his face and wrist. But he was able to fight and break free from the lion, according to CPW.

After the attack, the runner, who has not been identified, was able to hike out to safety and drove himself to a hospital, CPW said. His injuries — including facial lacerations, wrist injuries, scratches and puncture wounds to his arms, legs and back — were described as serious but not life-threatening. The man was released from the hospital Tuesday morning, according to The Denver Post . He told authorities that he had researched what to do if a mountain attacked him and that he had suffocated the cat.

Wildlife officers returned to the area and found the animal's body "within feet of several possessions that the victim asked the officers to look for on the trail," according to CPW.

The lion, which was less than a year old, was taken to an animal health lab for a necropsy, where officials determined that the animal had indeed died of suffocation. They said the cat tested negative for rabies.

Rebecca Ferrel with CPW said veterinarians will look at the cat's body for more answers.

"Our veterinarians will take a look to determine if there was any kind of disease, if he was maybe starving, or if it just so happens that as young cat, he was still learning his hunting instincts and unfortunately the trail runner was kind of in the right place at the right time to trigger those instincts," she said.

John Demboski, curator of mammals at the Denver Museum of Nature and Science, echoed those thoughts.

“Mountain lions are ambush predators," he said, adding that the runner could have excited it into a pursuit.

The mountain lion attack in Larimer happened within a mile of our Horsetooth microwave receive site that we use to send video to @DenverChannel The towers - just above the West Ridge Trail - are visible center/right in this drone aerial over the South Bay area of Horsetooth Res. pic.twitter.com/Y5A2pomkwT

The agency said the attack on the runner was likely triggered by the animal's hunting instincts. Wildlife officers said mountain lions will often instinctively try to chase and attack fast-moving animals, including humans.

“The runner did everything he could to save his life," said CPW Northeast Region Manager Mark Leslie. "In the event of a lion attack, you need to do anything in your power to fight back just as this gentleman did."

On Tuesday afternoon, CPW said the "runner is doing well considering his ordeal."

Mountain lion attacks on people are rare, with fewer than 20 fatalities in North America in more than 100 years, according to CPW. Since 1990, 16 people have been injured and three people died in Colorado as a result of mountain lion attacks.

CPW provided the following tips on what to do if you encounter a mountain lion:

Ferrel added that if you have any tools on you — like trekking poles or keys — to use those against the animal.

Kelly LaPointe is a runner who often uses the trails around Horsetooth. She said she's lived in Colorado since 2002 and has only seen mountain lions on five different occasions. Most recently, she saw two juvenile mountain lions wrestling with each other on Jan. 15 near Horsetooth. She said she was near where one of the trails of Maxwell Natural Area spill onto the road when she saw the cats playing and wrestling with each other about a quarter mile away. It was between 9 and 10 a.m., she said.

"To my surprise, there were two juveniles playing like house cats, tumbling over each other," she said. "We stopped and turned around, without the cats seeing us. I did see a car stop to catch a glimpse at the cats.”

When she heard that a man had been attacked by a mountain lion in that area, she decided she would likely never run alone on the trails again, she said.

“While I realize this attack and even sightings are rare occurrences, I contribute my questionable luck seeing them to my paranoia and hyper-alert state," LaPointe said. "I’m always looking, never really able to get into the zone. I believe they are there often, do not bother us and people don’t see them because they aren’t looking.”

The attack lifted the "weight of the silliness and guilty I felt being afraid to run alone," she said. She doesn't believe the runner did anything wrong in defending himself, she said.

“We live in this beautiful state with access to amazing trails," she said. "I want everyone, including myself, to be able to enjoy this blessing. I just think that people should be smart. I think, with the huge growing interest in trail running, people have a false sense of confidence... I hope everyone can balance some healthy paranoia with a resilient love for the trails.”

CPW said it is still completing its investigation into the incident. Larimer County said it has temporarily closed the open space after staff revisited the area and saw additional mountain lions. Ken Brink Jr., visitor services manager for Larimer County Department of Natural Resources, said the safety of visitors is paramount, so they will close the park and reassess the situation on Friday.

"We'll reopen Horsetooth Mountain when we’ve had more time to assess mountain lion activity in the area with our partners at CPW," Brink said.