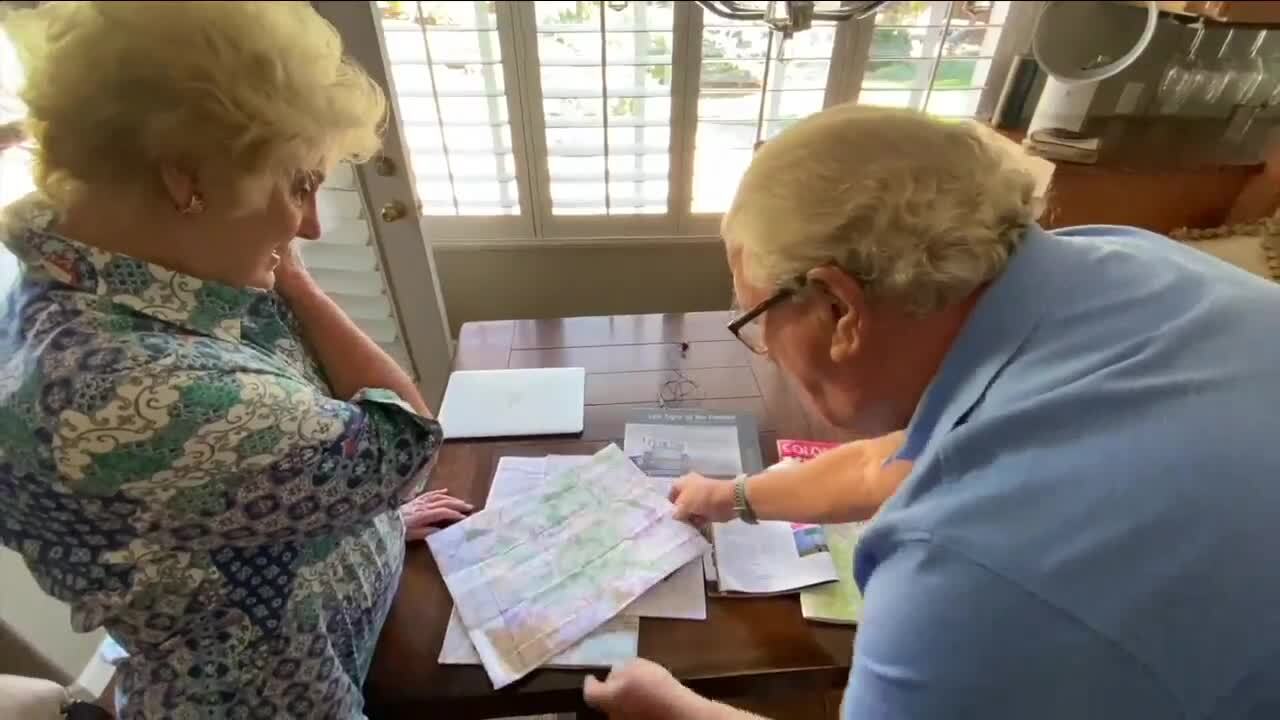 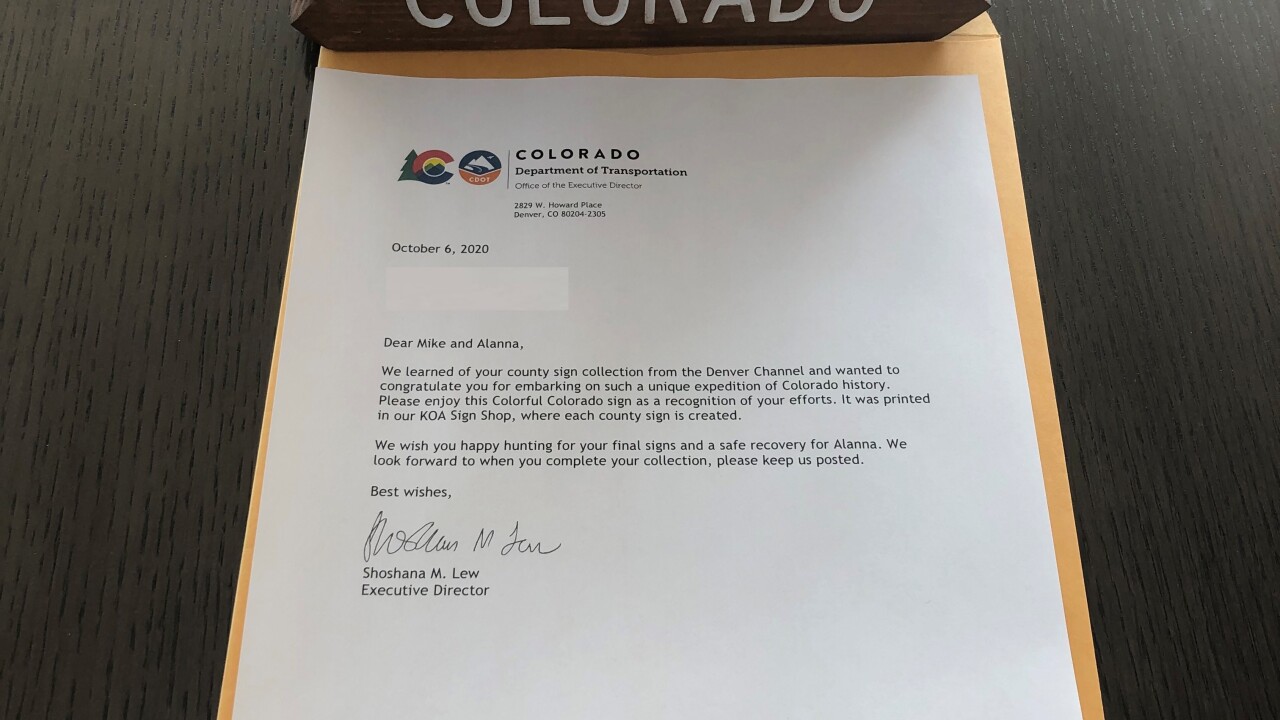 Quick, how many counties are there in Colorado? If you guessed 64 you would be right. Not too many travelers have visited every single one of Colorado’s counties but one retired couple from Lakewood is visiting every one and remembering their visit in a very unique way.

“We are used to traveling a lot, but now we’re homebound and housebound,” says Mike Marsh, adding that they are restricted from traveling overseas due to the pandemic.

Marsh and his wife Alanna Miller decided now is the time to start looking around the state.

"We always have loved to drive around the state," he said. "We are used to air travel and we decided, 'OK, we’ll just transition to road trips.'”

While road-tripping around Colorado isn’t unusual, the way Marsh and Miller are documenting their trips is.

“At some point we decided we need a picture of all these,” Marsh said.

A picture not of the scenery or city streets but of the sign that welcome travelers to a different county.

“We’ve had some interesting ones. Of course, they aren’t all uniform. Some of them are colorful, some of them have bullet holes in them," Marsh said. "I mean they’re pretty interesting."

Since the signs are right off the side of the road, you would think they are easy to get to, but some have been challenging.

“It’s all contingent on how safe it is to stop,” Marsh said. "If there’s no shoulder, it’s almost impossible to stop. If we have room and there’s not a lot of traffic, we will get out and take the picture or I’ll take a picture of her next to the sign. That’s worked well but there’s some of them, like Eagle County — we haven’t found a place where we can pull off and get an Eagle County sign. So we’re still working on that.”

Since the stay-at-home orders were relaxed, the couple has rolled over thousands of miles of rural Colorado highways along the road less traveled, sometimes logging hundreds of miles a day. Most of the signs have been easy to find but some have been a bit tougher. So that’s when they enlisted the help of the locals to point them in the right direction. But there was one sign that should have been easy for them to find, for a county that is less than a mile away from their home: Denver.

“We think we were pretty resourceful, but we had to go to the source, Jayson Luber,” Marsh said.

I directed Marsh and Miller to one of several signs at the Denver city and county limits. There is one with decent access along eastbound I-270 just before Quebec. There are others that are little harder to get to, like the two on I-25. One is along northbound I-25 at Belleview. The other is on the southbound side of I-25 just before I-70 near 48th Avenue. There are two others along westbound I-70 — one on the mainline under I-225 with the other about 100 feet higher up the hill from the ramp taking traffic from Chambers Road to westbound I-70.

“You came through, so now we have some Denver signs,” Marsh said.

The Colorado Department of Transportation is responsible for putting up these county signs. When driving past them at highway speeds, most seem just mundane but when you stop and take a closer look, each one shows a little different character. Each county can make them stand out a bit more as they have the freedom to feature a sign that is more than just white on green.

“Sometimes, counties will want their logo and they have to provide the sticker of their logo for us to install on the signs,” said Tamara Rollison, CDOT spokesperson. “So, we will install them but that is not our top priority due to more pressing needs.”

Throughout their time on the road, driving from sign to sign, Marsh and Miller found something else out there that they can’t take pictures of.

“It’s been a Colorado history that we’ve scratched the surface of. Everything leads to something else and it’s been an exciting adventure. It’s fulfilled a lot of needs besides just seeing the state,” Miller said.

During what was to be the last trip to photograph signs in southwestern Colorado, unfortunately, the couple had to cut the trip short. Just after they captured signs for Montrose, Ouray, San Juan, Archuleta, Mineral and Rio Grande Counties, Miller stumbled and fell at Black Canyon of the Gunnison. Once she is able to travel, they hope to hit the road once more to photograph the last few signs. When they're done, the couple will look for ideas on how they can show off their collection of pictures, whether on a poster or a coffee table book.

Update 10/15/2020: After reading this story, CDOT executive director Shoshana Lew said she was moved by Mike and Alanna’s “unique expedition of Colorado History”. She rewarded them with a replica of the Colorful Colorado welcome sign. Mike says they were surprised, extremely grateful and think the sign and recognition is “really cool”. The couple hit the road in mid-October to finish photographing all 64 Colorado county signs.