(Copyright 2020 The Associated Press. All rights reserved. This material may not be published, broadcast, rewritten or redistributed.)
Charlie Neibergall/AP
FILE - In this Aug. 10, 2019, file photo, then Democratic presidential candidate former Colorado Gov. John Hickenlooper speaks at the Presidential Gun Sense Forum in Des Moines, Iowa. The Colorado Ethics Commission is releasing an investigation into John Hickenlooper's use of private planes while governor. A Republican critic filed a complaint alleging Hickenlooper had improperly traveled on private flights during his administration. (AP Photo/Charlie Neibergall, File) 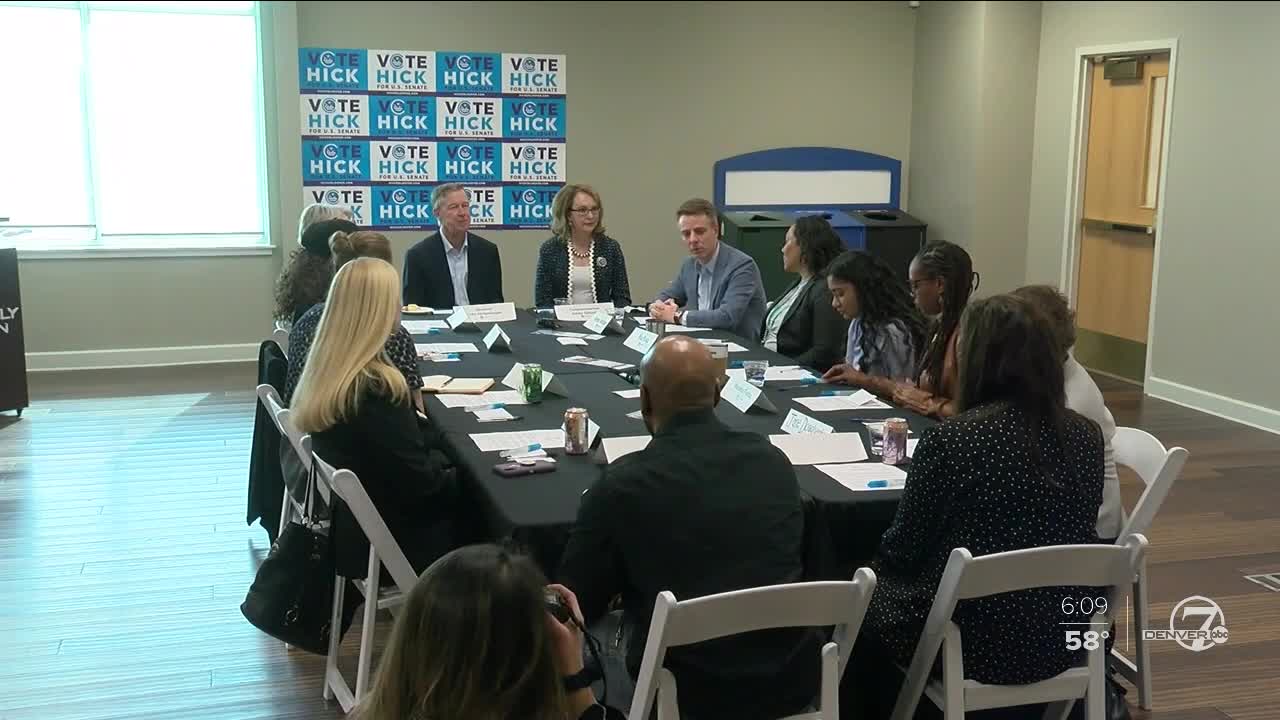 WESTMINSTER, Colo. — Former Colorado Governor John Hickenlooper earned a powerful supporter in his U.S. Senate bid Monday when Gabby Giffords came into town to announce her endorsement for him.

Before a rally in Aurora, the two hosted a roundtable discussion at the Butterfly Pavilion in Westminster to discuss gun violence, a vital issue for Hickenlooper.

Hickenlooper and Giffords were joined by the families of victims of gun violence who shared their stories of loss as well as local officials, activists and a tech company.

“Colorado is obviously a state that brings together a history of gun ownership and hunting and also a tragic history of gun violence,” said Peter Ambler, the executive director of the Giffords Foundation.

One by one, people went around the table talking about how their lives and communities have been affected by gun violence and the changes they would like to see happen.

Hickenlooper said the first thing he would do if he were elected is introduce and help pass a bill requiring universal background checks for gun purchases.

“For whatever reason, Senator McConnell and Senator Gardner don’t even want that to be discussed on the floor of the Senate despite the fact that, nationwide, 90 percent of Republicans support universal background checks,” Hickenlooper said.

Hickenlooper touted his willingness to stand up to the NRA when he was governor when the state passed its own version of universal background checks and said he’s willing to do it once again.

“The NRA supports so many of our elected officials and is so powerful in that context that we don’t get it. That’s why I want to go to Washington because Washington is so broken and unable to address these basic issues like universal background checks,” Hickenlooper said.

Despite big endorsements, Hickenlooper polled behind Andrew Romanoff in Saturday’s Democratic caucus. Still, the former governor is likely to make it onto the June primary ballot after turning in thousands of signatures in support of his candidacy in February.

One of the bills requires gun owners to report lost or stolen firearms within 48 hours of noticing that it went missing. Failing to report the missing firearm could result in a fine for the first offense and a class 3 misdemeanor for the second offense.

The second bill requires gun owners to safely store their firearms. The bill makes it a crime for owners to store guns in a way that a juvenile or someone who shouldn’t have access to the firearms to get to them.

It also requires licensed firearm dealers to provide each firearm with a locking device to the new owner to secure them.

Both bills are likely to face opposition from gun rights advocates.

Meanwhile, lawmakers on Monday passed a resolution to rename part of C-470 in honor of Kendrick Castillo, who was the only student to die in the STEM Highlands Ranch school shooting.