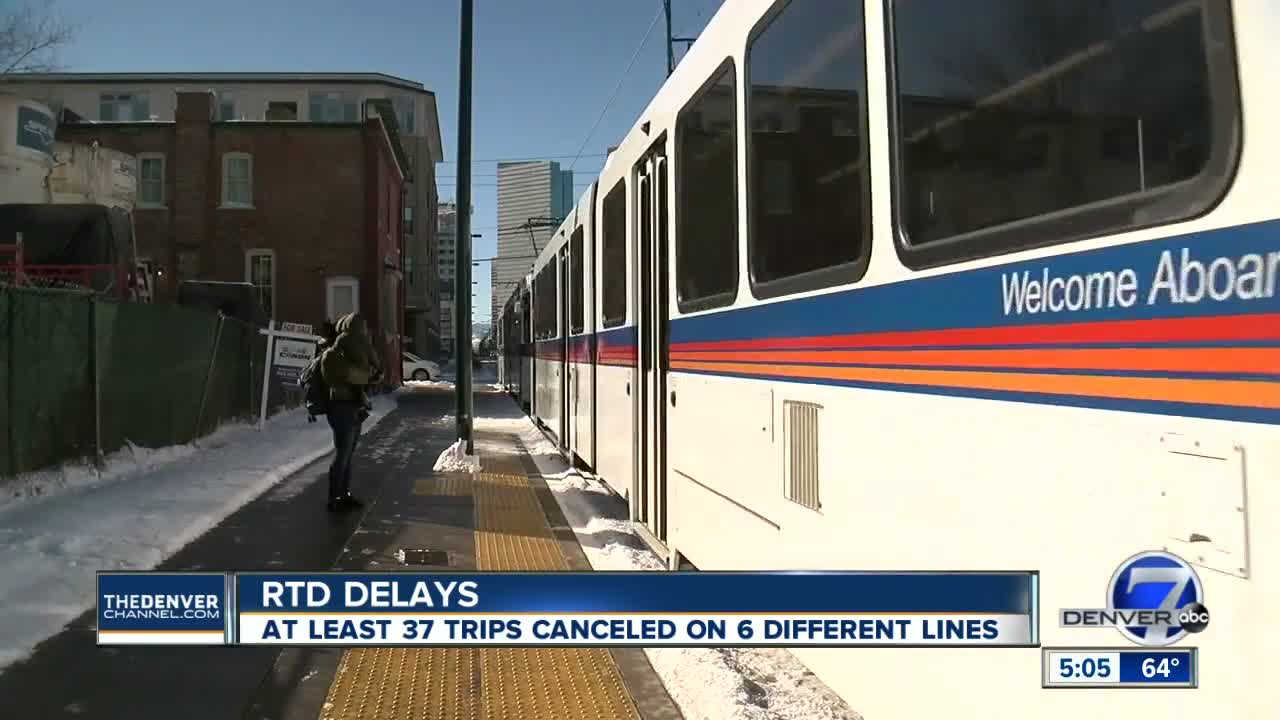 DENVER -- It was another day of frustration Friday, as RTD riders were beset with more delays and cancellations.

At least 37 train trips were canceled on six different lines before 6 a.m.

The transit agency blames it on a shortage of operators, but several people who have applied for jobs with RTD, say they haven't received any replies.

Alicia Love wrote on Denver7's Facebook page that she applied two months ago.

Since then, "I have called, left messages and emails for the hiring lady. Not one call back," she wrote.

Vanessa Jantz wrote, "I applied some time ago. Clean background, clean (motor vehicle record.) They never called. They can blame themselves."

RTD customers are not happy to hear that.

"It's upsetting and really unfair to all of us who commute every day," said bus rider Phineas Burton.

Angela Williams, the recording secretary at Amalgamated Transit Union Local 1001, said, "People put in applications and are waiting four to six weeks for a call back from RTD."

She also said those who apply at First Transit, a private contractor working with RTD, receive a call back within 24 hours.

Williams said its frustrating that RTD doesn't place a higher priority on responding to job applicants, while current employees are being forced to work six days a week.

"This is a tough situation," said Pauletta Tonilas, RTD Assistant General Manager of Communication. "We don't like being in this situation."

Tonilas said there are reasons it can take a while to vet a job candidate.

"Staff size is one," she said. "Department of Transportation rules are another."

Tonilas called it a complex process.

"There are rules that we have to follow, and some people do not meet those rules and regulations," she said.

Hope on the horizon

The Assistant GM said hope is on the horizon.

She said they've streamlined the application process and have a new class of 50 trainees that will begin orientation on Monday.

"Without question, if people are having (to wait) a month or two, (for a return call,") I don't think that's acceptable, but again we have shored up our process. We work very hard to get in touch with people right away as much as possible," she said.

Tonilas said the training will take about 11 weeks.

She said one of the challenges of training train operators is getting time on the tracks.

She said there is only a two-hour window each day when the tracks are clear.

The Assistant GM said they hope a majority of the trainees make it through the process and get hired.

Riders hope so, too.

"As it gets colder out and starts snowing, that's going to be a terrible wait time outside, especially since most bus stops aren't covered around here," Burton said. "It's going to be bad."