'It's about Kendrick': STEM students say they walked out of event in order to hold their own vigil 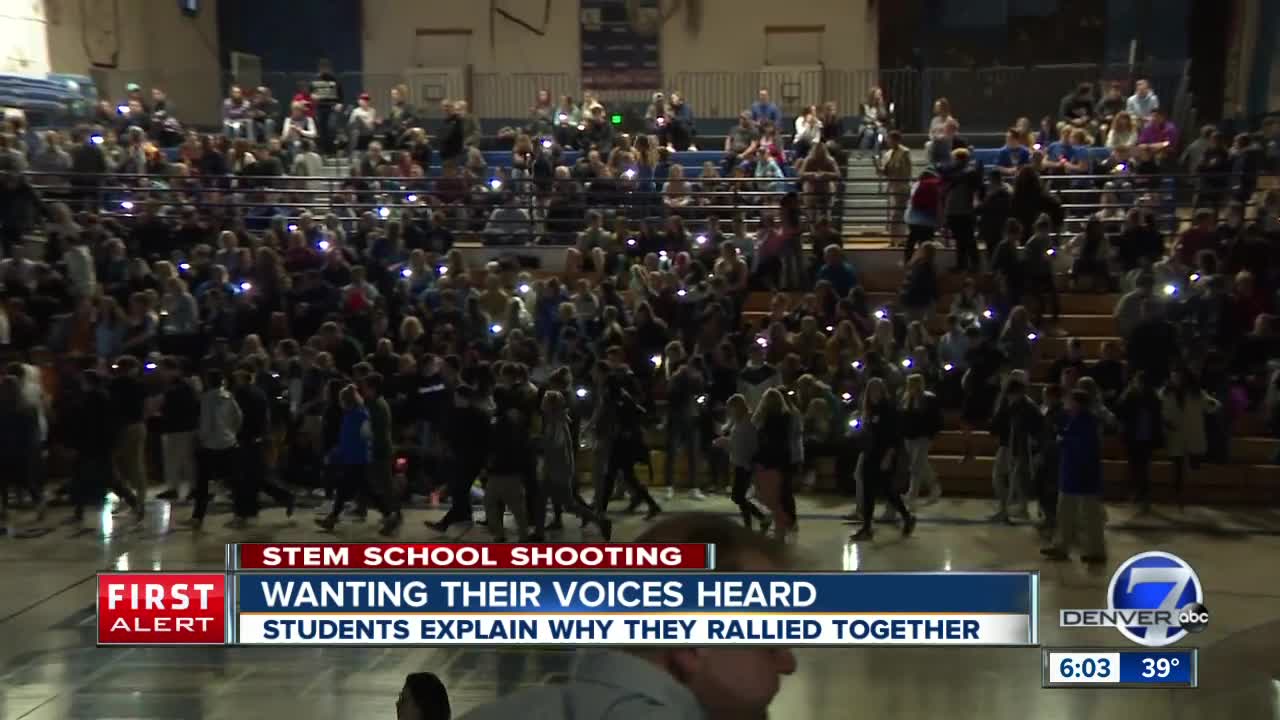 DENVER – Several students from STEM School Highlands Ranch said Thursday that they walked out of the planned vigil Wednesday night at Highlands Ranch High School and held their own vigil outside because some of the speakers were not acknowledging the victims of the shooting and were using the gathering instead as a rally for political purposes.

“What it seemed like to me … is that it was less about Kendrick [Castillo] and STEM and survivors, and it was more about peddling a narrative and peddling policy,” said STEM School student Rob Laurie, who was one of four students who attended Wednesday’s vigil to speak with Denver7 Thursday.

The event was organized by Team Enough, which is the student-led subset of the Brady Campaign to Prevent Gun Violence. Among the several speakers were Sen. Michael Bennet, D-Colo., and Rep. Jason Crow, D-Colo.

At one point early on in the event, someone in the audience yelled, “Let STEM kids speak!” And about a half-hour into the event, a woman who was not scheduled to speak and who has not been identified by Denver7 claimed “the media is stopping STEM kids from speaking.”

That was not the case, according to the students with whom Denver7 spoke.

“The media was not the reason that STEM walked out of that rally,” Laurie said.

He said the event was advertised as a candlelight vigil to honor Castillo and the eight other students who were shot and injured but survived. But he said he didn’t believe that Castillo’s name was mentioned among the first couple of speakers, which he and other students said was when they came up with a different plan.

“I was there for Kendrick and the survivors and my friends, and to see that put to the wayside to focus on a political agenda was disheartening and not what we were going for,” said another STEM student, Joanne Fuchs. “And I think that’s when a lot of people started getting angry with it. We said this isn’t for us, and we went downstairs and had our moment there. We gave hugs and said, ‘It’s about Kendrick.’ And that’s when we decided to walk out.”

Fuchs and Laurie, in addition to two other students who did not wish to be named publicly, told Denver7 that they felt the unplanned and student-organized vigil brought them together more than the planned event.

“We weren’t there for that purpose. It wasn’t the time. We didn’t view it as appropriate and we made a collective decision,” Fuchs said. “I know a lot of us felt it was a success. We got what we wanted. We got to honor Kendrick in the way we wanted.”

“Had [the planned vigil] been advertised as what it was, I would’ve gone to a different vigil,” Laurie said. But he added that the spontaneous vigil was exactly what he hoped for.

“I found I was proud of my community and that was the most healing experience I could’ve gotten since the shooting,” he added.

Some involved in the planned event, who spoke on the condition of anonymity, said they felt it was poorly organized.

“The event at Highlands Ranch High School was planned to be responsive to the broader community, who have been deeply impacted by this event, and to show solidarity with the STEM School students, teachers and parents. We are here to lift up the voices of victims and survivors. Members of the community, faith leaders, students, teachers, youth activists, and elected officials – including Sen. Michael Bennett [sic] and Rep. Jason Crow – were invited to join this vigil honoring the STEM School community,” Samis said, in part.

“We are deeply sorry any part of this vigil did not provide the support, caring and sense of community we sought to foster and facilitate and which we know is so crucial to communities who suffer the trauma of gun violence,” Samis added.

Crow, who represents Highlands Ranch, said in a statement he showed up to the event for his community and to listen to students.

“It is my job to show up and support my community during times of tragedy. I grieve for what Highlands Ranch and our families have been through. The last few days I have been asked the same question over and over again: what are you doing to stop this from happening,” Crow said in a statement to Denver7. “It is my job to take tough questions and offer real solutions. Bottomline, everyone needs to listen to those most impacted by this violence to learn how we can move forward, and that begins with listening to the students of STEM School.”

Courtney Gidner, Bennet’s communication director in his Senate office, echoed the concerns of the students.

There are several resources available to help Castillo’s family and other victims, and there are other events planned to honor the victims of the STEM shooting.

As far as the students who attended Wednesday’s event, they said the spontaneous vigil eventually accomplished what they thought they were setting out for earlier in the evening.

“A lot of STEM students were looking for comfort and connection, and a lot didn’t get what we wanted. So we tried our best to make it what we wanted,” Fuchs said. “I’ve never seen that much STEM spirit from us ever. … It brought our community together to connect with our experience.”