'It is impacting our health': Broomfield residents complain about weird smell near oil and gas site 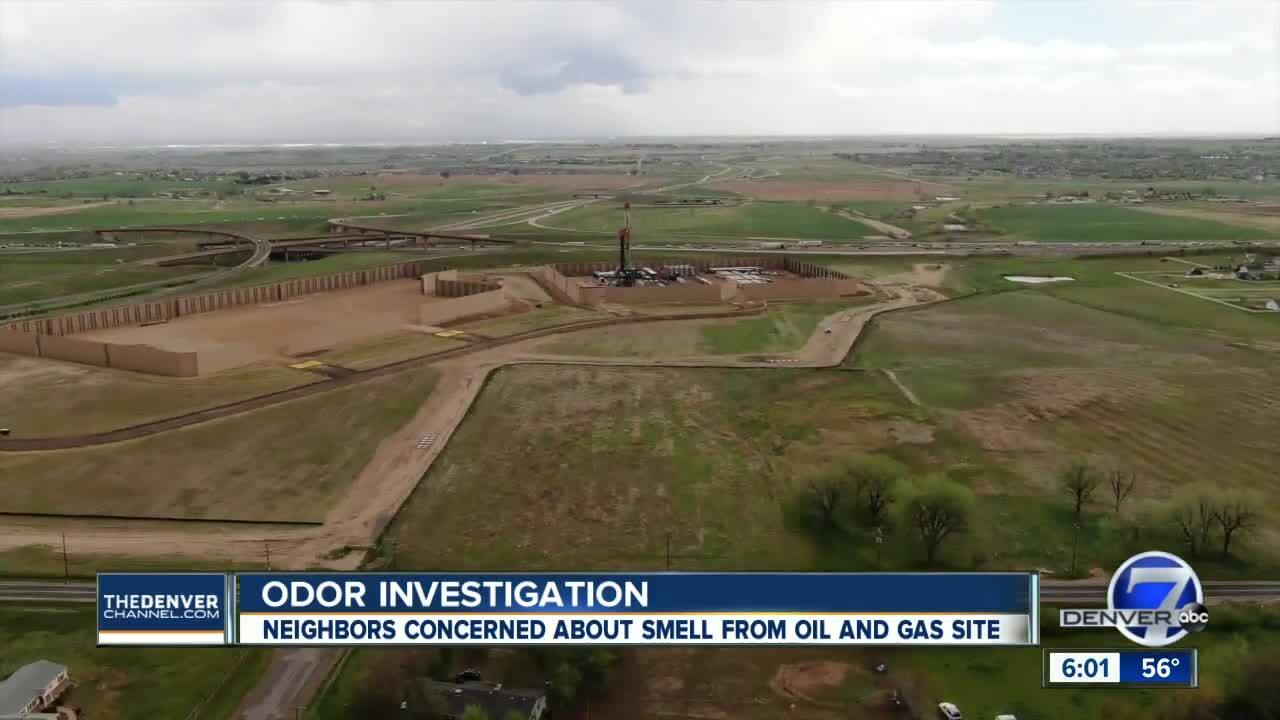 Some broomfield residents are concerned with they say is a weird odor coming from near an oil and gas site. 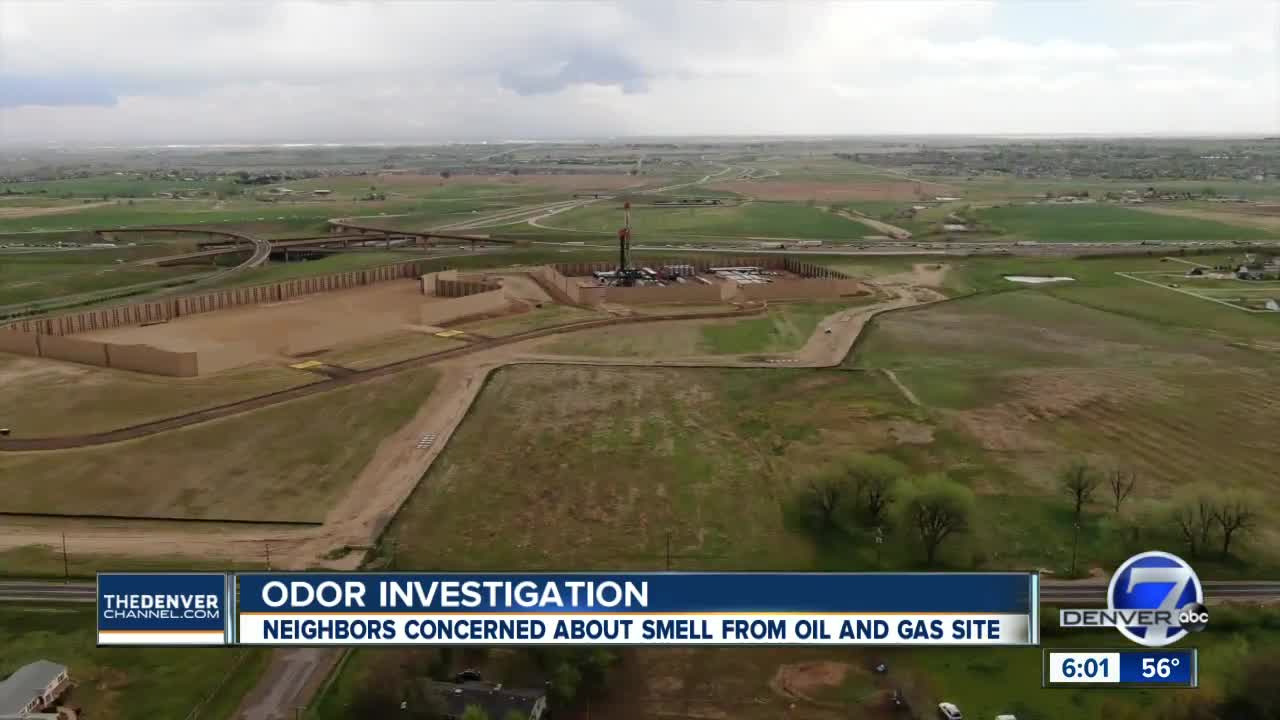 BROOMFIELD, Colo. – Residents of a Broomfield neighborhood behind the Orchard Town Center said they have started to notice a strong smell coming from some nearby oil and gas operations.

In 2017, two oil and gas drilling operations were approved in the area. Neighbors said the smell is coming from the Interchange B drilling pad near the intersection of Interstate 25 and Northwest Parkway.

“They started drilling sometime in April, and shortly thereafter, neighbors – not everyone but some of us – started to notice a very heavy noxious odor of oil,” said Barbara Binder, who has lived in the area for more than 20 years.

Binder said the odor comes and goes, depending on the direction of the wind, temperature and day.

“It is impacting our health; many of us are lung compromised, I have asthma, many of my neighbors have asthma,” Binder said.

Some neighbors Denver7 spoke with smell the odor continually. Some said it’s difficult for them to breathe. One said she has gotten an nose bleed and a rash that she blames on the smell. Others said they do not smell it at all and do not have a problem with it.

“I’m more worried about cancer and other things that are long-term,” neighbor Kathy Swan-Bogard said. “It’s a variety of odors. Sometimes it’s acetone.”

Since April 20, complaints have been filed with the Colorado Oil and Gas Conservation Commission about the Interchange B pad, however not all of them deal with the smell.

Several neighbors have also filed complaints with the City and County of Broomfield.

On April 8, neighbor Nicole Hyne wrote a complaint saying she has been feeling nauseous from an overwhelming diesel fuel odor that has been present for about three days.

The next day, the city sent back a lengthy response saying it sent people out to the side and that no odor was detected. The response went on to say that the company is in compliance with its permit and odor mitigation requirements. It also said that air emissions have been within ranges that are considered acceptable for public safety.

“While these measures significantly reduce odors, they will not completely eliminate them," a part of the reply from Broomfield says. "Drilling operations are not 'odor free' as the operator is using drilling mud that contains hydrocarbons and there are drill cuttings that are managed onsite before being transported for disposal at an approved offsite location."

The response went on to lay out several things the site is currently doing to try to reduce odors and said inspectors have been monitoring the site. Still, Hyne and others say they’re nervous about what’s in the air around the site.

“I think the biggest concern that we’re hearing is people don’t know what they are breathing,” Broomfield City Councilmember Kevin Kreeger said.

Kreeger, who voted against the creation of the pad, said he’s convinced that there are toxins coming off of the pad and that he has heard from people who are experiencing respiratory problems.

“We don’t know exactly how dangerous it is,” he said.

Broomfield does have an air monitoring program that keeps track of these facilities. The operator of the pad, Extraction Oil and Gas Inc., also has an agreement with Broomfield to deal with the odors.

“The contract does say that they have to limit order as much as possible and they have to resolve resident complaints about odor to the extent possible. They have to use additives that don’t mask the odor but that reduce it,” Kreeger said.

Unlike other cities, Broomfield does not allow companies to try to cover over the smell of oil and gas operations with another odor. Kreeger said that is a safety precaution.

“You don’t want to mask it because sometimes odor tells you that somethings wrong. The odor is sometimes one of the first things that alerts us to a dangerous situation,” he said.

According to COGCC documents, an inspector visited the area Tuesday night to investigate recent complaints about the smell.

“I arrived at (sic) complainant’s neighborhood and smelled a strong odor. I did follow the odor back to the Interchange B drilling pad,” part of a report filed by the inspector reads.

The inspector said he spoke with the rig manager and found out that the drilling fluid’s temperature was a little higher than usual.

“It validates the fact that we are not crazy, we are not making this up to be a pain in someone’s rear, we are experiencing a significant impact to our quality-of-life that is also impacting our health,” Binder said.

The operator was ordered to provide the COGCC with details about the drilling processes and procedures currently underway at the site and to provide documentation on the steps that will be taken to mitigate the odors.

The inspector said another site visit needs to be conducted in the future to make sure the pad is complying with the orders.

“The question is right now are they doing as much as possible and I don’t think we know,” Kreeger said.

On Wednesday, Extraction Oil and Gas Inc. submitted paperwork saying it uses a single mud cooler/chiller to reduce odors. It is also using a odor neutralizer called Ecosorb at the site.

“Going forward we plan on adding a second mud chiller starting first thing tomorrow, 5/16 to further reduce the temperature on (sic) surface and eliminate additional odors. We also plan on using and (sic) additional odor neutralizer called Odor-Armor from Benzaco Scientific. It acts in a similar manner as Ecosorb and other operators have had success with it in the area,” the Extraction Oil and Gas Inc. response to the COGCC read.

However, Kreeger said he believes the smell will start to get worse soon because that’s when the hydraulic fracturing operations will begin.

“The next phase, unfortunately, would generally be considered far worse,” he said. “That’s the biggest release of toxicity during the project.”

For neighbors like Binder and Swan-Bogard, they said the bottom line is they don’t believe these sites should be so close to neighborhoods.

"They need to get their odors under control, and they need to be transparent with their health issues associated with their industry,” Swan-Bogard said.