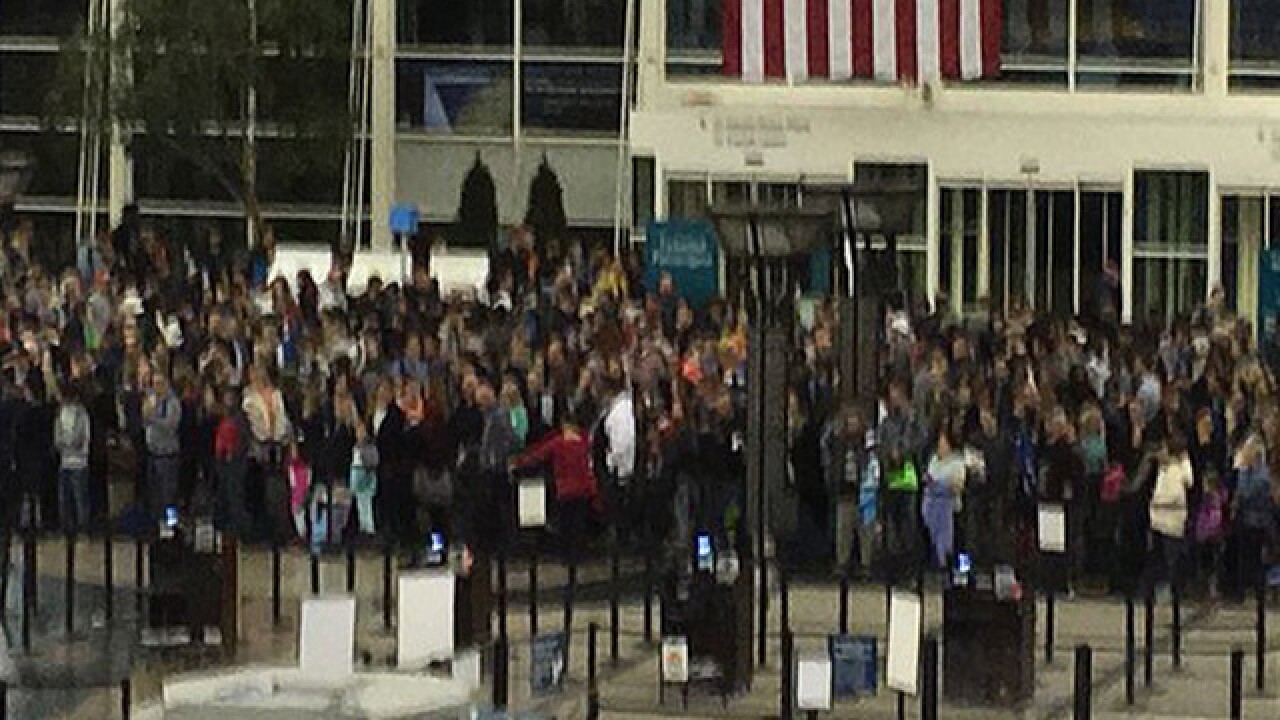 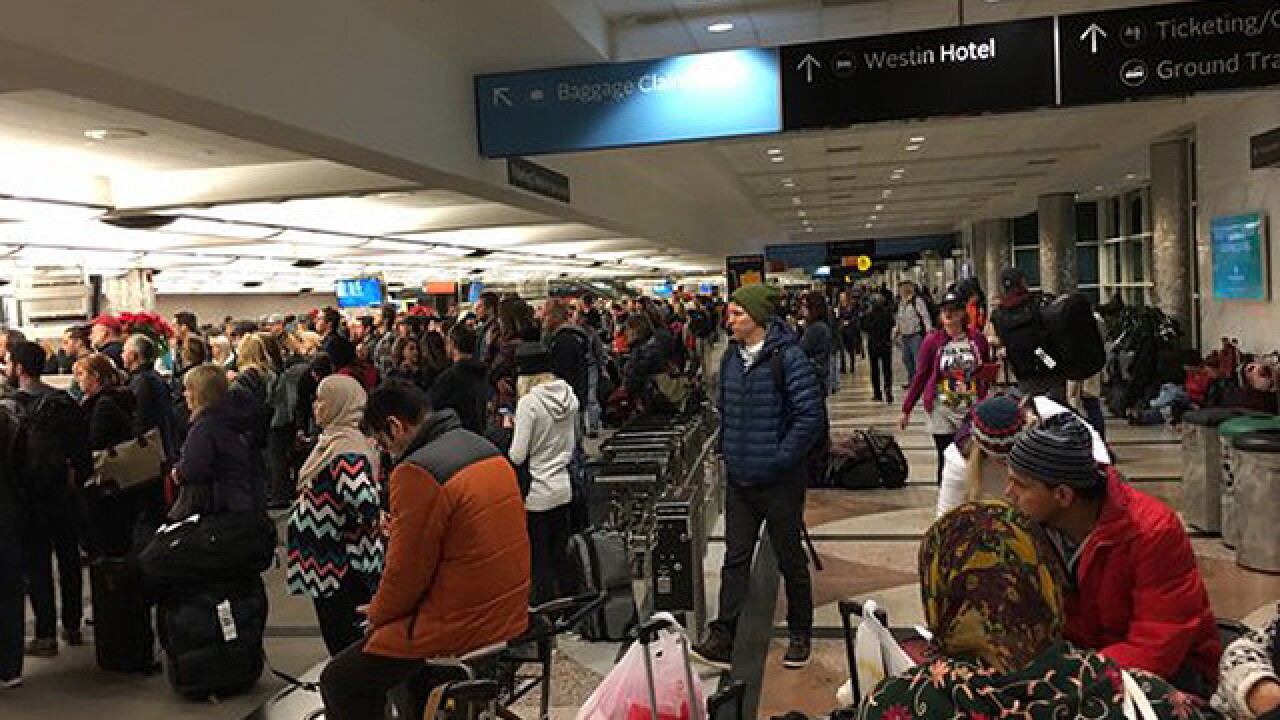 Denver International Airport says security wait times have decreased to 25 minutes on Tuesday afternoon, down from a few hours earlier in the day.

Airport spokesmen apologized to frustrated travelers because of the massive wait times overnight and through early morning caused passengers to miss their flights. DIA tweeted that heavy security wait times were due to holiday traffic and blamed TSA for poor staffing levels at the security checkpoints.

@tsa can you please provide some information regarding lines tonight to our customers who are asking?

The airport’s website showed a 90-minute wait just after midnight. However, some travelers told Denver7 that they had waited up to four hours to get through the security screening area and because of that, they missed their flights.

"The plane was taken, was just taken to solve another problem. You could tell," said traveler Cork Snyder, whose flight was delayed.

TSA spoke with Denver7 early Tuesday and denied reports that wait times were three to four hours. A TSA spokesman said the security line wait was, on average, about to 2 hours max and blamed bad weather across the country for the delays.

"There is a single security checkpoint for the entire Denver airport right now. I just waited in line for about two hours, and my flight was (missed) because they didn't want to hold it for us. There are a number of people in line who waited just as long, and lost their flights," said Snyder.

TSA spokesman Mark Howell said TSA staffs are based on projected number of passengers but when weather-delayed flights get pushed into the overnight hours, or if several later flights are added to compensate for the holiday demand, it can cause backup problems, as it did in Denver.

"We came the 2 hours earlier like they suggested. We actually got here a little bit earlier than that. At that point the line for TSA wrapped all around the building and three lines of those corrals that they had to get through. So pretty much everybody that's been in here has been in line for almost 2 hours waiting just to get through," Lydia Hibl, the mother of stuck passenger, told Denver7. "Her flight is supposed to leave at 1:45. We have been here since 11:45 in line and she has not even halfway through the line yet because TSA only has one line where they're letting people through."

The TSA admitted it did not anticipate the volume of travelers that had passed through overnight and was not aware of the added flights. Howell admitted the agency did not staff appropriately.

When asked why the TSA didn't pull in extra crews when they discovered the issue, Howell said if given enough lead time they would have increased staff, but it is hard to do on the overnight shift and still staff accordingly for peak travel times during the day.

In addition to higher than normal holiday passenger volume, wait times at the airport can fluctuate based upon the volume of passengers arriving for flights, especially when there is a large number of delays and cancellations.

With finite resources, TSA at each airport must be able to plan its staffing and requires lead time to be able to avoid staffing problems. In this case, that lead time was not available.

Travelers should contact their air carrier prior to proceeding to the airport, and schedule plenty of time to account for road conditions, parking and airport congestion.

As for DIA, the airport said there was little it could do about the delays.

"While TSA is responsible for staffing and managing lines we understand traveler frustration at the lines tonight. Please allow extra time," DIA tweeted around 12:30 a.m. Tuesday.

In a statement Tuesday afternoon, DIA spokesman Heath Montgomery told Denver7 it's working with the TSA to assist passengers:

Late Monday night and into early Tuesday morning, passengers at Denver International Airport experienced extended wait times at the TSA checkpoints of up to three hours. While the TSA is responsible for the operation of the security checkpoints, the airport understands the frustration and anxiety that a lengthy delay can cause passengers, and we apologize to travelers for the inconvenience. DIA has no authority over TSA checkpoints but the airport does provide additional staff to help manage the queues leading up to the checkpoints, and will remain in close contact with our partners at TSA to assist passengers in any way possible. The airport continues to project above-average passenger traffic for at least the next two weeks, so passengers should arrive at the airport between two and three hours prior to boarding times.

On the other end of the airport, people waited more than an hour to receive bags. Photos show massive crowds near the baggage claim. For some passengers, they left baggage claim empty-handed.

"No bags, our bags are in Chicago. Were flying to Kansas. Hopefully they send the bags from Chicago to Kansas, so that we will have clothes for the next couple of days until we go back to Chicago,"said Kyrsten Frances.

DIA said Sunday was the seventh busiest day ever with 175,000 passengers. This upcoming Sunday is expected to be the second busiest ever with almost 179,000 travelers.

From Dec. 29 through Jan. 4, 1.1 million passengers are expected to travel from DIA.

@TheJoyMeadow we are so sorry! TSA is responsible for checkpoint operations but we hear you and will address it with them

@DENAirport hundreds of people are waiting for ONE TSA LINE. And most of them already missed their flights because of your "staffing".

@DENAirport poor tsa. lovely walls and ceilings to stare at in the meantime. no one thought people would fly this week? unfortunate strategy

@DENAirport @TSA @Delta massive lines. Flights should be delayed. No excuse for this?!? pic.twitter.com/OHGtrtZ1Ee

@DENAirport @TSA collaboration at DEN security is awful. It's 2016, be prepared. #NoOtherWords

I can almost make out security in the distance. one x-ray line, @DENAirport. the line is past baggage claim and snaking there.

@aaronontiveroz @DENAirport Yesterday, too. Bridge closed, line completely around terminal. On Sunday after holiday? You have one job, @TSA.

@DENAirport cutting the only security line at DIA to one tsa person? Every 1 in the line will talk to this guy pic.twitter.com/Tf87aIxuQk

@DENAirport good know and will do. But nevertheless, the rude staff (never happens at DIA) and no additional check points open...shocking.