The dream of PRT was alive in Denver in the 1970s 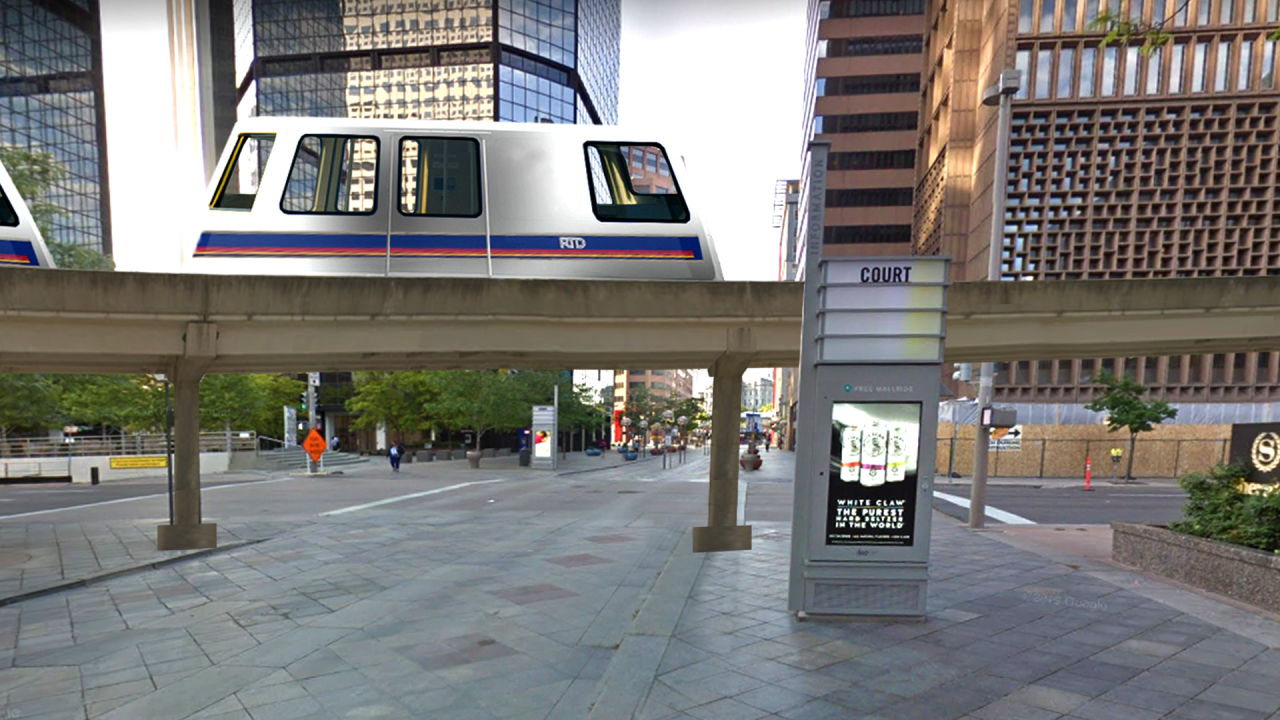 DENVER — After climbing a few stairs, you arrive at a transit stop above East Colfax Avenue in Denver. You wait only a few minutes when you see a pod-type vehicle make its way down an elevated guideway and stop in front of you.

The doors open and you get in. Looking around, you notice you have the pod to yourself. The doors close and you enter your destination, the 16th Street Mall. Soon you're zipped away above the congested streets and arrive at the mall without the pod having to stop along the route.

This scenario of an automated people mover came close to becoming a reality for Denver commuters as the dream of personal rapid transit (PRT) was alive and well in the 1970s.

A PRT system was designed to eliminate the inefficiencies of standard public transportation, like having to switch buses or trains to get to your destination. With PRT, a small group of commuters could be whisked away in automated vehicles and taken to their destination without having to stop to pick up other people.

The idea looked on paper, but it never really took off due to technological and financial hurdles. The only system still in operation in the US is in Morgantown, West Virginia, which has been transporting West Virginia University students between campuses since 1975.

But in the early 70s, the Regional Transportation District had high hopes the computer-driven system would work in Denver, with its board of directors approving a more than $1 billion, 100-mile transportation plan that included PRT, according to a Denver Library Digital Collections article.

In 1972, the technology was in the testing phase. A guideway was constructed at Stapleton International Airport where the pod-like vehicles, designed by Transportation Technology Inc. of Denver, were tested. A test track was planned for Broomfield, but it never came to fruition.

That same year, a US Department of Transportation project gave the city the green light – along with an $11 million grant — to develop a PRT system. Denver was among 30 other cities selected for the project during the start of the PRT craze of the 70s.

Plans for a demonstration route for the proposed PRT system showed that the vehicles would ride atop a 16-foot elevated guideway above East Colfax Avenue from Colorado Boulevard to downtown, and then onto where Empower Field at Mile High is at now. The route had several stops along the way, including 16th Street downtown -- where a "proposed mall" was to be built, the 1972 map read.

The prototype pods being constructed by Transportation Technology Inc. had no wheels, "they float on a cushion of air created by small fans in the base of the car, and are propelled by linear induction motors," according to a Rocky Mountain News photo caption.

But not everyone was onboard with RTD's PRT project. In an article that appeared in the July 1970 edition of the West Side Recorder newspaper, opposition to the "air cushion linear induction vehicle route" was front-page news.

"At its June 17 meeting the Board of the West Side Coalition voted to oppose a route proposed along Colfax Avenue for an air cushion linear induction vehicle which is being planned by the Regional Transportation District," the article read.

The Denver newspaper reported that the group's main gripe was the proposed line would not benefit Denver residents living on the city's west side.

In the same edition, the newspaper penned an editorial criticizing RTD for being more concerned with "making it easy for suburban bankers and lawyers to reach their skyscraper jobs," because of the proposed line's focus on the downtown area.

By 1973, RTD was seeing an increase in the number of people opposed to the idea of an automated people mover. Residents expressed concern the project would result in the relocation of businesses and homes. Two years later, RTD saw the writing on the wall and pulled the plug on the project.

The plan may have been scrapped, but the transportation district didn't give up on tracked transit systems all together with the opening of the D line in 1994, RTD's first light rail line.

Photos and some of the information used in this article are courtesy of the Denver Library's Digital Collection.