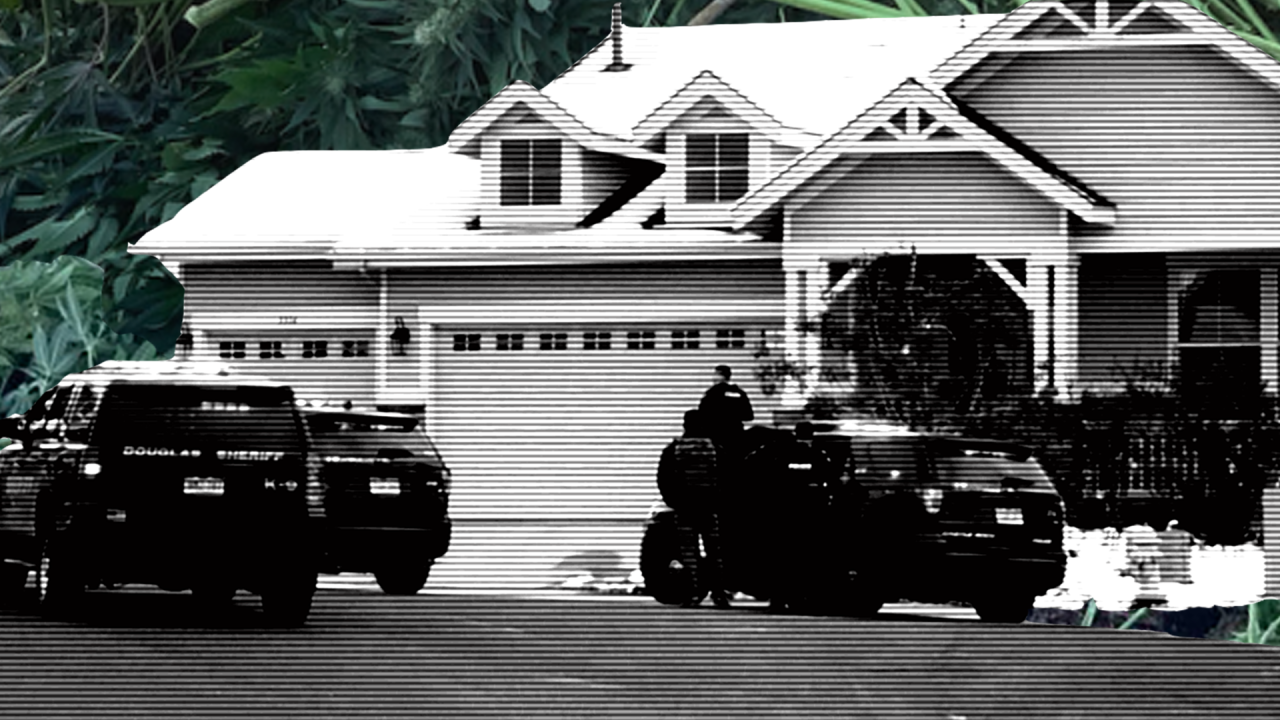 LOVELAND, Colo. – The home on Donath Avenue in Loveland sold for just shy of $400,000 in 2017, and it was easy to see why: Four bedrooms, three bathrooms, a spacious basement, a two-car garage.

On Zillow, the listing touted an open floor plan with hardwood floors, a built-in surround sound system and a view of Longs Peak from the living room. And while the home was tucked away in a tidy suburban subdivision, it was a mere walking distance from Boyd Lake State Park.

A little more than two years later, no one is likely to live at 3507 Donath Avenue again.

The home, authorities said, was a marijuana grow house, so infested by black mold that it was deemed uninhabitable.

Five other homes across Larimer County, all valued between $300,000 and $460,000, according to county property records, were raided on the morning of Nov. 20 and found in similar condition – nondescript on the outside, ruined by a large marijuana grow on the inside.

In a span of two hours, the Northern Colorado Drug Task Force, with officers outfitted in hazmat suits, seized 1,000 pounds of marijuana from 2,000 plants in the six homes. They also found another 156 pounds of marijuana, processed, packaged and ready to be shipped out of state. The raid was the culmination of a three-month investigation, which began with a tip from a neighbor.

Marijuana grow houses are nothing new in Colorado. What made the Larimer County bust unique were the suspects behind the operation. While Mexican cartels hold the most well-known stake in the American drug market, a relatively new player in black market marijuana in Colorado is a loosely affiliated, extremely insulated network of traffickers with ties to China.

The Chinese groups have gained a footing across the state – from the Western Slope to the Larimer County suburbs to the Denver metro. Their rise in recent years has rivaled Cuban traffickers from South Florida, who have long specialized in marijuana grow houses, said Wendi Roewer, the field intelligence manager for the Drug Enforcement Agency's Denver office.

Roewer estimated that the Chinese groups have established thousands of marijuana grow houses in Colorado.

The structure of the organizations remains fuzzy, but investigators know the groups in Colorado are tied to cell leaders in Northern California and New York, Roewer said. Most of the higher-level leaders are based in the United States, according to Roewer, though they’ve found a flow of money between the groups in the U.S. and China.

In the Larimer County cases, six arrest warrants have been issued but officials are not releasing names of the suspects until they have been taken into custody.

Larimer County Sheriff Capt. Joe Shellhammer, the commander of the Northern Colorado task force, said bank records traced some of the groups overseas. Money from marijuana sales would be sent to offshore bank accounts, and then wired to China. The money would then be sent from China to the U.S. – essentially coming back “clean” – and used to purchase homes where marijuana would be grown, Shellhammer said.

Many of the operations are located in new subdivisions in the Denver suburbs, in homes that cost hundreds of thousands of dollars. Many include renovated basements, where the plants are grown, and are equipped with high-tech air filtration systems to mask the smell. And many are staffed by Chinese immigrants, who speak little or no English, know each other through family or friends in their home country and claim they believed they were brought to the United States to work on a legal business.

"They're bringing in people like worker bees, that don't know a lot about the rest of the hierarchy, that are from out of state and out of country," Shellhammer said. "They're given a place to live. But their whole job is to tend to these grows and work at the houses."

If the November raids in Larimer County raked in a large amount of marijuana, a raid earlier this year in the Denver area was massive.

Operation Syndicate Green netted 42 arrests in raids on dozens of homes and businesses. More than 4,500 pounds of processed marijuana and 80,000 plants were seized in the two-year investigation.

An arrest warrant affidavit, written by North Metro Task Force detective Ben Russell, detailed the investigation and gave a glimpse of how the traffickers operate.

When two outdoor marijuana grows were discovered in Adams County, agents began looking into a group known as the Asian Pride trafficking organization. The investigators learned that a network of Chinese grows in hundreds of homes were providing marijuana to the Asian Pride members, the affidavit said. The network also operated two supply stores, on Cherry Creek Drive South in Denver and on Cherokee Street in Northglenn.

The hub of the grow houses was located Aurora, along the E-470 toll road. In the Tollgate Crossing neighborhood, where the mid-2000s homes are priced around $400,000 and up, investigators discovered eight grow houses. Sixteen more homes were searched across Aurora, sixteen more marijuana grows were discovered.

The amount of marijuana plants varied from home to home, but the setup of each grow house was generally the same.

In a home on East Kent Drive, the 1,600-square-foot basement was sectioned into smaller rooms, each one for a different stage of marijuana growth. Charts listing a grow schedule hung on the plywood wall of each makeshift room. The basement windows were sealed. An air-filtration system and tubing ventilated the room.

The grow houses also contained dozens of lights, helping artificially grow plants in the dark of a basement. A large part of Russell’s affidavit detailed the electricity usage at the homes, showing how the kilowatt usage was 10 times as much as a normal home. The electric bills at a large indoor marijuana grow, the affidavit said, could be as high as $2,000 per month.

And yet some of the operations found ways to avoid those high costs, bypassing the home’s electrical meter and tapping directly into the electrical line. If power was diverted to the home before it passed through the meter, the utility company would not be able to detect a high usage of electricity.

These methods, though, were no different than what investigators have seen for years in marijuana grow houses. The Chinese groups have only become more sophisticated in recent years, Roewer said.

Where some grow houses would have multiple industrial-sized air-conditioning units outside – making their air filtration efforts obvious – they moved to more discreet methods: Ventilation tubing and charcoal filters, odor-absorbing substances along doors and windows and fragrances designed to overpower the smell.

In some houses, Roewer said, the smell of marijuana is hard to detect at all, despite a few hundred plants in the basement.

The traffickers might take extreme measures and pay stiff costs to hide in plain sight. But if it works, it’s worth it. Roewer said the DEA estimates that one grow house could produce between $3.6 million and $5.4 million per year, for every 100 plants on a 90-day growing cycle.

The money also allows the traffickers to be flexible. If authorities bust up one grow home, another will pop up soon.

“It’s almost like ‘Whack-A-Mole’ with these grow houses,” Roewer said. “The organizations that are financing and coordinating them, they'll have new ones up with the same equipment and new residences just weeks later.”

From grow house to stash house

Beyond the grow houses, there is still much unknown about the Chinese groups who traffic the drugs.

The affidavit in the Aurora cases gave a glimpse of how the drugs are distributed.

Investigators had located a home in Denver where the groups stashed marijuana after it had been cultivated, the affidavit said. The home was on South Bryant Street on the southwest side of the city, a good distance from the cluster of grow houses along the toll road in Aurora.

Agents installed a camera outside of the home, the affidavit said, and watched the shipments of marijuana arrive from across town.

Investigators tailed the BMW for about two miles, to a home located in an industrial area off West Holden Place. The driver parked in front of the house, where detectives believed he brought the trash bag and the box inside. The investigators followed the BMW driver back to the home on South Bryant Street – the alleged marijuana stash house – and saw him carrying two grocery sacks, suspected to be full of money as payment for the marijuana delivery.

Meanwhile, detectives were still staking out the home on Holden Place when they saw a man in a Dodge Ram pickup truck with a Missouri license plate pull up. When the man left the home about two hours later, he was carrying two full trash bags and put the bags in his tool box in the back of his truck. He shook hands with another man at the home and drove away.

Investigators followed him to a Motel 6 in Thornton, where they pulled him over for a traffic violation. In his truck’s tool box, the officers found several vacuum-sealed bags of marijuana – 27 pounds in total that he purchased from the home on Holden Place, he told the officers.

The man gave the officers few details about who sold him the marijuana and said he was driving the product to Kentucky.

The marijuana grow operations aren’t just located in the cities along the Front Range.

In September 2016, investigators received a tip about a large outdoor grow farm near Rifle, in Garfield County. At the farm, they found workers harvesting marijuana plants and loading them onto a large truck that was bound for a warehouse in Grand Junction.

When Sheriff Lou Vallario’s deputies arrived at the farm, about a dozen workers ran away, trying to elude the authorities. They were eventually taken into custody, but they spoke little English – if any at all – and even when investigators interviewed them with translators, it was hard to communicate. They spoke dialects specific to their home regions of China.

In the end, the owner of the property, Long Luong, was charged and sentenced to seven years in prison.

Vallario said he viewed the workers as more victims than criminals.

“What I see more of is almost like an indentured servant-type relationship,” Vallario said. “We don't believe most of those people were aware whether they were working in a marijuana [operation]. It was an opportunity for them to find a better way of life in our country, and they were misled.”