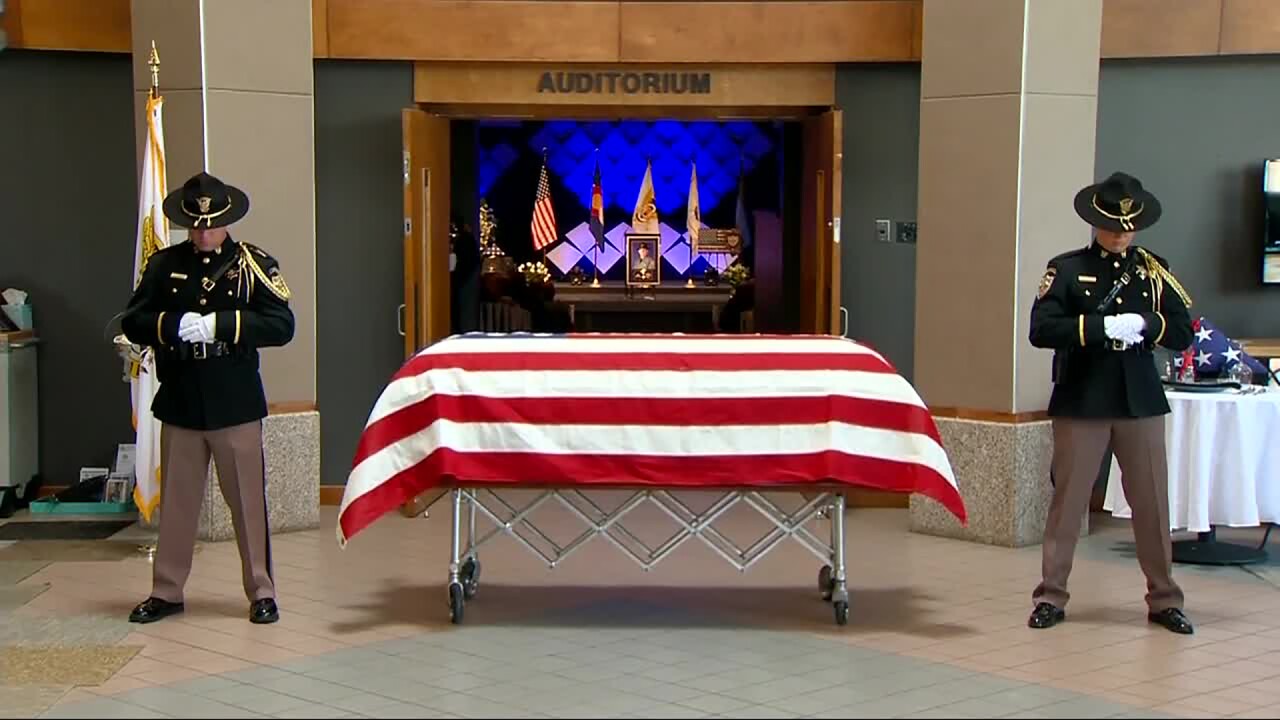 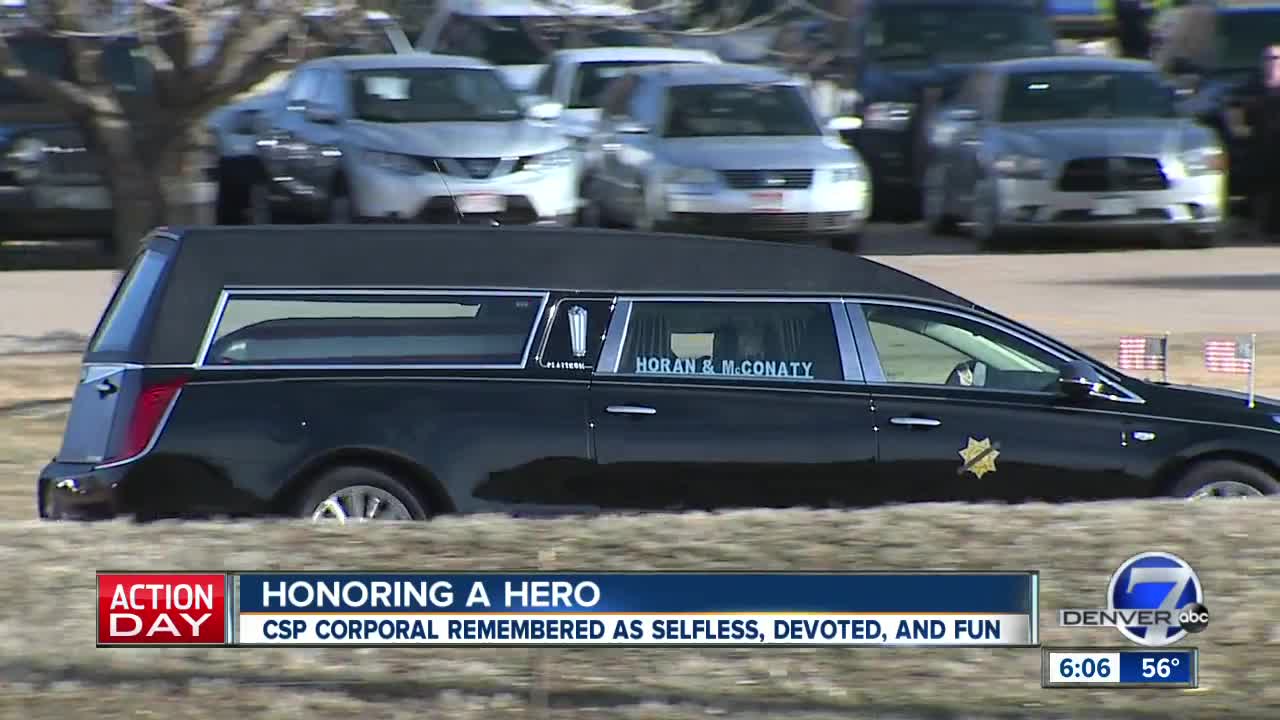 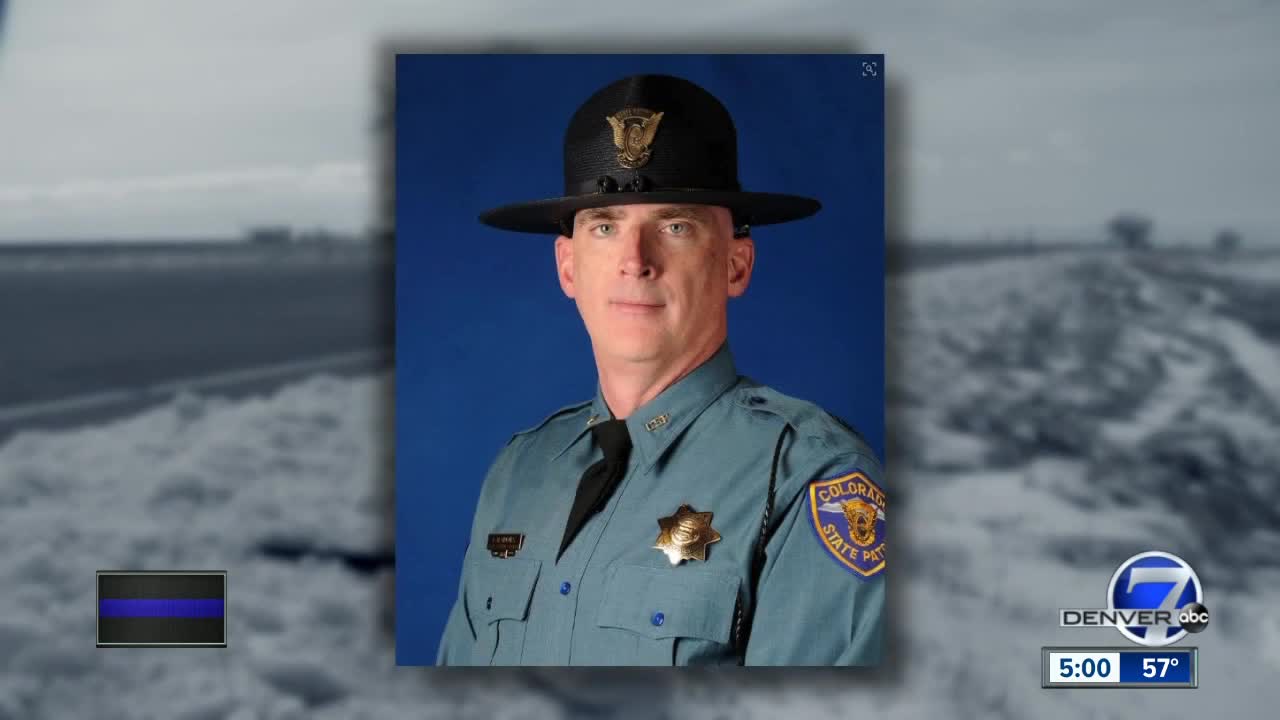 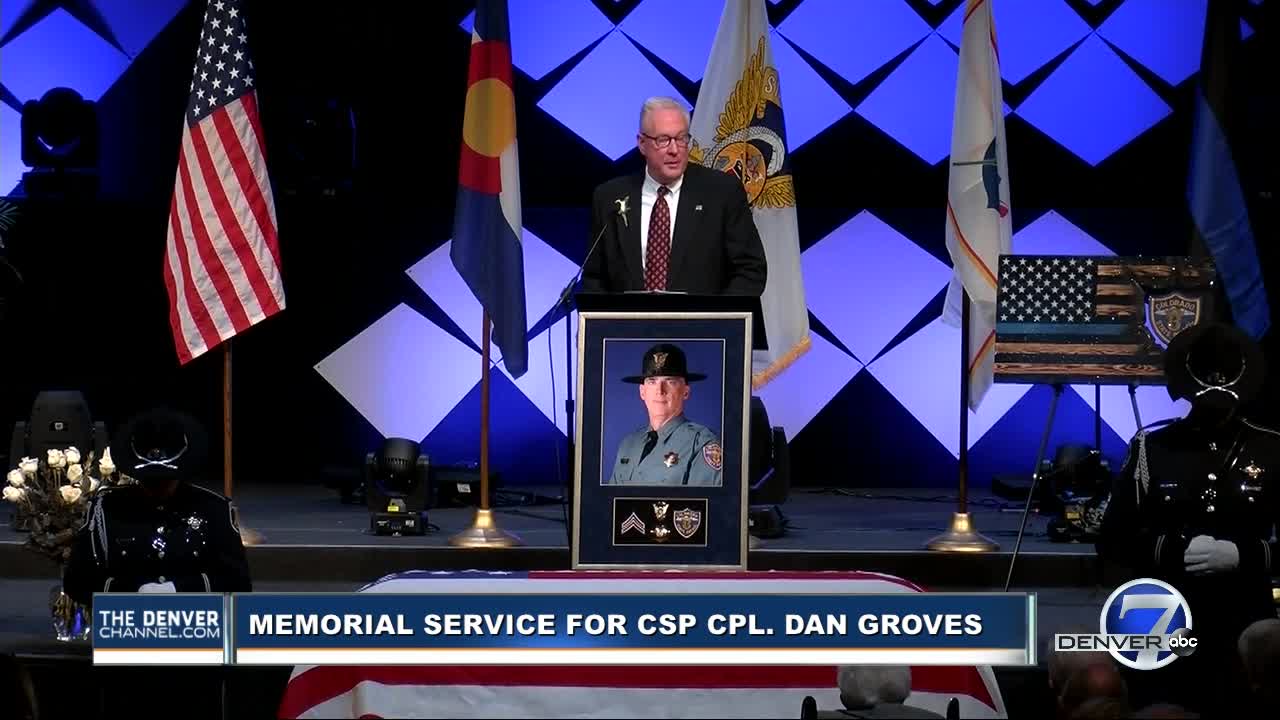 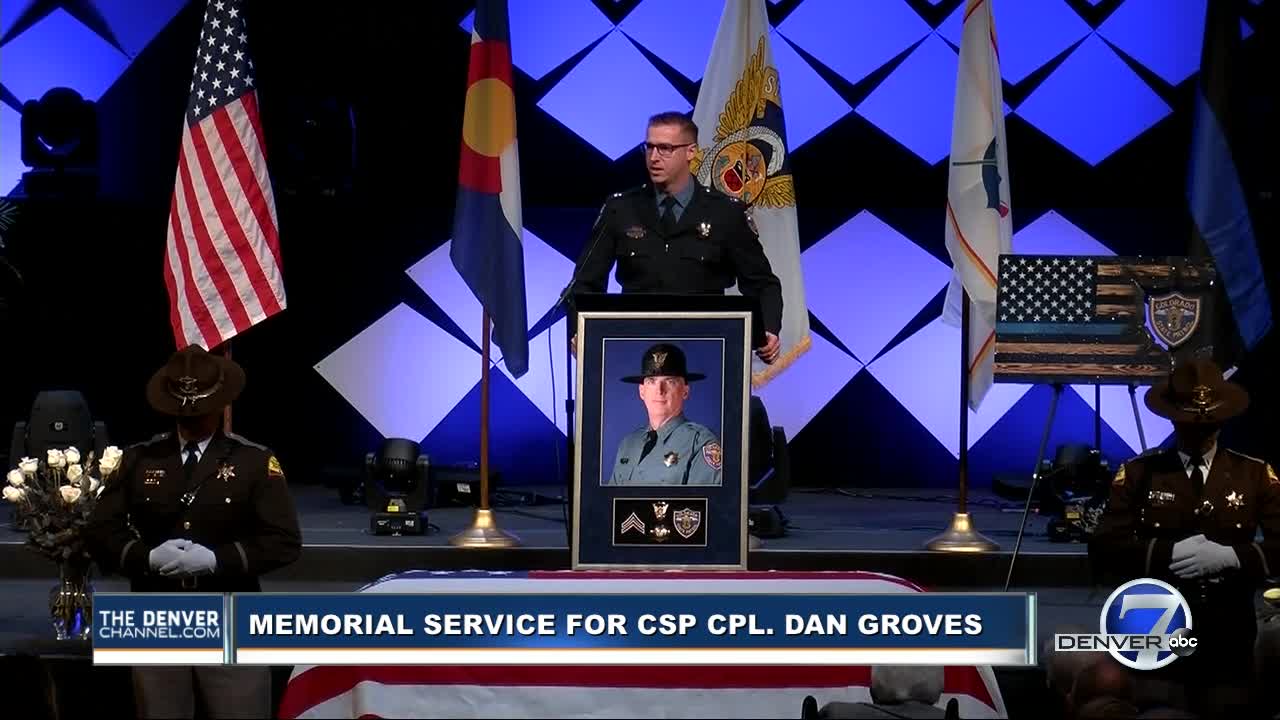 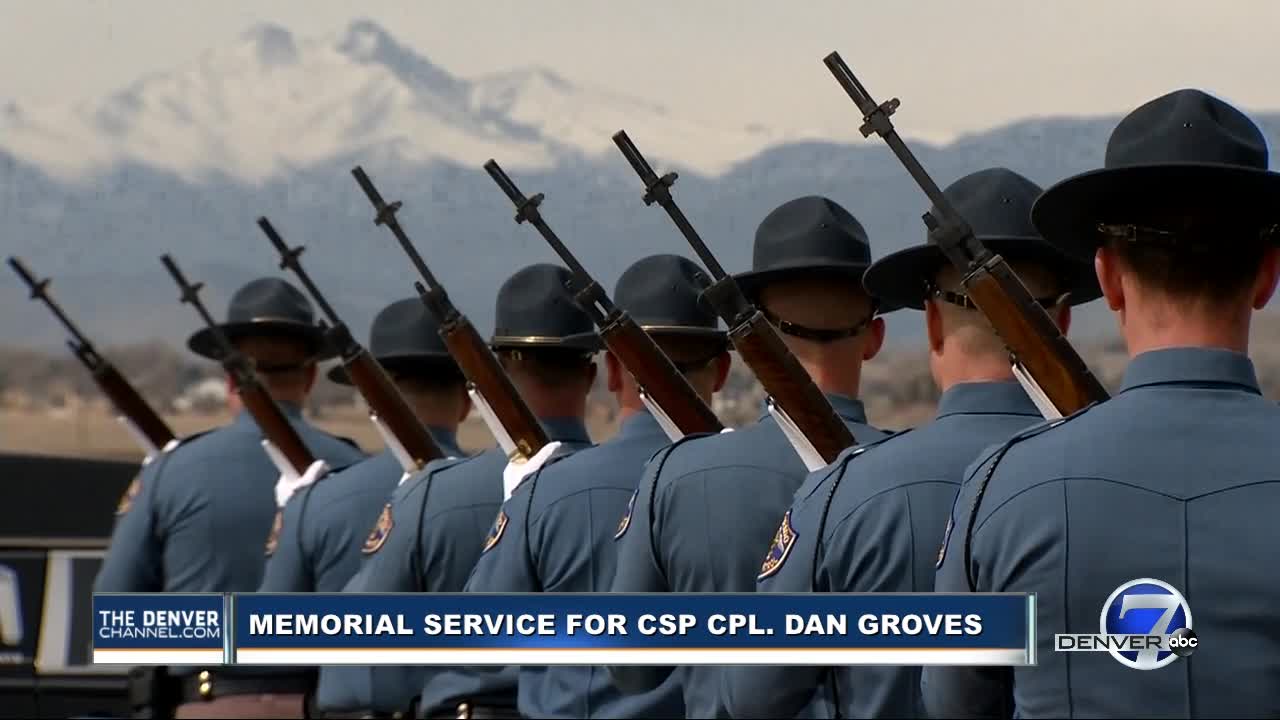 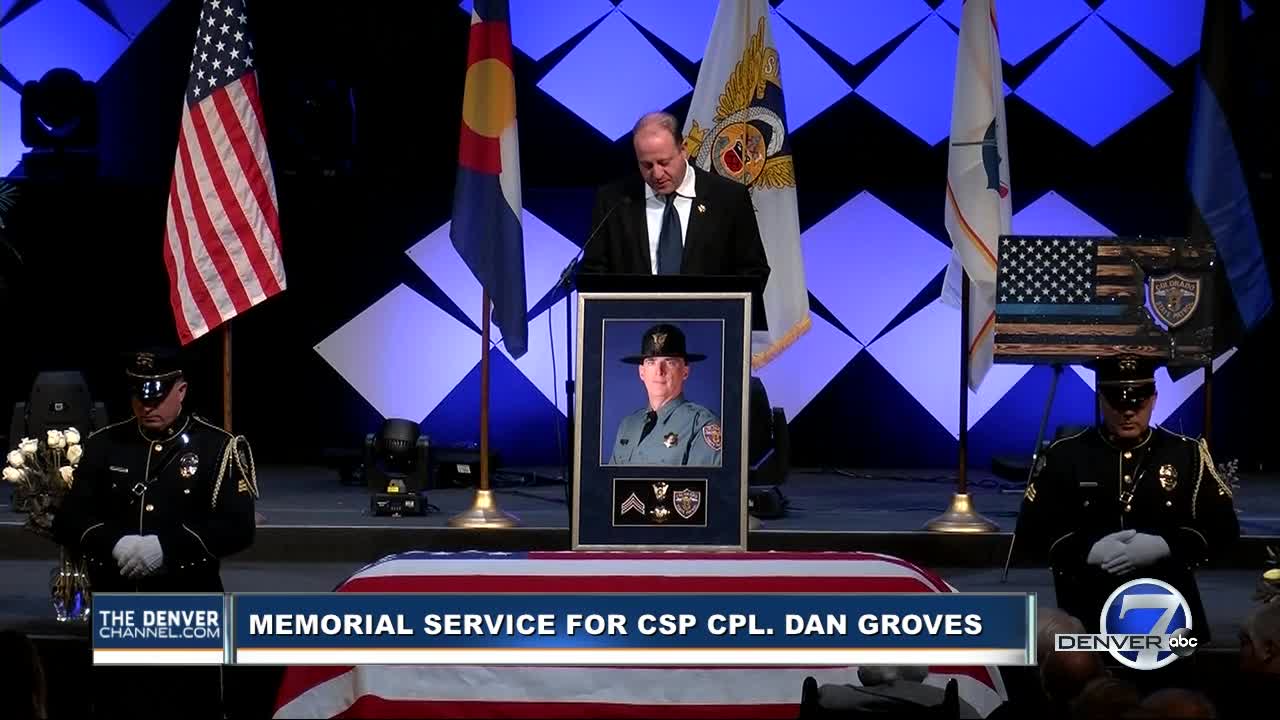 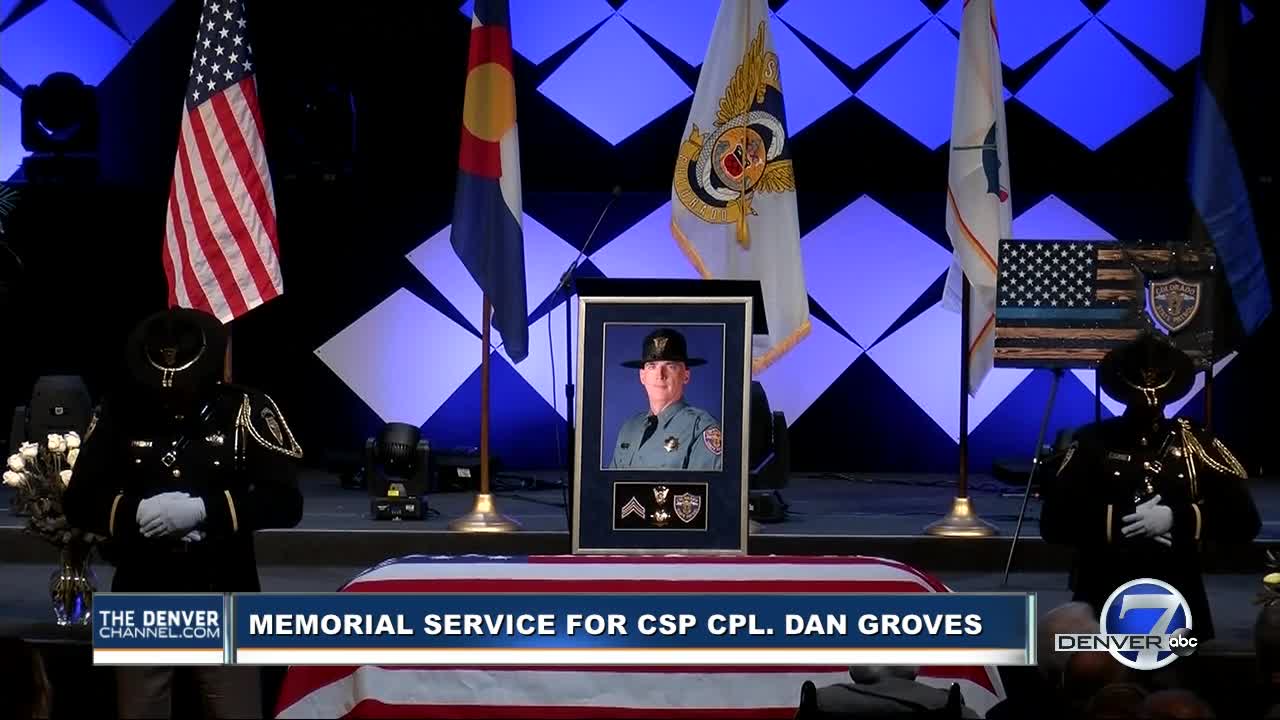 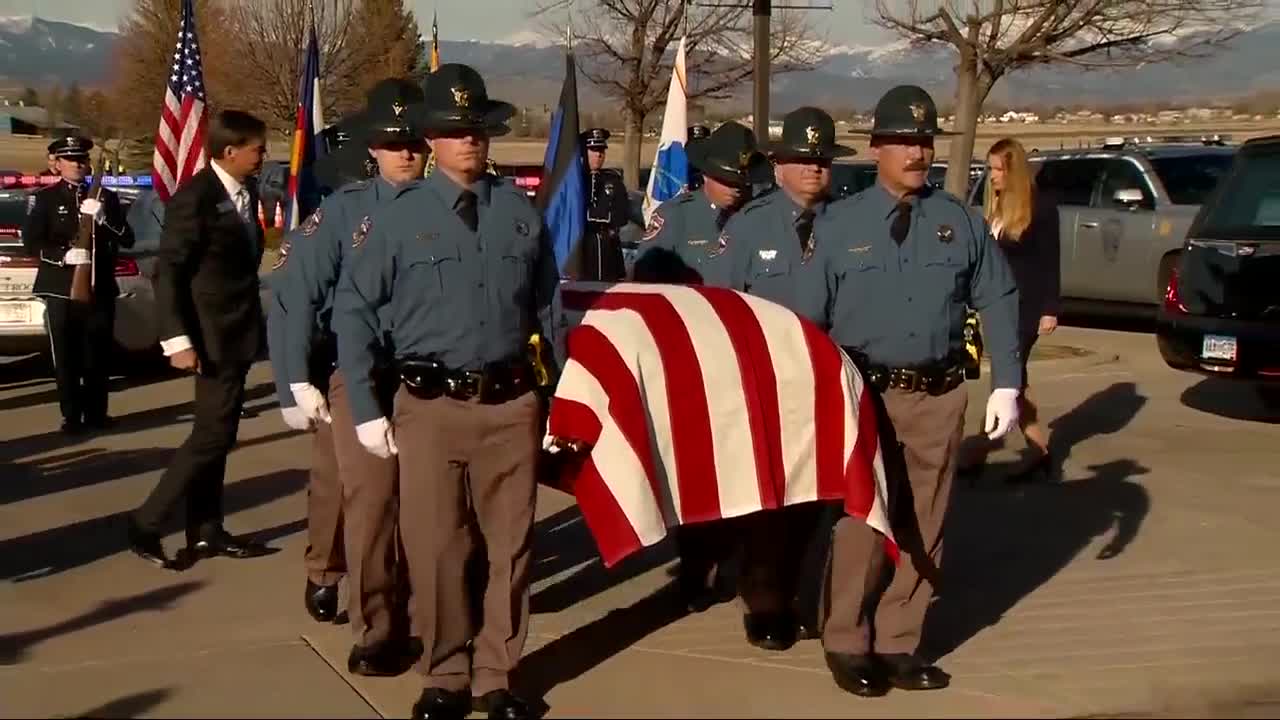 “Dan remains in our hearts. And you all remain in his heart,” St. John the Evangelist Catholic Church Rev. Steve Adams, said as he stood at the front of LifeBridge Church in Longmont. “And that’s what allows us to be able to face the future – to move on, to move ahead. Not leaving Danny behind, but bringing him with us.”

Hundreds of people attended Groves’s memorial service Thursday morning at LifeBridge Church. He was killed during the blizzard on March 13 when a driver struck him on Interstate 76 near Roggen.

CSP Trooper Randy Noftsger said Groves understood how threatening the conditions would be that day on the highway.

“But he knew that people were going to be getting stranded and that that highway was going to be getting closed, so he went,” he said. “He went out that day to save a life. Dan always went. All you had to do was ask and before you even finished asking, Dan was asking, ‘Where do you need me to be?’ That was Dan. Dan loved this job. He loved serving people, absolutely loved it.”

Troopers who worked alongside Groves, as well as Gov. Jared Polis and Groves’s friend from college, spoke highly of him at the memorial service Thursday.

Groves left an IT job in Chicago to join the CSP because he had a strong desire to serve others, Polis said, though it was a tough decision to leave his family members in Illinois.

When he joined CSP in 2007, he was assigned to Clear Creek and Summit counties and worked out of the Frisco office. After several years there, Groves transferred to the business intelligence unit’s headquarters, where he helped support the organization’s technology.

In that position, he met almost everybody in CSP, said CSP Chief Colonel Matthew Packard. He gained a reputation as the guy to go to if you had a problem.

“Dan was a ‘yes man’,” Packard said. “But the right kind of ‘yes man.’ Not because the boss or chief told you so. He was the kind that when you needed help — it didn’t matter what it was for — the answer was yes. Dan would be there. Dan was about service.”

And members of CSP never miss an opportunity to serve, he said.

“We just don’t,” he said. “Dan sacrificed his life seizing one of those opportunities to serve — one of many that day. Those who enter this line of work understand the risks related to this profession. Dan knew. We all know that Dan knew what was on the line. It’s that he knew that that makes the decision he made that much more noble. … The members of the CSP are among the bravest I know. We are not afraid to live by our values. We are not afraid to stand up for what's right; we are not afraid to run toward danger.”

Groves saved lives with this mindset. Packard said the manner in which he served will continue to save lives for years to come.

After a few years of work at headquarters in the BIU, Groves was promoted to corporal and based out of the Weld County office.

Each of the speakers remembered Groves as a man who took his job seriously, but said if you knew him beyond the uniform and short haircut, he was a goofy, fact-checking and reliable friend to everybody he met.

CSP Capt. Dan Haley and Groves were assigned to the same room during their academy training. Groves was the first person to buy you a beer, but also the one who ensured you’d get home safely, Haley said.

Groves was also the person who would call you out on improper grammar or incorrect information, he said.

“There was no way to win an argument with him unless you checked your facts and you had more of them than he did,” Haley said.

When Haley published a tweet about Groves after he died, he said he realized he had used an apostrophe in the wrong place.

Groves always had puns and dry jokes up his sleeve, Haley said. Sometimes, he’d even go to trainings in his PJs instead of police sweats, just because he knew it would make people smile.

But he was also an inspiration to those who worked alongside him.

“We know that Dan made a difference,” Polis said. “The public knew him and knows him now and will remember him as Cpl. Daniel Howard Groves, a proud member of the CSP, a dedicated public servant who put his life on the line every single day – as his brothers and sisters in blue do to serve our communities and keep the rest of us safe from harm.”

He left a deep impression on those he worked with each day, Haley said. While talking with Groves’s team, one of the members said they had been working that day and heard the call over the radio.

“There was nothing he could do,” Haley said. “There was no way he could get to the hospital. So, he kept doing what Dan would do: He continued to serve. The most difficult thing to do in that moment — what none of us wanted to do at that time. But he went out and did it because he had such a great example in Dan.”

Groves was also a family man who remembered everybody’s birthday and would send handwritten cards. Polis said Groves was so committed to his family that he once endured a five-hour taxi ride with no air conditioning through rural New Mexico to be with family for his parents’ 50th wedding anniversary.

In the wake of his death, longtime friend Chris Remington said Groves would want to encourage people to follow their dreams and put in the hard work to achieve them. To cherish family and embrace God, or whatever higher power they believe in. To forge deep, meaningful friendships, attend concerts and ski in the powder.

On a more serious note, Remington said, Groves would also ask drivers to slow down on the roads, yield to emergency personnel, use headlights and allow for extra space between vehicles during poor weather conditions.

After Groves’s death, people around the country offered their condolences and support for his family and CSP. Flags were set at half-staff, offerings were left at the CSP office in Greeley, a 10-year-old boy dedicated a mile run to Groves and more.

“He’d say he doesn’t deserve any of this, but he’d be the only one who thinks that,” Remington said. “So thank you, Groves, thank you, Dan, thank you for your service to others. Thank you for putting other people first, for your loyalty, for always being there for us, for being a hero. We will never forget you.”

Groves is survived by his parents, siblings and partner.