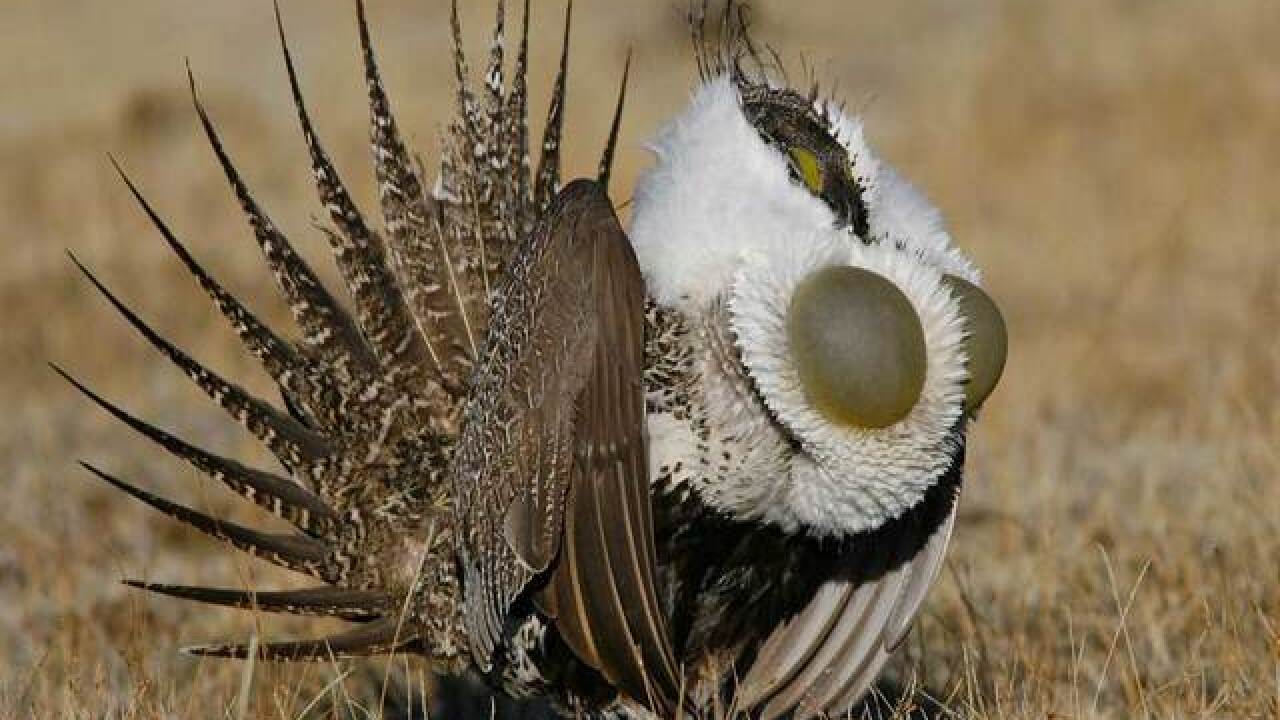 DENVER (AP) — Some governors in the U.S. West say a new Trump administration directive threatens to undermine a hard-won compromise aimed at saving a beleaguered bird scattered across their region.

"It took one of our tools out of the toolbox," said John Swartout, an adviser to Colorado Gov. John Hickenlooper.

Hickenlooper told federal officials in an Aug. 2 letter that he opposes the change. Nevada, Oregon and Utah also expressed opposition or concern.

A spokeswoman for the U.S. Bureau of Land Management, which issued the directive, said the agency would work with the governors on "adjusted" plans.

Greater sage grouse are spiky-tailed, ground-dwelling birds about the size of chickens. They are best known for the males' showy displays in springtime mating dances.

They once numbered in the millions, but the U.S. Fish and Wildlife Service now estimates the population at 200,000 to 500,000. Experts blame energy development that broke up the bird's habitat, along with disease, livestock grazing and other causes.

Their range covers about 270,000 square miles (699,300 square kilometers) in parts of 11 Western U.S. states and two Canadian provinces. The largest concentrations are in Wyoming, Montana, Nevada and Idaho.

In 2010, the Obama administration said the bird would need protection under the Endangered Species Act, which would have brought restrictions on drilling, mining, ranching and other development.

But in 2015, the administration reversed course, announcing an intricate agreement called the Sage Grouse Initiative that relied on federal agencies, states, ranchers and others to save the bird without invoking potentially stricter limits under the endangered species law.

One tool states planned to use was requiring developers — such as energy companies drilling for oil — to replace destroyed or damaged habitat with similar land elsewhere. The practice is called "off-site compensatory mitigation" and is envisioned as a last resort, if the damage cannot be avoided or minimized.

But the Bureau of Land Management, which oversees about 388,000 square miles (1 million square kilometers) of public land, announced on July 24 that it would no longer use mandatory off-site compensatory mitigation on most federal land.

The bureau said it did not have the legal authority to enforce the requirement. It was one of numerous Obama-era environmental regulations and practices rolled back by the Trump administration.

Some state officials and environmental groups worry that the government's decision to back away from the mitigation tool could weaken the Sage Grouse Initiative and make it harder to save the bird.

Hickenlooper, a Democrat, wrote a letter to the Bureau of Land Management saying the move "jeopardizes BLM's ability to implement or enforce critical components" of the federal plan for the greater sage grouse in his state. He withdrew his support for the most recent version of the plan.

Jason Miner, an adviser to Oregon Democratic Gov. Kate Brown, told federal officials that the state was "concerned and unsupportive."

"Compensatory mitigation is an important part of Utah's conservation plan for sage grouse, which is why the state is requesting a meeting with the BLM to discuss this potential conflict," Herbert spokesman Paul Edwards said in a written statement.

But Wyoming officials said they believe the new directive still allows them to require off-site mitigation plans, with Bureau of Land Management agreement.

Bureau spokeswoman Heather Feeney said the agency would still consider mandatory mitigation plans if they are required by states or other third parties, but she left open the possibility they would be rejected.

Federal officials could not provide details on how often the mitigation plans have been used.

The Fish and Wildlife Service is often consulted by other agencies on such plans and ever year provides tens of thousands of comments and recommendations on them, said Gary Frazer, the agency's assistant director for ecological services.

Frazer said mitigation plans have been used for species ranging from condors to the desert tortoise, but a comprehensive list wasn't available.

"I don't think we know what the implications will be," Frazier said of the Bureau of Land Management directive.

"Right now, the compensatory mitigation requirements are a key tool," said Nada Culver of The Wilderness Society. "Without them, there is no way to ensure we don't keep losing sage grouse habitat."