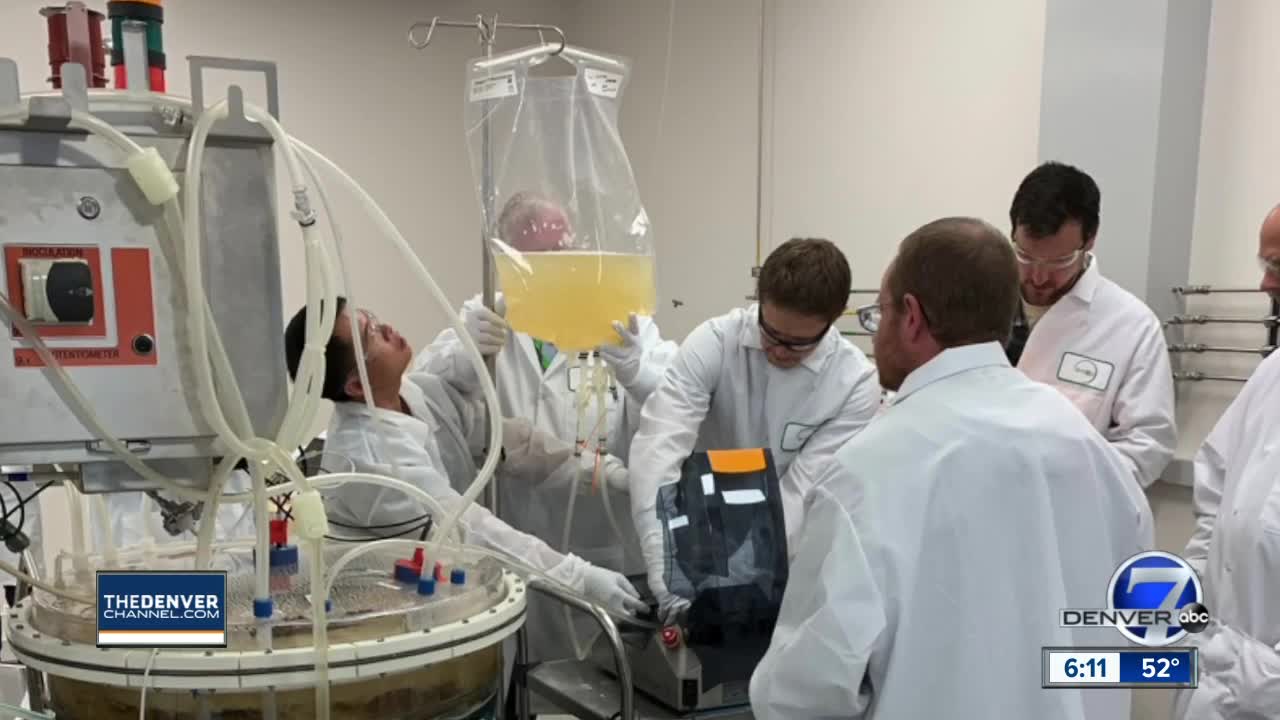 AveXis purchased a 700,000 square foot property in Longmont last year and will soon begin making the gene therapy treatment Zolgensma at the facility.

LONGMONT, Colo. — A few months ago, 2-year-old Maisie Forest was finally able to sit up on her own for the first time. Her development has been delayed by a rare genetic disorder called Spinal Muscular Atrophy, but last August, she received a groundbreaking treatment for the condition.

"It's a miracle drug," said Maisie's mother, Ciji Green. "It's not the cure, but we're talking about a disease that had no treatments four years ago," she added.

The "miracle drug" Green is referring to Zolgensma, a gene therapy for Spinal Muscular Atrophy made by Novartis-owned AveXis. On Tuesday, AveXis cut the ribbon on a new facility in Longmont where it will soon produce Zolgensma.

"Zolgensma is this first product we’ve had approved by the FDA for the treatment of kids with Spinal Muscular Atrophy," said AveXis President David Lennon.

The FDA approval came last May, just in time for Maisie to receive the treatment. But her mother still had to fight for the insurance company to pay for it. At $2.1 million per dose, Zolgensma is the most expensive drug or treatment ever made. Lennon said Novartis has invested half a billion dollars in the production of Zolgensma.

For Green, the cost is well worth the changes she's already seen in her daughter. Speaking to employees at the AveXis ribbon cutting, she called them heroes.

"To all of you it may just be a treatment, but to my family and so many others, it’s so much more," said Green.

AveXis says the same platform they used to produce Zolgensma might be applied to other therapies for other diseases in the future. The company is looking at developing treatments for Rett Syndrome, Friedreich’s Ataxia, and an inherited form of Amyotrophic Lateral Sclerosis, or ALS.

"There are actually thousands of these kinds of diseases. Usually they impact a few hundred kids or adults every year, but altogether there are potentially millions of patients who have genetic diseases around the world," said Lennon.

Lennon said AveXis chose Longmont for its production facility in part because of the infrastructure already in place. The building at 4000 Nelson Rd. was previously occupied by pharmaceutical companies AstraZeneca and Amgen. He said the available talent was also a factor.

AveXis retained most of the employees from the previous tenants. With new hires, the Longmont facility currently has a staff of around 300 employees and expects to grow to 400 by the end of 2020.