From the Sugar Sisters to the Little Sistas: Young girls' baking business in Highlands Ranch gets an unexpected treat

These two young sisters — 11 and 9 years old — were surprised by a recent big gift for their business venture, Little Sistas Treats. 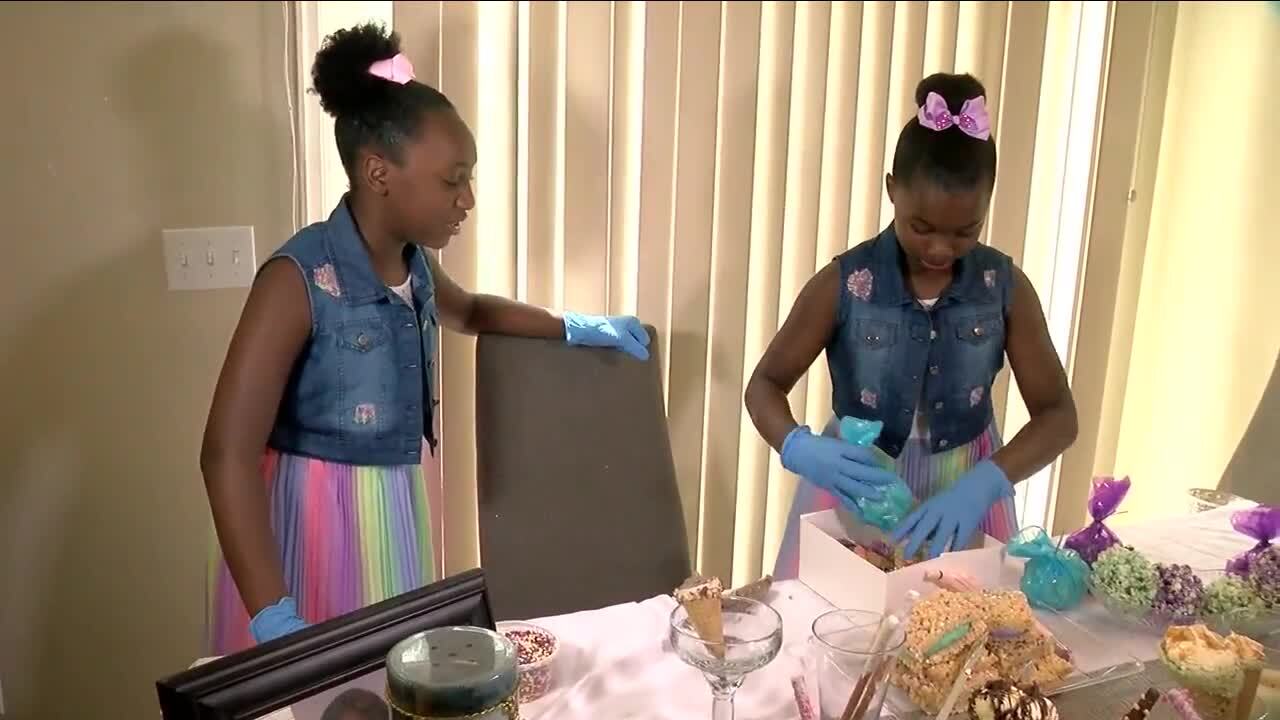 HIGHLANDS RANCH, Colo. — Cakes, cookies, and ice cream cones are more than sweet treats for 11-year-old Zyaire Hawkins and 9-year-old Char’Les Hawkins. For them, desserts are a serious business venture.

“We started planning it out on paper, our flavors, and what we would do with our cones,” Zyaire said.

“The girls have business meetings. They are serious about this thing,” said the sisters' mother, Marietta Hawkins.

According to Marietta, the young entrepreneurs love doing research for their business.

So while picking up a friend’s birthday cake from Sugar Sisters Bakery in Castle Rock, Marietta told the owners she wanted to bring her daughters to the store to show them what the future may hold.

One month later, Marietta and the girls stopped by.

“I told (the employee), ‘Hey, can you go get the sisters? I want them to meet my girls — Little Sistas Treats,’” Marietta said.

Molly Witt, Sugar Sisters Bakery co-owner, said she and other co-owner Rebekah Lydon had been waiting for the girls to come in.

When the owners of Sugar Sisters Bakery came to the front of the bakery, they had an unexpected treat for the girls of Little Sistas Treats.

Witt and Lydon said Marietta's story about her daughters’ business touched their hearts. So, they tried to figure out a way to uplift the young businesswomen who they knew would face many challenges.

“These are two young black girls who want to own their business and with everything going on we wanted to be authentic with how we navigated the issue,” Lydon said.

Witt said a few days after Marietta visited their bakery, Lydon texted Witt with an idea — giving the store's COVID-19 donations to the girls.

But there was a problem.

Lydon and Witt couldn’t remember the exact name of the girls’ business and couldn't find it anywhere online. They waited and hoped that one day the girls would come to the bakery.

One month after their search for Zyaire and Char’Les, the girls walked through Sugar Sisters Bakery’s front door.

“We said, 'Oh my gosh, you’re here, we are so excited that you are here,'” said Lydon. “The Little Sistas and the Sugar Sisters — it was just meant to be.”

The women told Denver7 that most of the COVID-19 donations they received went to specific causes and organizations. But the money they gave to the girls came from customers who left it up to them to find a way to help others.

“For me, it was very emotional because I just thought 'Wow, somebody was thinking about us, somebody remembers us,'” Marietta said. “I think it’s a great lesson to my daughters: When you give, it comes back to you.”

Zyaire and Char’Les thanked Witt and Lydon for the gift and said they are now focusing on the future of their business.

“We want to get a food truck. We want to hire other young girls,” Zyaire said.

Both Zyaire and Char’Les said Witt and Lydon inspired them to dream bigger, and they hope to inspire more girls to become their own CEOs.