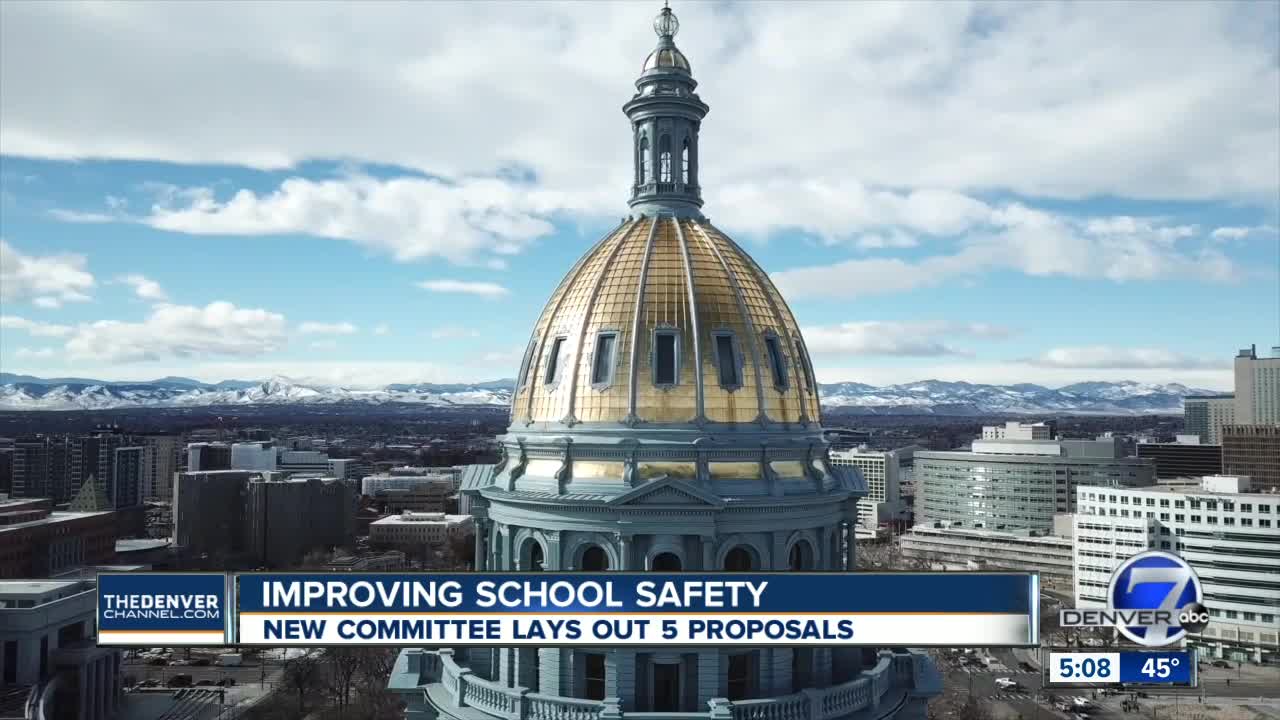 The group, composed of an equal number of Republicans and Democrats, was formed after the STEM Highlands Ranch School shooting in May, which claimed the life of Kendrick Castillo.

In a series of four meetings, lawmakers listened to experts, parents, students and others to try to identify where lapses exist in schools and what the state can do to help. The committee was only allowed to create five bills to move forward.

Here is a look at the five bills that will now move forward to the state legislature:

Enhancements to Safe2Tell: This is a bill that will look at whether improvements can be made to the Safe2Tell reporting system to make it more efficient. It will look at updates to advertising campaigns, how the reporting process works, law enforcement’s ability to prevent imminent harm and how to better align the program to the crisis hotline among other things.

“It’s time for us to look at what does it, Safe2Tell 2.0, look like,” said Rep. Dafna Michaelson Jenet, the committee chair.

Behavioral Health Sick Days: This bill will require school districts to update their excused absence policies to allow for students to take a day off for mental health reasons. The goal of the bill is to allow students to feel more comfortable speaking up when they need a day off for behavioral health reasons, whether it is for the loss of a relative or another traumatic event.

Interagency Working Group on School Safety: This bill would create a working group to review all of the agencies and groups involved in school safety to identify gaps or overlaps as well as ways to fix them. The goal of the bill is to streamline some of the programs offered to schools and to better distribute resources. The group will also work to identify the best school safety standard practices for districts to adopt, improve transparency and facilitate interagency coordination.

“The most effective bill is, quite frankly, a wonky bill. It’s a bill about establishing priorities, figuring out where we can get the most results for the money we’re spending,” Senator Paul Lundeen said. “We have gaps, we have overlap, we’re just doing government not as well as we could be doing it.”

Services for Juveniles with Severe Behavioral Health Conditions: This bill tasks the School safety Resource Center with creating a working group to look for ways to improve behavioral health treatment for juveniles in the state. The goal of the bill is to find out whether there are enough short and long-term resources available to students in need of severe behavioral health help without being sent out of the state for treatment.

The bills will now move forward to the full state legislature when it reconvenes in January.

A resolution was also passed by the committee to show support for the I Love You Guys Foundation and all of the work it has done to both raise awareness about school safety and change district standards.

“You can’t just sit at home and close the door and hope that things are going to get better unless you’re involved. That’s why it’s important for me to be here,” Castillo said.

He was pleased with the results and the fact that lawmakers on both sides of the aisle were able to come together to work toward solutions.

However, Castillo said there’s still a lot of work to be done in the name of school safety.

“Have they gone far enough? No, not yet. I think that the changes are incremental and they’re happening, but I wish they would happen somewhat quicker,” Castillo said.

He’s not convinced that any of the bills that moved forward would have made a difference in the case of the STEM School shooting.

Castillo believes part of the responsibility comes down to legislators, but a bigger part comes down to communities and school districts getting involved in the conversation to create quicker, more meaningful change.

He supports some gun legislation, like limiting magazine capacity, but as a hunter himself, Castillo believes there needs to be a balance. Castillo has been vocal about supporting the idea of armed staff in schools who are highly trained and anonymous.

More than anything, Castillo doesn’t want another family to have to feel the loss his family now deals with on a daily basis, and says it will take a combination of solutions to keep students safe.

The committee did not discuss gun legislation or arming staff in schools. Lawmakers agreed that these bills are not the end-all be-all to school safety, but said they believed the bills are a good start.

“Above all, our students deserve to feel safe in our schools. I believe that we have made significant progress on this committee in doing just that,” said Sen. Fields.