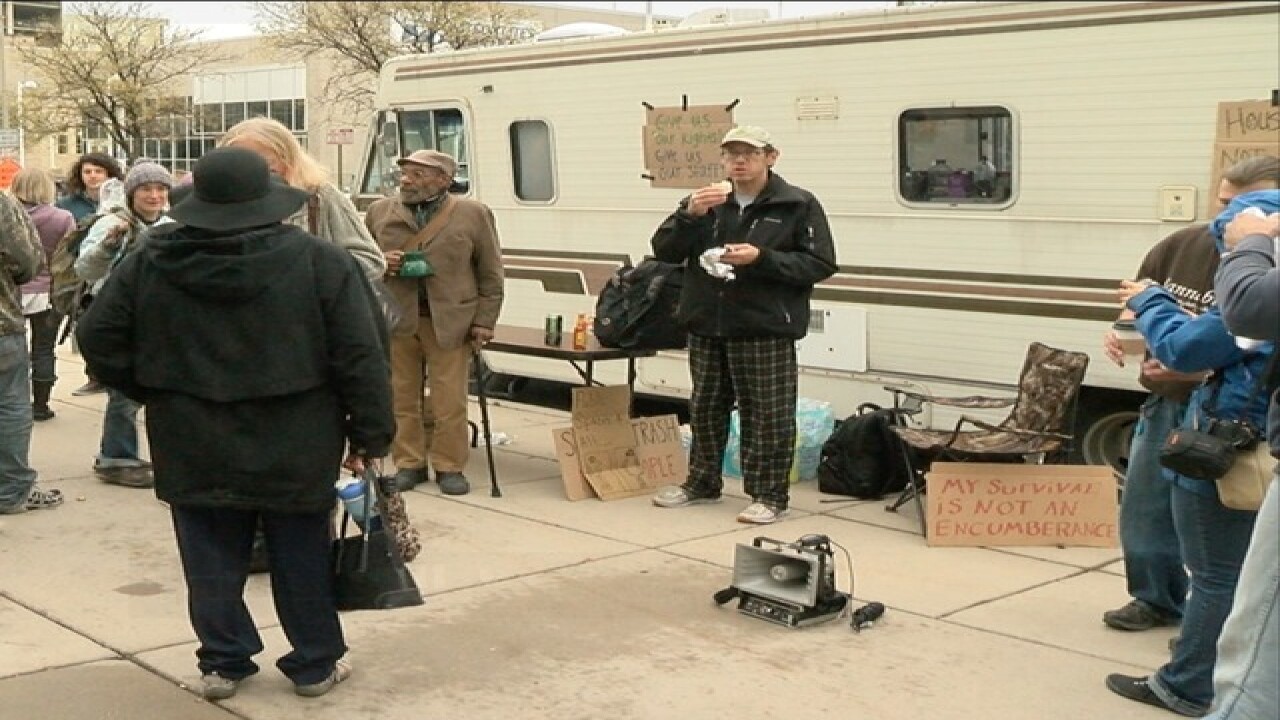 DENVER – A federal judge on Wednesday held the first of what is likely to be many hearings on a lawsuit filed on behalf of thousands of homeless people in Denver alleging the city and some of its employees have violated their constitutional rights and dignity.

Judge Craig B. Shaffer allowed dozens of homeless people into the courtroom without identification after an order last week.

He first pointed out the case has still not been certified as a class-action lawsuit. Though a motion to establish a class of homeless people was filed in early September, it does not have to be ruled on until Oct. 28.

READ: The full lawsuit can be found here.

Burton told Denver7 that 13 homeless people have died from hypothermia this year.

Burton said no one will stop him from sleeping on sidewalks and putting up a tent, if the weather warrants.

He said he won't stay in a shelter, because every time he does, he comes down with an illness.

He also said he can't get an apartment because of his credit.

Lead plaintiff Garry Anderson said he's been homeless in several cities and that Denver "is by far the worst."

He said Seattle allows the homeless to set up tent cities under the freeway.

"Police actually patrol the tent city," he said. "They have dumpsters out along the alleyways.  They've set up portable toilets for the homeless community.  They can do it here."

Anderson also said that homeless people have a responsibility to not leave anything behind when they sleep outside.

"When I get up in the morning, you never know I was there that night," he said.  "I don't leave garbage.  In fact, I'll pick up other people's garbage, just because that's what we need to do."

When asked about the city's response to the lawsuit, the Mayor's Deputy Communications Director, Jenna Espinoza replied via email:

“The City and County of Denver spends nearly $50 million a year on direct and indirect homeless services. In the last several years, the City has increased direct services, including overnight and day shelter services as well as increased access to housing for all people. Our focus is on connecting people who are on the streets to the individualized assistance needed to help them stabilize their lives and move forward. The city's practice is to first try and connect people to services and treatment, and if that doesn't work, people are given notice, usually multiple times, before any enforcement action is taken. These are complex challenges and we strive to be as compassionate as possible while also ensuring safety and public health for all Denver residents.”

Judge Shaffer voiced concerns over discovery in the case, as both defense attorneys and prosecutors pointed to difficulty in finding applicable information that could be used as exhibits in the case.

The defense said it had already put together more than 100 gigabytes of data for its discovery.

The lawyers said they had been using keywords such as “camping ban,” “Denver Rescue Mission,” and “homeless sweeps” in search to put together discovery, which Judge Shaffer called “fundamentally problematic.”

Attorneys for the plaintiffs argue in the suit that the city has engaged in “a systemic evisceration of thousands of displaced persons’ constitutional rights in order to clear the way for new housing and economic development in the Downtown Denver area.”

The argument comes after the city cleared homeless people from public spaces near downtown shelters – actions that allegedly continue, according to one homeless advocacy group.

In court Wednesday, those same attorneys argued the “enforcement of the policy in place is unconstitutional.”

Much of Wednesday’s discussion revolved around the defendants in the lawsuit. Aside from the city, Mayor Michael Hancock, Police Chief Robert White, Public Works Manager Jose Cornejo and the mayor’s chief of staff, Evan Dreyer, are among other defendants named in the case.

But Judge Shaffer explained to attorneys for the plaintiffs that some of those specific employees could claim qualified immunity in the case, which protects them from having to pay out civil damages in cases like this.

Some of the individual defendants have yet to answer the original complaints, which allows time for lawyers for the plaintiffs to drop some of those individuals from the lawsuit if they wish.

Judge Shaffer suggested the plaintiffs’ lawyers should instead focus on the city and county.

He also all-but invalidated the claim that the homeless people’s 8th Amendment rights were being broken, noting that clause is normally applied to people who are incarcerated.

A status conference on the case is set for Oct. 20 at 10 a.m. – just less than a week before the deadline for the class to be certified.