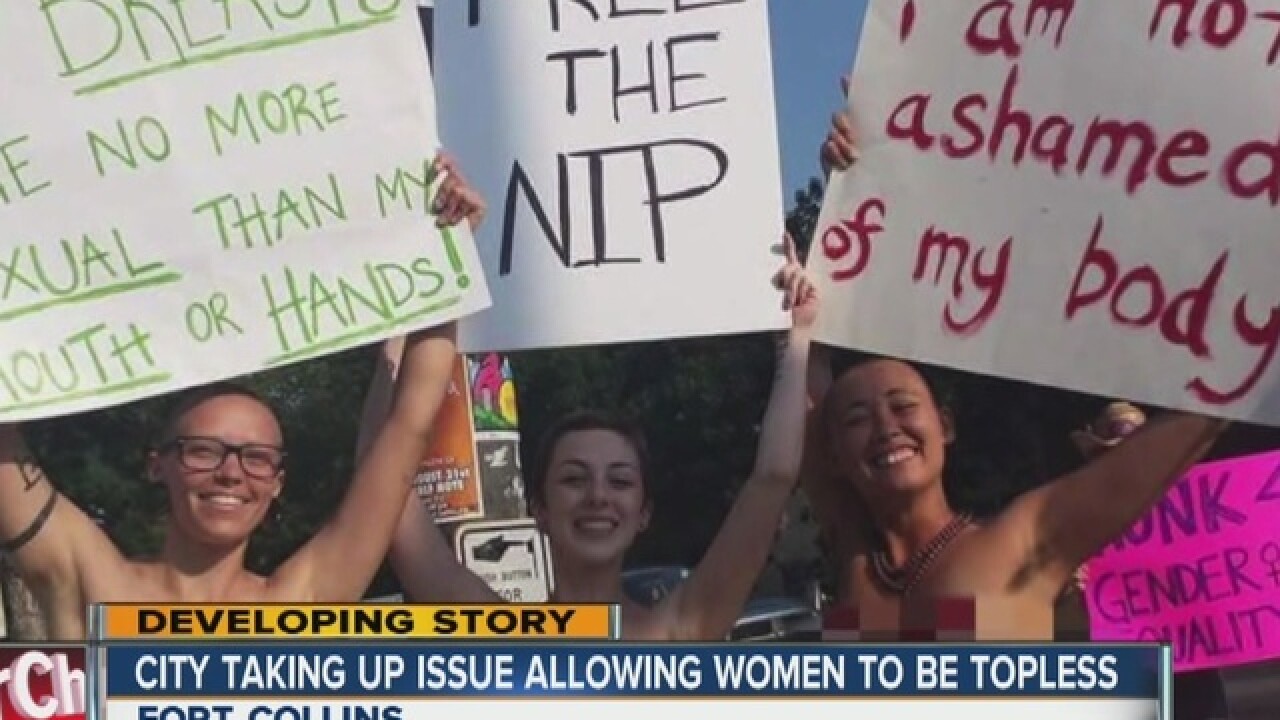 DENVER – A federal judge will allow a lawsuit claiming a Fort Collins statute that prohibits women from going topless in public violates the U.S. and Colorado constitutions to move forward.

U.S. District Court of Colorado Judge R. Brooke Jackson ruled Thursday he would allow the lawsuit, brought on behalf of two women and the Fort Collins chapter of the “Free the Nipple” organization, to move forward on the grounds the Fort Collins statute violates the Fourteenth Amendment of the U.S. Constitution, as well as the Colorado Constitution’s Equal Rights Amendment.

The city of Fort Collins, the defendant in the lawsuit, had sought to dismiss those claims, as well as a claim by the plaintiffs that the statute violated the Free Speech Clause of the First Amendment.

Judge Jackson agreed to dismiss the First Amendment claim, saying planned topless protests “do not constitute protected speech,” as he wrote in his order.

“[P]laintiffs’ conduct does not warrant First Amendment protection because they have not adequately stated that there is a great likelihood that their nudity’s message about the sexualized nature of certain laws is likely to be understood by those who view them topless in public,” Judge Jackson wrote, noting further that case law has shown that “public nudity itself is not inherently expressive of any particular message.”

But he denied the city’s motion to dismiss the other two claims in the suit.

In regards to the Fourteenth Amendment’s Equal Protection Clause claim, Judge Jackson found the plaintiffs had indeed “met [the] burden” of a violation as the city’s reasons for enacting the ordinance (“adequately summed up as Fort Collins’ desire to protect the public’s moral sensibilities,” according to the judge) “are also themselves premised on unconstitutional stereotypes of, generalizations about, and prejudices against women.”

The judge points to past case law that showed laws were in violation of the Fourteenth Amendment if it was passed to “create or perpetuate the legal, social, [or] economic inferiority of women.”

He also pointed to changes in case law over the 20th century that occurred as courts began to acknowledge that “real differences” between men and women perpetuated by courts over the years could only be used in determining discrimination violations when the laws compensate for historic inequities.

Judge Jackson determined the plaintiffs successfully argued the law fell into the way “real differences” had been used in old case law – which he wrote “adequately allege[s] an equal protection violation.”

He also upheld the argument by the plaintiffs that the Colorado Constitution’s Equal Rights Amendment should be applied to the case. It argues that laws “based exclusively on sexual status receive the closest judicial scrutiny,” and Judge Jackson agreed to do so since he had already ordered the Fourteenth Amendment claim to proceed.

The city of Fort Collins sent out a news release saying the order “does not lessen the City’s chances of ultimately prevailing in this lawsuit.”

“As the case moves forward to the hearing on the motion for preliminary injunction, we look forward to the opportunity to present evidence supporting the City’s position that the other two claims are also without merit,” Fort Collins City Attorney Carrie Daggett said in the same release.

Attorney David Lane, who is representing the plaintiffs in the case, said the judge’s order was “a great victory for women’s rights and equality under the law.”

In an interview with Denver7, Lane said the case was “absolutely” strong.

Up next in the case is an evidentiary hearing to determine whether a preliminary injunction against the Fort Collins ordinance should be issued. The hearing is set for Dec. 19 in front of Judge Jackson.

Lane speculated that should Judge Jackson grant the preliminary injunction, which he said he thinks will happen, Fort Collins would immediately appeal to the 10th Circuit Court of Appeals.