Officials from DOJ, FBI say that they are also reviewing latest photo allegations 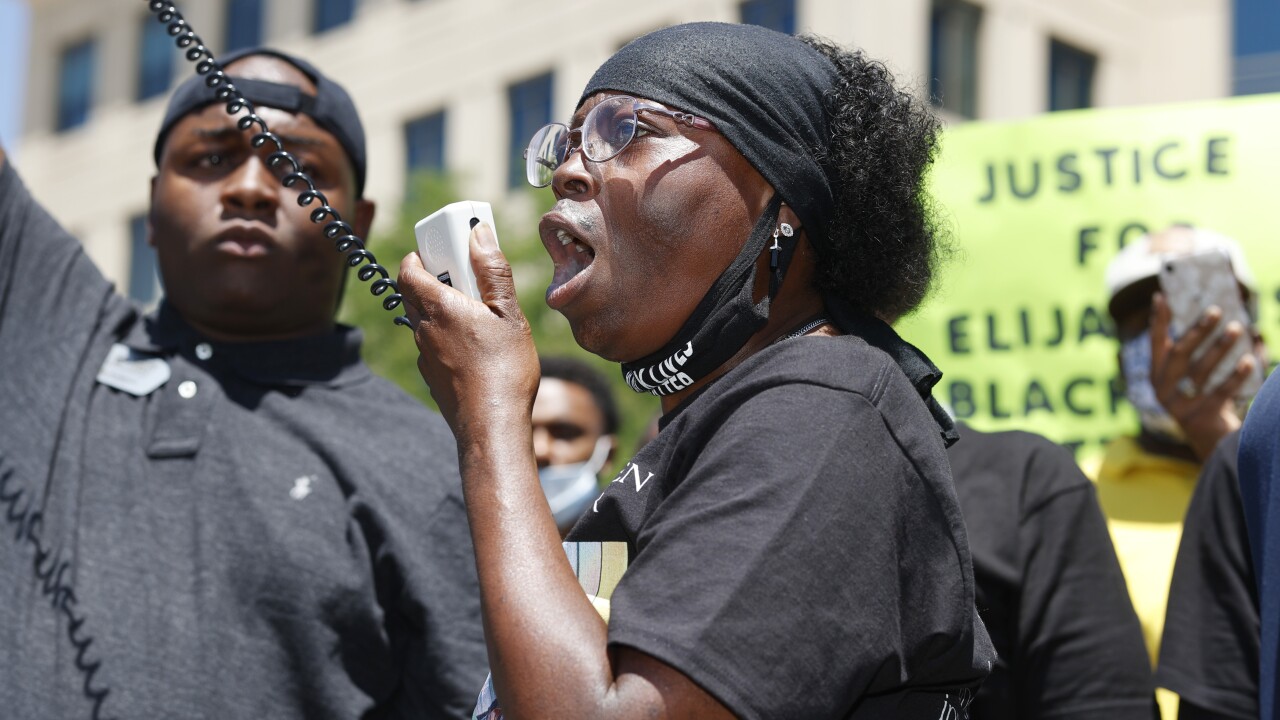 (Copyright 2020 The Associated Press. All rights reserved. This material may not be published, broadcast, rewritten or redistributed.)
David Zalubowski/AP
Sheneen McClain speaks during a rally and march over the death of her 23-year-old son, Elijah McClain, Saturday, June 27, 2020, outside the police department in Aurora, Colo. McClain died in late August 2019, after he was stopped while walking to his apartment by three Aurora Police Department officers. (AP Photo/David Zalubowski)

DENVER – Federal law enforcement investigators said Tuesday evening that they have been reviewing the facts of the Elijah McClain case for a possible civil rights investigation and said they were aware of the latest photo allegations involving Aurora police officers and were gathering more information.

In a rare joint statement regarding an ongoing investigation, the U.S. Attorney’s Office for the District of Colorado, the U.S. Department of Justice’s Civil Rights Division, and the Federal Bureau of Investigation’s Denver Division confirmed they had been looking into McClain’s case.

“The standard practice of the Department of justice is to not discuss the existence or progress of ongoing investigations. However, there are specific cases in which doing so is warranted if such information is in the best interest of the public and public safety. Recent attention on the death of Elijah McClain warrants such disclosure,” the joint statement issued around 5:45 p.m. Tuesday read.

The federal offices said that the FBI Denver Division and U.S. Attorney’s Office for Colorado started reviewing the facts of the McClain case last year “for a potential federal civil rights investigation.”

The departments and office said that the DOJ’s Civil Rights Division has also been involved.

The release said that the investigation is ongoing and that federal investigators are working to gather more evidence from the Aurora Police Department and others involved. The federal officials said that “[t]o date, the city of Aurora has been cooperating.”

The federal officials also said they were aware of the reports from Denver7 and other Colorado media outlets regarding the three APD officers placed on administrative leave pending an investigation into a photo in which they were pictured mimicking the carotid hold in which McClain was placed prior to his death, as sources told Denver7 earlier Tuesday.

“We are gathering further information about that incident to determine whether a federal civil rights investigation is warranted,” the federal officials said.

The U.S. Attorney’s Office for Colorado, DOJ Civil Rights Division and Denver Division of the FBI said they “will have no further comment until both of those reviews are completed.”

Two sources told Denver7 Tuesday about the substance of the photos after Aurora Interim Police Chief Vanessa Wilson on Monday night announced the officers were being investigated for a photograph but declined to say what the photograph showed.

The picture depicting the involved officers was sent in a group text to other officers before it was reported to police officials, the sources said. Aurora police confirmed the photos were exchanged in October 2019.

The sources added that the interim chief had already notified the officers of their punishments but said the officers would be able to appeal. Aurora police have not commented on what sources have said regarding the photos or the punishment.

The photos were reported to the department last Thursday by a fellow Aurora police officer, the sources said. Aurora police spokesperson Officer Matthew Longshore said the police chief review board – comprised of the department’s three division chiefs and the deputy police chief – were reviewing the photos and will make a decision on whether, or how to, punish the officers.

Longshore said that the officers could potentially be terminated depending on the review board’s decision. Officers would also be able to appeal the decision.

Mari Newman, an attorney who represents the McClain family, said after news broke of the federal investigators looking into the case that she was surprised and pleased.

“I am both surprised and pleased to hear that a civil rights investigation is being considered by the FBI, U.S. Attorney's Office, and the Department of Justice's Civil Rights Division,” Newman said. “The Aurora Police Department has a long and sordid history of both brutality and racism, and a comprehensive civil rights investigation is long overdue. I invite these agencies to reach out and will happily provide information to assist in this critically important investigation.”

The announcement from the federal officials came moments after a special city council meeting got underway so the mayor and city council members could hear from police about the response to Saturday’s protests over McClain’s death, in which officers deployed pepper spray and smoke canisters.

Attorney General Phil Weiser was named as the state's independent investigator in the case last week.

Gov. Jared Polis said at a news conference Tuesday afternoon that it was important for law enforcement agencies across the state to develop trust with the communities they serve.