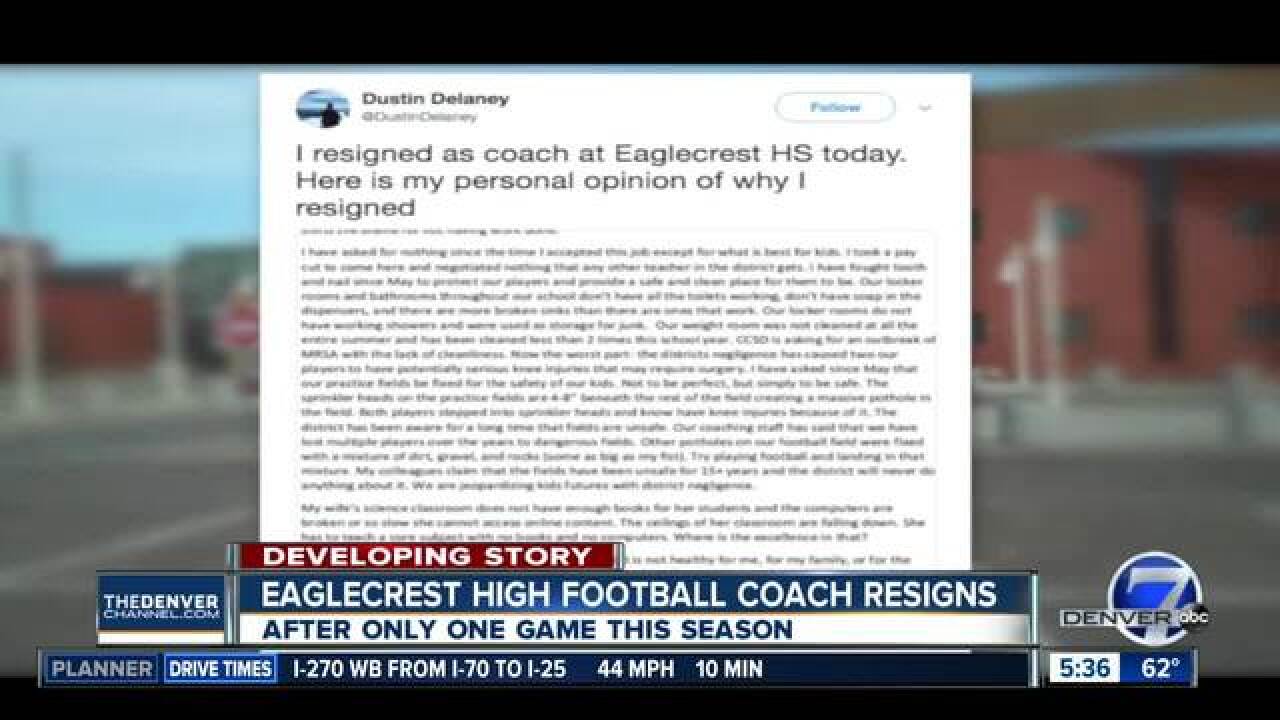 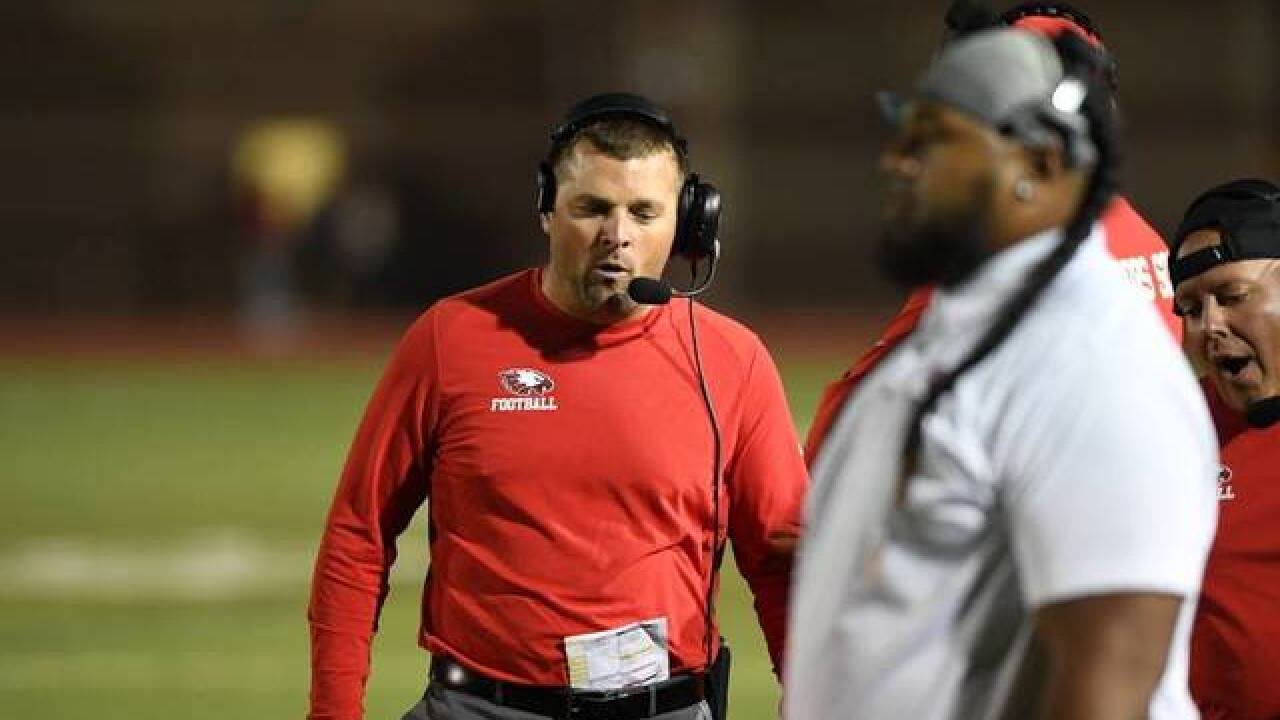 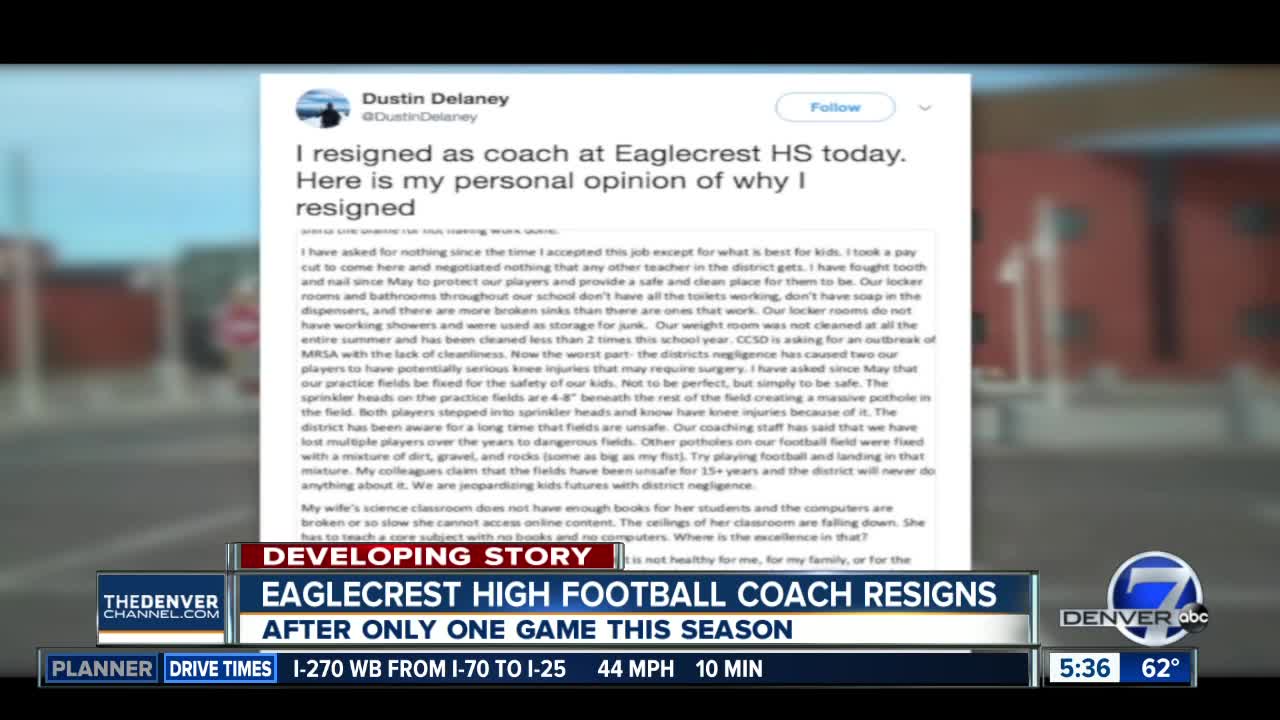 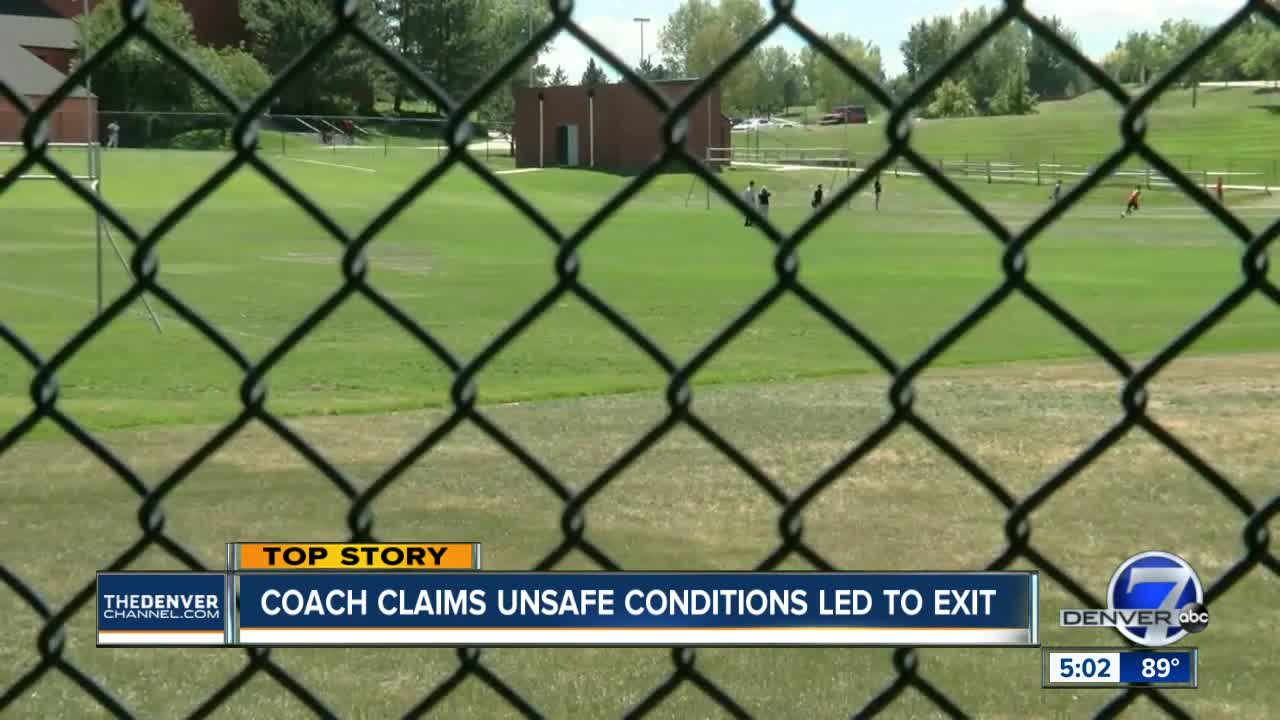 CHERRY CREEK, Colo. — The head coach for the Eaglecrest High School football team has resigned from his position, leaving behind a scathing letter that explained his abrupt departure.

Dustin Delaney posted a copy of the letter on his Twitter page and accused the Cherry Creek School District of neglecting the health and safety of students.

“Our locker rooms and bathrooms throughout our school don’t have all the toilets working, don’t have soap in the dispensers, and there are more broken sinks than there are ones that work," the letter reads. "Our locker rooms do not have working showers and were used as storage for junk."

This year was going to be Delaney’s first season as the head football coach. He came from Shawnee Mission East in Kansas this year to replace Mike Schmidtt, who had resigned in December.

Delaney’s hiring was viewed by many as a major accomplishment for the CCSD because of his winning football record, including a state championship title in 2014.

In the letter, Delaney said he took a pay cut when he accepted the job, but noticed problems starting in the summer.

“Our weight room was not cleaned at all the entire summer and has been cleaned less than two times this school year," he said. "CCSD is asking for an outbreak of MRSA with the lack of cleanliness."

He went on to complain about the condition of the fields in his letter, blaming it for the injuries of at least two students and saying that the student-athletes may need knee surgery as a result.

“The sprinkler heads on the practice fields are 4-8 inches beneath the rest of the field creating a massive pothole in the field. Both players stepped into sprinkler heads and (now) have knee injuries because of it,” the letter read.

"I resigned for one reason only," he told Denver7, "and that was the battles I fought over safety issues of the players."

Delaney said he asked that the fields be fixed numerous times for the safety of the players and accused the district of knowing about the problem for years. He alleged that the school has lost multiple players over the years because of the dangerous fields.

“Other potholes on our football field were fixed with a mixture of dirt, gravel and rocks (some as big as my fist)," the letter read. "Try playing football and landing in that mixture. My colleagues claim that the fields have been unsafe for 15+ years and the district will never do anything about it. We are jeopardizing (kids') futures with district negligence."

Delaney went beyond that, though, and talked about the conditions in the classrooms, too. He said his wife is a science teacher at the school and that there aren't enough books for students or properly working computers. He added that the ceilings in the classroom are falling down.

“I hope this letter and my resignation jump-start the fixes that our students deserve. After all, who doesn’t deserve safe facilities, areas they can take care of personal hygiene, and proper books or computers to learn with,” the letter concluded.

Delaney’s letter has been met with mixed reactions online. Some people wrote that the coach’s comments were unsubstantiated and reflective of his refusal to be part of the school. Others criticized Delaney for resigning, saying that it didn’t help solve the problem. Some agreed with the coach. A woman who claims to be a former soccer player at the school wrote that her fields were also unsafe.

One parent, who said her daughter is on the varsity cheerleading team at the school, wrote to Denver7 saying, “This is a mess and a sad situation for this amazing team. He makes this school look like it is in a ghetto... you realize the homes surrounding this school are $400-$700K... so angry at what he is causing.”

Denver7 reached out to the school to ask for a comment. The district sent a statement saying:

"It's unfortunate that Coach Delaney decided to leave his team at this point in the season. We have addressed concerns raised by Mr. Delaney over the summer and will continue to address needs as they arise. Eaglecrest has a long record of success academically and athletically and our focus moving forward is on our students. We met with players and parents this afternoon and look forward to a successful season with a new coaching staff."

Delaney cited numerous frustrations with the administration for resigning, saying the district cared more about adults than students and didn’t take the best interests of the students to heart when making its decisions.

Today, he told Denver7 that he was concerned about student welfare, but he "had zero issues with safety."

"Anytime we had (safety) issues, they were addressed right away," he said.

A former Eaglecrest Baseball coach said they were often in a situation where they had to "fundraise" to maintain facilities.

Al Bleser said he helped fill in a few holes in the sod on the ball field when he was coaching.

He believes it's time the district looks at alternative playing surfaces.

"Denver Public Schools has had Astroturf fields put in and they don't have the kind of money that Cherry Creek does," Bleser said. "Ultimately, I think it comes down to dollars."