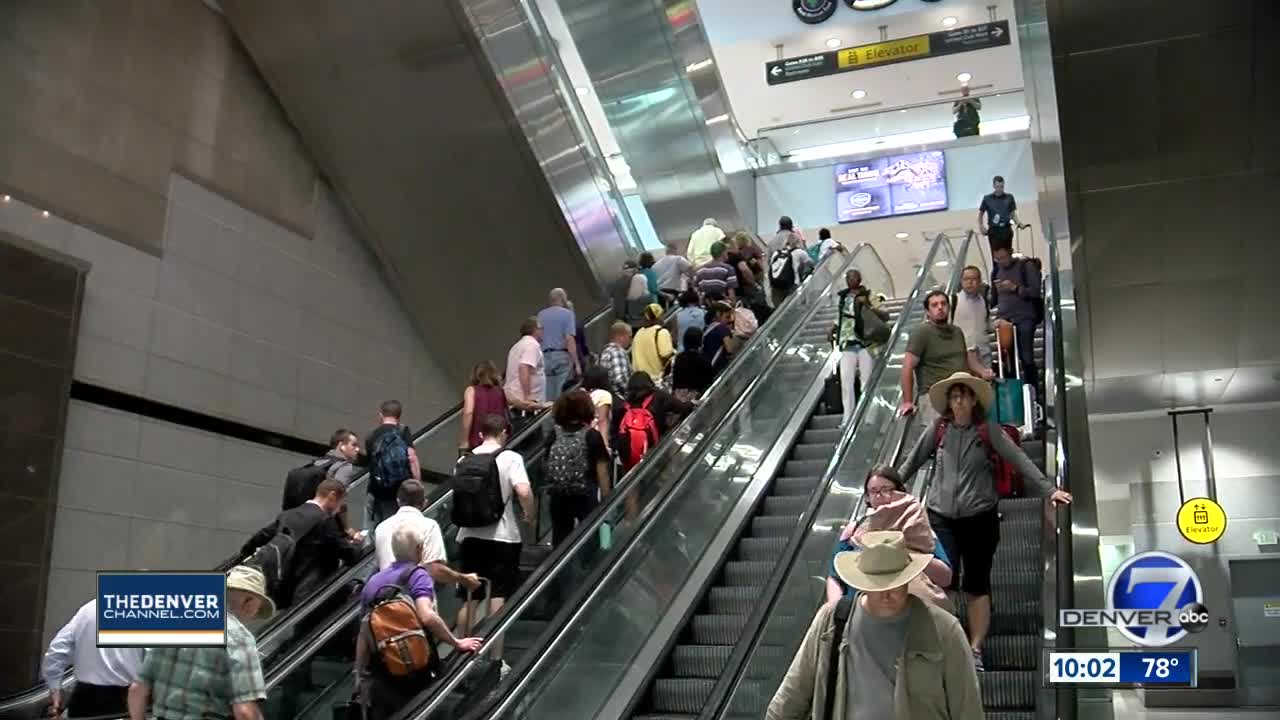 DENVER – Denver International Airport officials have accused the contractor for the airport's Great Hall terminal construction of "purposefully and knowingly interfering airport activities" through construction and repair delays, according to two letters to the CEO of the contracting company, another bump in the road for the massive project that had already been delayed by months.

The first letter– formally an initial breach notice for the airport's agreement with Denver Great Hall LLC to work on the terminal – said the company caused a fire in the construction area in June and then failed to repair the damage in a timely manner. It was signed by DIA's Sr. Vice President of Special Projects Michael Sheehan.

The letter, which was sent to the developer on Wednesday said the fire was ignited on June 20 and was, "caused by Developer's failure to take proper safety precautions for its hot demolition work."

The fire caused some of DIA's escalators to be put out of commission.

On July 8, DIA said it sent a letter to Denver Great Hall directing it to immediately clean up and restore the damage caused by the fire, saying it was their responsibility since the unsafe work practices were a violation of the Development Agreement.

It went on to say that it has brought up the damage at every weekly meeting since the incident. The letter goes on to claim that the developer waited 28 days to begin the clean-up. However, the escalators are still out of commission for passengers.

The letter also accuses Denver Great Hall of continuing to, "Engage in unsafe and unprofessional construction practices that put its workers and airport passengers at risk."

On Tuesday, airport staff say they observed an operational escalator pit open, which allowed demolition debris to fall in while the traveling public was using it, which it says raises serious safety concerns.

The letter says DIA is, "Deeply concerned that another incident may occur that endangers the traveling public."

Airport officials said demolition work to repair escalators damaged by the fire weren't in accordance with safety standards and that more violations "may result in termination of this Agreement for Persistent Developer Breach," according to the letter.

In a second letter to the CEO of Denver Great Hall that was also sent on Wednesday, DIA claimed the developer is intentionally refusing to remove some temporary walls and that it is affecting business at the airport.

The letter says that work around two domestic baggage claim carousels started on January 30 and was supposed to take 17.5 weeks to complete.

That work was finished on June 3, however the letter says, "Developer has refused to remove the McCain Walls surrounding the baggage carousels with no reasonable explanation for such refusal."

Airport officials sent a written request that same day to ask for the walls to be removed.

The letter says it has been 25 weeks since the carousels were closed, which is seven weeks longer than expected. It also said that these carousels are up during the busiest travel time of the year when it is experiencing record numbers of passenger traffic. The carousels are used by the airports largest airline carrier.

"Every day that the McCain Walls remain standing, this disruption to airport activities continues to unnecessarily prolong the strain on airport operations and the traveling public," the letter said.

The letter ended by accusing Denver Great Hall of intentionally refusing to remove the McCain Walls and purposefully and knowingly interfering with airport activities. It said it the action continues, it could result in the termination of the agreement between the two.

Denver Great Hall responded to the airport's letter on Thursday, disagreeing with the accusations.

“We are disappointed by -- and completely disagree with -- the mischaracterizations and false allegations made in these letters. We have complied with all aspects of the Development Agreement, and are fully committed to continuing to ensure best practices in both safety and diversity," said Alana Watkins, a spokesperson for Greta Hall Partners, in a statement. "We are addressing these allegations directly with DEN and will continue to meet our obligations under the Agreement in order to deliver the project, which we believe is in the best interest of all parties.”

The airport, in a statement Friday afternoon, said it would continue "to work through a number of issues on the Great Hall Project but areas which we will not compromise on are safety and quality."

"We have a responsibility to protect our passengers and employees and when any of our contractors take actions that we believe are unsafe, we address them immediately," the statement said.

Construction on The Great Hall was already facing a months-long delay, after the contractors discovered weak concrete on the main floor earlier this year. Airport officials and the contracting company were holding mediation sessions this summer, with hopes to get the project back on track, the Denver Post reported.