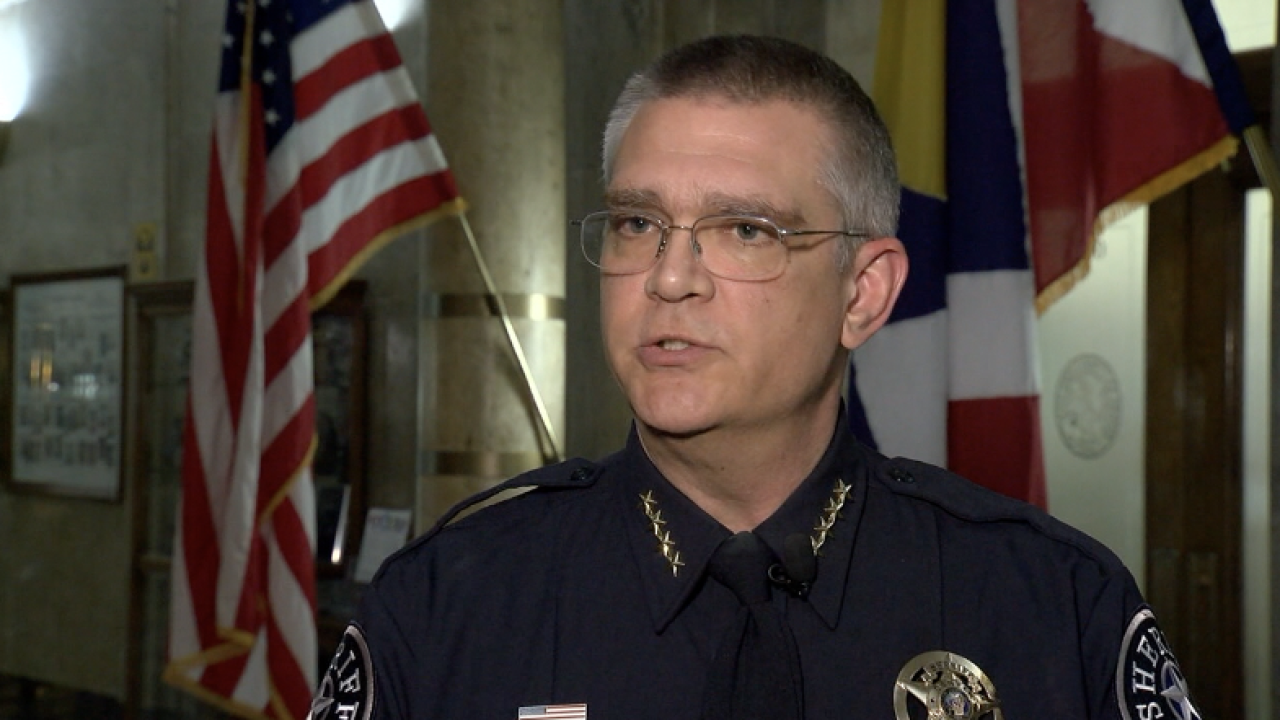 Copyright 2019 Scripps Media, Inc. All rights reserved. This material may not be published, broadcast, rewritten, or redistributed.
Denver7
Sheriff Patrick Firman is expected to resign within the next two weeks after four years on the job and as new city council members are putting pressure on him after a series of scandals, multiple sources tell Denver7.

DENVER – Sheriff Patrick Firman is expected to announce his resignation Thursday but will not step down immediately, two high-ranking sources with knowledge of the plan confirmed to Denver7 Wednesday evening.

A statement sent by city officials not long after not only confirmed the information provided by the high-ranking sources, but also revealed he will leave his post on Oct. 14.

“Sheriff Firman has weathered criticism, fair and unfair, over his tenure at the department, but he remained dedicated his personal commitment to corrections reform, equity, ethical leadership and a passion for serving the people of Denver,” said Denver Mayor Michael Hancock in a statement. “He is a loyal and dedicated public servant, and a compassionate and humane man working in an environment where both qualities are sorely needed.”

Denver7 reported last Friday Firman was expected to resign in the coming weeks after pressure from new city councilmembers calling for resignation following a series of scandals. His ouster was first reported by the Colorado Independent.

Among the things that are expected to lead to his resignation is a lawsuit filed by female Denver Sheriff Department deputies who claim that they were subjected to crass remarks and behavior by male inmates, which the city council is expected to vote on whether to approve a $1.5 million settlement next week.

A separate lawsuit filed by a woman forced to give birth alone in a Denver jail cell and a host of other incidents and issues within the department – which operates Denver’s jails – over the past four years put Firman in jeopardy, the sources said.

In the prepared statement sent by city officials, Firman said it had been an honor to serve with the men and woman of the Denver Sheriff’s Department. He also wished them the best “as they continue to move forward.”

Firman, who worked in corrections in Illinois prior to coming to Denver, was appointed in 2015 and sworn-in in October of that year amid plenty of issues at the department at the time – from excessive force cases to jail mismanagement.

“We have the roadmap in hand to fix that which needs fixing,” Mayor Michael Hancock said when he announced Firman’s appointment.

"My legacy in the department is somebody who has come in and listened to the people, listened to the employees. Listened to the community. Engaged everybody in the process and made the place a better place,” Firman said following his swearing in ceremony.

A month later, an inmate at the jail, Michael Marshall, was killed at the hands of deputies. The city went on to settle with his family for $4.6 million while more excessive force allegations poured in.

In early 2018, Denver7 reported that deputies had racked up more than $11 million in overtime costs over 10 months in 2017 – another issue that plagued the department prior to Firman’s hiring.

In January 2018, the Denver auditor said the department had made progress in reforming itself but said there was still more work to be done because there had been no decrease in the number of use-of-force incidents between 2014 and 2016.

In March 2018, three DSD deputies were reassigned after they released an undocumented man who was suspected of killing another man in a hit-and-run crash before telling U.S. Immigration and Customs Enforcement.
And this past March, the city auditor again reported that the department had many issues regarding the safety of inmates and deputies.

And this past March, the city auditor again reported that the department had many issues regarding the safety of inmates and deputies.

“The sheriff department needs to take action to better protect the public, its staff, and the inmates,” Denver Auditor Timothy M. O’Brien said at the time. “This starts with having a comprehensive, clear, and consistent plan to respond to incidents and prevent them from happening.”

Last month, a woman who gave birth inside a Denver jail cell sued the city, alleging deputies and nurses ignored her pleas for help. DSD said in a statement to Denver7 at the time that it had changed its policies to be sure pregnant inmates were transported to hospital immediately no matter the stage of their labor.

Troy Riggs, the executive director of Denver’s Department of Public Safety, will hold a news conference regarding Firman’s resignation at 1:30 p.m. Thursday in the lobby of the Denver Crime Lab.