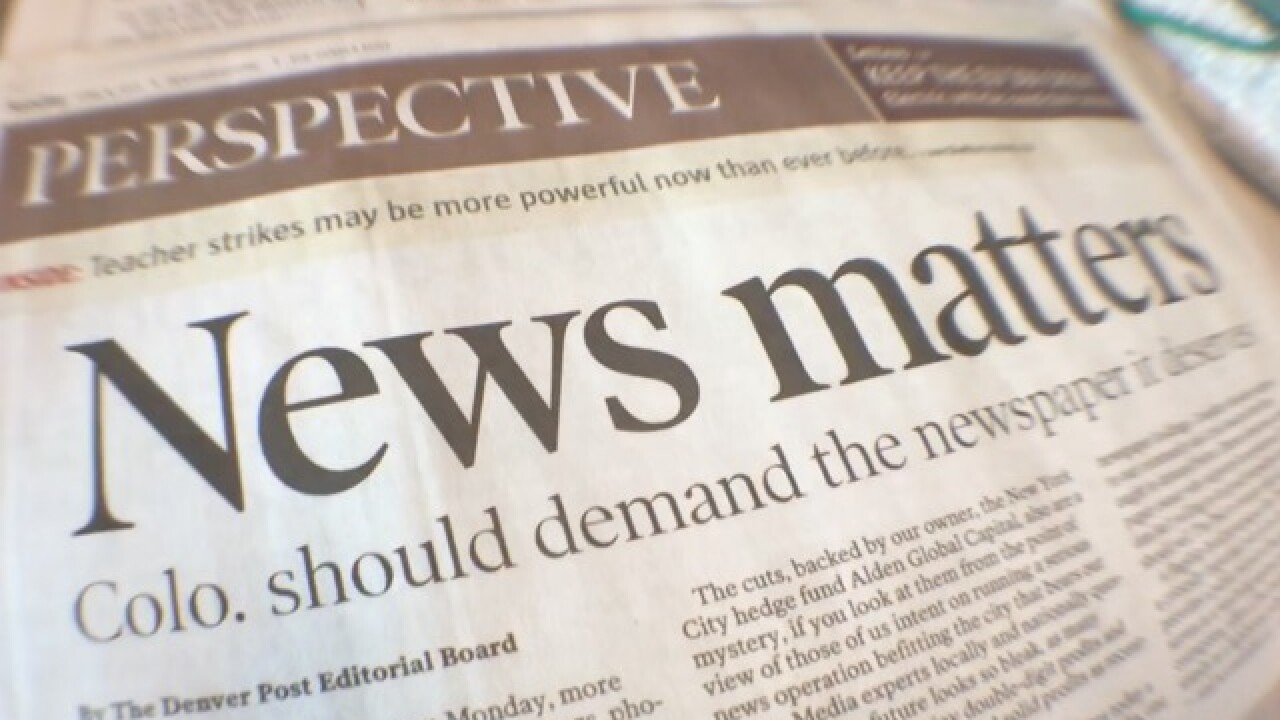 DENVER — Denver Post staff members are in open rebellion against the company that owns them.

On Sunday, the Perspectives section of the newspaper featured numerous op-eds written by staff members about the cuts the 125-year-old newspaper is facing.

Many of those columns called for Alden Global Capital, a New York-based hedge fund that runs about 90 newspapers across the country, to sell the Denver Post.

The demands come as about 30 people are being laid off on Monday and after years of the newspaper shedding positions.

The Post is run through the hedge fund’s subsidiary, Digital First Media. It took over ownership in 2010 after the Post’s former parent company, MediaNews Group, went bankrupt.

Currently, the Post has fewer than 100 staffers. However, that number will drop below 70 by the end of Monday. The cuts follow a trend the Post and numerous other newspapers nationwide have experienced in recent years.

"The post started downsizing in the mid-2000s and it really hasn’t stopped since then," said Jeff Roberts, the executive director of the Colorado Freedom of Information Coalition.

"My job is part of an earlier round of cuts. There have been many, many rounds of cuts at the Post," Roberts said.

The columns within the Sunday Perspective section have titles like, “Love us or hate us, you’ll miss us when we’re gone,” or, “CO. should demand the newspaper it deserves,” or, “Stories that might not get told.”

Roberts was also invited to write a piece for the section. It was called, "The important of investigative journalism," and it spoke about the important of trained journalists and the cost to the community when these jobs are lost.

"We need trained journalists who are able to, if someone gives them a tip about something, know how to look into that," Roberts said. "Who does that if there are no journalists left?"

Roberts now dedicates his time at the Freedom of Information Coalition to training future journalists how to find the facts they need to support their stories.

He says a loss at the Denver Post is a loss to the entire community.

"When we diminish this whole ecosystem of journalism I think our community and our state suffers for that," Roberts said.

The editor of the Perspectives section, Chuck Plunkett, didn’t tell chief editor Lee Ann Colacioppo he was planning on doing this. He also didn’t give the owners a heads up before publishing. He just did it.

"Chuck is risking his job by doing what he did," Roberts said. "I think it’s probably unprecedented. I’ve never heard of anything like that. It was very extraordinary and very courageous on the part of Chuck Plunkett, the editorial page editor, and the other people that were involved in this."

Plunkett told Denver7 Monday it was strange to be put in the national media conversation.

“A local paper like the Denver Post – whether it is or not – ought to be a public institution that is serving a watchdog role, that’s serving an investigative role, that’s speaking truth to power, that’s providing a voice to the voiceless," Plunkett added. "Just doing the kind of things that help a community be a community.”

Plunkett also said that he felt he was in a unique position to stand up for the news staff despite being on the editorial side of the paper.

“Someone needs to standup and say something, and even if it means we have to call out our own company, our own owners," he said. "But if you think about it, it’s not that out of the question. We run letters to the editor, we run columns that are critical of what the Denver Post does.”

According to the New York Times, Colacioppo spoke with Digital First Media about it afterward and they decided not to fire Plunkett.

“It’s risky, there are a big potential pitfalls in a strategy like that," Plunkett told Denver7. "But it’s the right thing to do, so that’s what we’re going to do.”

Mayor Michael Hancock also defended the move. In a statement he said, “Denver is so proud of our flagship newspaper for speaking out. The Denver Post said it best — they are necessary to this ‘grand democratic experiment,’ especially at a time when the press and facts are under constant attack by the White House. For a New York hedge fund to treat our paper like any old business and not a critical member of our community is offensive. We urge the owners to rethink their business strategy or get out of the news business. Denver stands with our paper and stands ready to be part of the solution that supports local journalism and saves the 125-year-old Voice of the Rocky Mountain Empire.”

The Post has taken several big steps to try to save itself. Earlier this year, the Post moved away from its building in downtown Denver to one in Adams County as a cost-cutting measure. It also put a paywall up so that people reading its articles online will have to pay for the content.

But none of it seems to be enough to keep the newspaper from shedding jobs.

"Overall it was a very good, very courageous move on the part the Post and we’ll see if it makes any difference to the owner. I worry that this owner will not care," Roberts said.

Across the country, Alden Global Capital has faced steep criticism and even lawsuits for how it’s running Digital First Media and the newspapers it owns. One lawsuit accuses the hedge fund of siphoning off hundreds of millions of dollars from newspapers toward other things.

Some of the Post’s staff are also taking to social media to have their opinions heard.

John Wenzel wrote: The @denverpost is being murdered by its owners. It's the most heartbreaking, panic-inducing thing I've seen in 20-plus years of writing for daily newspapers. We need a new owner, or we are going to get shut down (and soon) http://dpo.st/2qdgqbw  @AldenExposed #AldenExposed

Meanwhile, Aaron Ontiveroz tweeted out a picture of the visual staff still left at the newspaper after the, “layoff bloodbath.”

Denver7 reached out to Colacioppo for an interview but she said Monday she’s focusing on her staff, a staff that’s continually becoming fewer and fewer.