“We’re looking at all the options right now,” Hancock said. 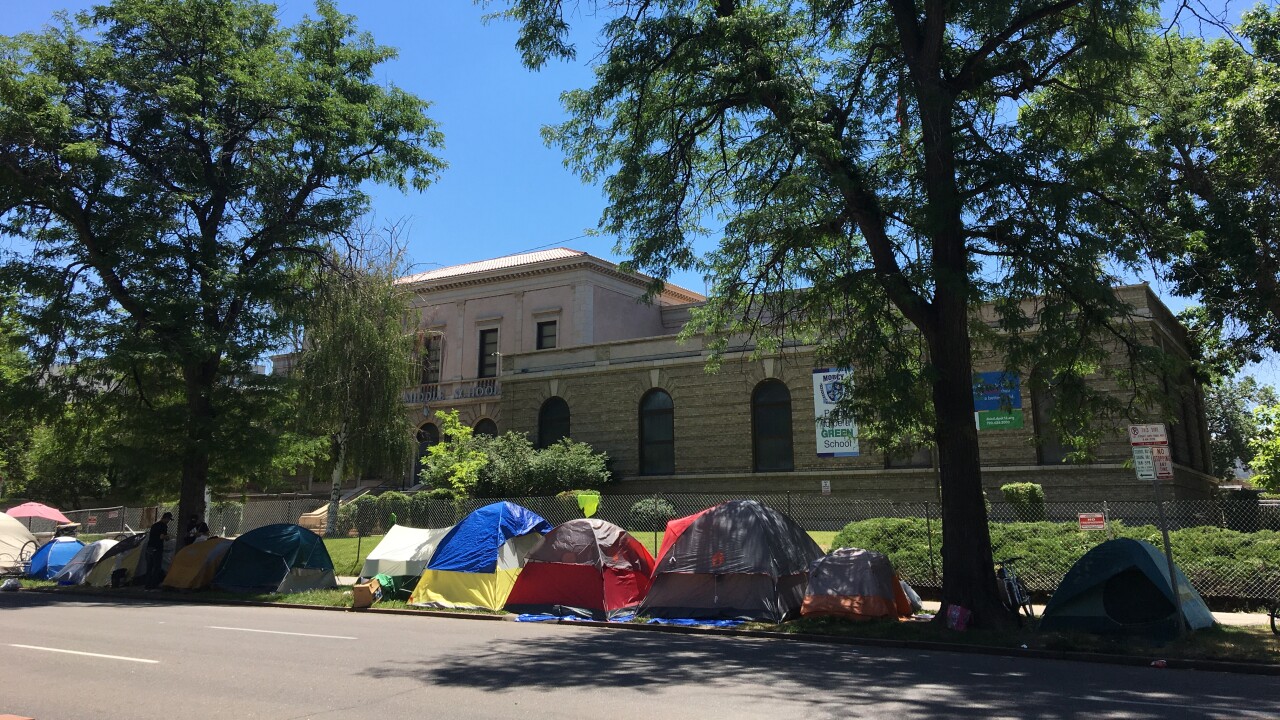 DENVER – Mayor Michael Hancock said Wednesday that the city was looking at “all options,” including a possible sanctioned campsite, for people in Denver experiencing homelessness as he promised upcoming sweeps at encampments across the city that he and public health officials say have become public health hazards.

Protesters shouted various slogans at Hancock during his 10:30 a.m. news conference through the doors at the city and county building calling for him to stop homeless sweeps, which advocates had said were planned for Wednesday morning but did not occur at the camp near Morey Middle School in Capitol Hill.

Hancock said there was no timeline for that particular camp to be cleaned up, or for others around the city that have seemed to grow in recent weeks, such as the one at Civic Center park.

But he and other city officials said that some camps – though not all – have “spiraled,” as Hancock put it, into being public health threats both for the people living in the camps and for the housed people living nearby them.

“You cannot try to guard against one virus or a potential challenge while allowing others to exist. That’s the balance we have to try to walk,” Hancock said. “Some encampments have spiraled into acute public health threats.”

Hancock said that city workers have found feces, needles and other “unsanitary” conditions at some of the homeless camps and that it was the city’s obligation to “abate them.”

One of the camps that had lined the sidewalks of Saint John’s Cathedral and the Episcopal Church in Colorado, which sit between 13th and 14th Avenues and Clarkson and Washington streets in Capitol Hill, was cleared out and cleaned several weeks ago, and fencing was put up that remained there on Wednesday.

But some of those people moved just a block over to the Morey Middle School property, irking some people who live in the area. City of Denver spokesperson Nancy Kuhn said Tuesday that the Morey site was among the camps seeing “unsafe, unhealthy, and unclean conditions.”

Hancock said Wednesday that city workers with the public health and public works departments had asked unhoused people there to leave so the location could be cleaned.

Denver Department of Public Health and Environment Executive Director Bob McDonald said that he had talked with officials from the CDC about balancing public health threats in the encampments from both COVID-19 and other illnesses.

Hancock said, “We’re going to do it,” in regard to the planned sweeps and that the city was “looking at various options and strategies” about how to best clean the camps and work with the residents there.

Britta Fisher, Denver’s chief housing officer, said that the city has been among the leaders in the country in providing auxiliary shelter to people experiencing homelessness during COVID-19. She said the city has had more than 1,000 beds at the National Western Complex and Denver Coliseum that have been utilized and more contracted beds and under-construction beds planned in coming months.

“Is that something? Absolutely. Is that everything? No,” she said.

Advocates for people experiencing homelessness met with Hancock after Wednesday’s news conference but there was no clear resolution in place. Some have called for more portable toilets and hygiene facilities to be stood up near the newer camps, as they have been in other parts of the city.

Some have also called for Denver to establish a sanctioned campsite for people experiencing homelessness, like have popped up in other cities both before and during the pandemic, which Hancock said he was looking into whether they have been successful in other places.

“We’re looking at all the options right now,” he said.

Hancock said that officials were not trying to demonize the homeless population but to keep them from contracting or spreading the coronavirus or other disease.

“It’s easy to demonize the government when we are trying to do what we can to create balance and help folks. We are not trying to hurt our neighbors who are experiencing homelessness,” he said. “If we are able to help them access services, there is a greater probability they can move to a more stable lifestyle. I believe in my heart we have to continue to do that.”