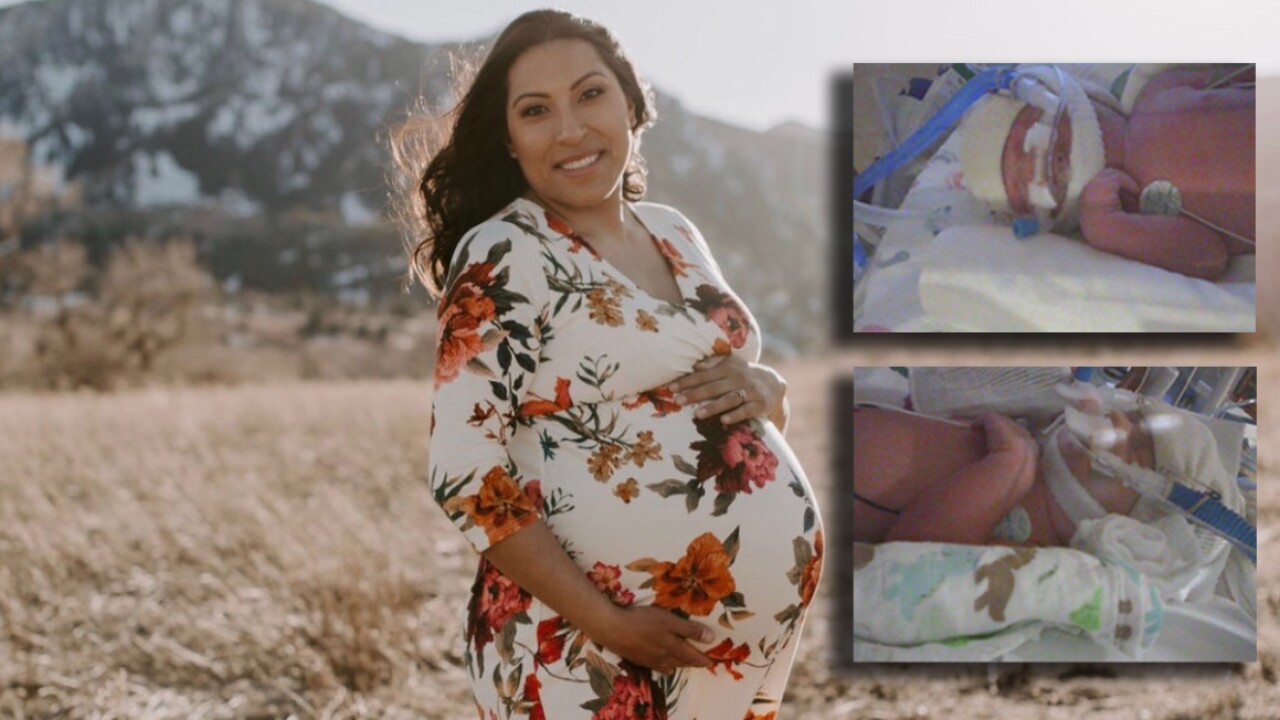 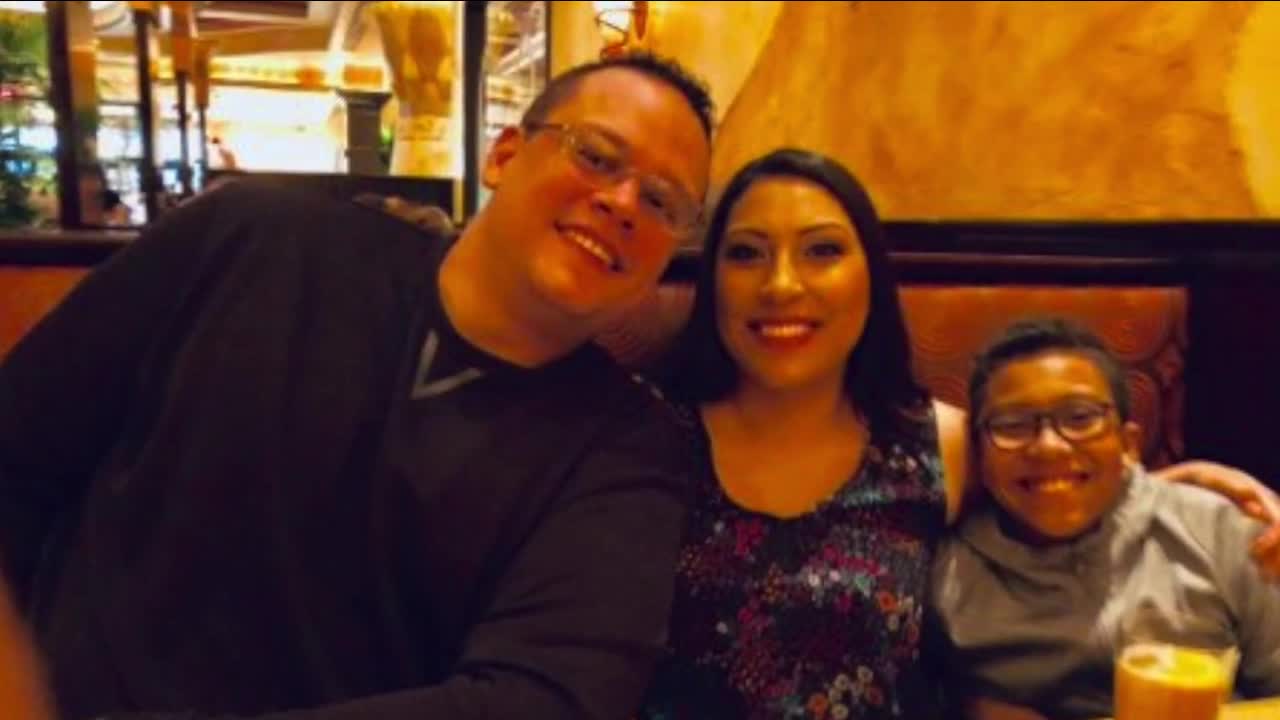 UPDATE | April 20 — Zach and Cat Garcia, who both tested positive for COVID-19 previously, were able to bring their premature twin boys, who were born March 31, home on April 19. It was also the first time they saw their babies in person. The whole family is healthy, though Cat and the newborns remain on oxygen for the time being.

UPDATE | April 13 — The Garcia family fully moved into their new home on Friday, April 10. Cat is continuing to recover at home and Zach, who ultimately also tested positive for COVID-19, is also recovering at home. The twins are making good progress in the NICU, according to the family. They can see the boys on a livestream.

UPDATE | April 5 — On April 5, Cat Garcia was released from the hospital and is recovering at home. She is still using supplemental oxygen. Her newborn twins will remain at the hospital until both Cat and Zach Garcia test negative for COVID-19.

DENVER — A Denver couple welcomed twins into the world on Tuesday, but under circumstances beyond their wildest nightmares.

These days should be filled with joy and wonder for new parents Zach and Cat Garcia. Instead, Cat is continuing to recover not only from an emergency C-section, but also the novel coronavirus and pneumonia. Meanwhile, Zach is awaiting the results of his own COVID-19 test, though he said his doctors are confident he has it too. And the babies are in the NICU, since they were born premature.

To make matters more stressful, the family is moving to a new home in two weeks. But because Cat tested positive and Zach is exhibiting symptoms, moving companies will not help them.

It’s a situation Zach said he never thought they’d find themselves in.

“Before any of us contracted this, I didn’t think it was a big deal,” he said. “I was one of those people.”

He shrugged it off, laughed about it. It was a stupid virus, he said he remembered thinking.

“Not even a couple days later — we have coronavirus,” he said.

And now, what he scoffed at before has turned his world upside down.

His symptoms began on March 19 as he drove home from the Denver International Airport, where he works for TSA. He said he had a fever and felt sweaty and weak. His 13-year-old stepson was sick for a few days, but then recovered. Then, Cat started to show symptoms, though hers were much worse than Zach's, he said.

While Zach had a slight cough off and on, her cough was violent.

He took her to Saint Joseph Hospital, where she tested positive for COVID-19 and pneumonia. After three nights in the hospital, she was moved to the ICU.

Between the twins and the coronavirus, her lungs weren’t able to expand properly, and she was often short of breath, doctors explained to Zach.

Doctors decided they needed to get the twins out then.

“The babies had to come out when they weren’t ready, strictly because of the virus, nothing else,” Zach said. “She had no contractions. No signs of going into labor.”

Doctors performed an emergency C-section on Tuesday and the twins — without any contact with their mother — were whisked away to the NICU. Doctors couldn’t risk Cat spreading the virus to the newborns, who already needed extra care since they were premature.

Because Zach couldn’t be present for the birth, nurses texted him pictures. He said he received the photos as he arrived at Aurora Centrepoint to get tested for the coronavirus.

“I was seeing my newborn sons while I was getting COVID-19 testing, with that thing stuck up my nose,” he said.

Cat’s doctor called shortly after to tell Zach that mother and babies were doing OK.

The babies were born premature at 33 weeks, six days, and both weighed more than 6 pounds.

Doctors told him they must have gotten it from their dad, who’s about 300 pounds and stands about 6 feet, 8 inches tall, Zach said.

As frustrating as it was to not be present for that special moment, he said he appreciates all that the nurses and doctors have done for Cat.

“Saint Josephs is doing amazing,” he said. “Hats off to them. They’re really taking care of my babies and my wife and doing the best they can. There are a lot of unknowns, but they’ve been very professional.”

Zach said Cat is still short of breath but is improving slightly. She still needs supplemental oxygen and pain management help from the C-setcion. Zach still hasn’t seen her since he brought her to the hospital and neither have seen the twins outside of a few pictures from nurses and a live feed they set up for the couple to watch the babies.

He said they both fear that the twins may test positive for the virus.

“We don’t know what that means if they are,” Zach said.

They have lots of other questions too. Zach said they don’t know if the virus is in Cat’s breast milk. Their doctor recommended giving the babies the milk because it’s filled with antibodies that can fight off germs and disease and strengthen their immune systems.

“But it makes me uneasy that they don’t know,” he said. “It’s not their fault I’m stressed about it. They’re still doing tests.”

While he awaits the results of his test, and Cat and the babies recover in the hospital, he’s still trying to figure out how he’s supposed to move everything in their condo to another home without a truck and while he’s supposed to be quarantined. He said they have until April 14 to move out.

He said they have “humble salaries” and just spent thousands of dollars on closing costs for the house.

Throughout this exhausting time — both spiritually and emotionally, Zach said — they’ve received what he calls a “huge blessing” from the community.

Zach’s sister-in-law, Jennifer Garcia, said the family had been trying to help Zach and Cat as best they could, but realized it wasn’t enough. Between the medical bills, housing costs and items required to care for two newborns — Cat wasn’t able to hold a baby shower due to previous social distancing rules — they wanted to do more.

Jennifer, who lives in Asheville, North Carolina, created a GoFundMe on Tuesday asking for $500 for Zach and Cat.

“It became bigger than just us,” Jennifer said.

She saw donations come in faster than she expected. People cared and that was humbling, she said. So, she made the goal amount more realistic, taking into account what the family actually needed — the medical bills for Cat’s COVID-19 treatment, the NICU expenses and help with the new house. She bumped it up to $30,000.

As for now, as they continue to recover and get back on stable footing, they’re looking forward to the day they can finally hold their baby boys in their arms.

As for now, as they continue to recover and get back on stable footing, they’re looking forward to the day they can finally hold their baby boys in their arms.