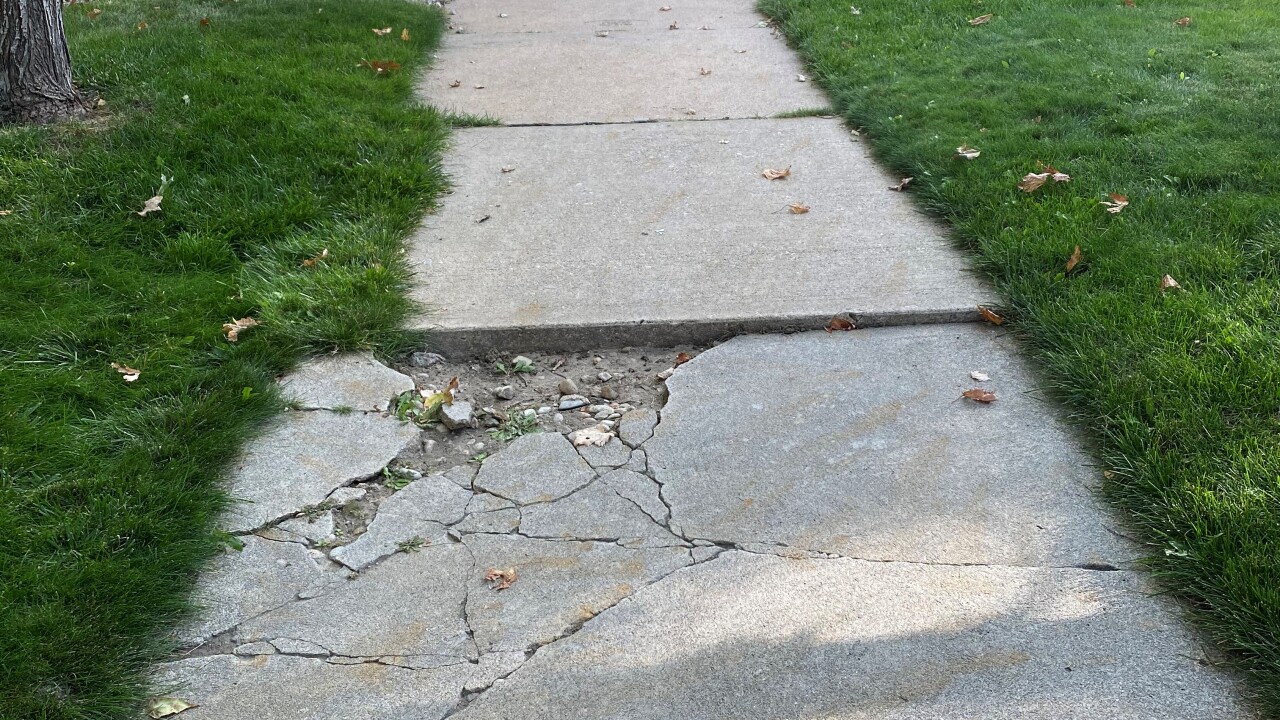 DENVER — The Denver auditor found that the city’s Neighborhood Sidewalk Repair Program is not only decades behind schedule, but also doesn’t ensure accessibility for everybody.

Denver Auditor Timothy M. O’Brien, CPA, said “city leaders chose not to require compliance with Americans with Disabilities Act guidance in its rules and regulations.” They also “severely underestimated” how many sidewalks would require repairs, and how many private homeowners would be deemed responsible for the restorations, he said.

“Public spaces like sidewalks should be accessible for everyone,” O’Brien said. “I don’t think this program is benefiting anyone right now. Neither the homeowners adjacent to the sidewalks nor people with varying mobility needs are served by the way the program is currently setup.”

In 2017, City Council established a fund to kick-start the program — which was designed by the Department of Transportation & Infrastructure in 2018 — to proactively address uneven and damaged sidewalks. These repairs have been the responsibility of the homeowner of the property since the 1950s in Denver.

The program was supposed to divide the city into 11 regions, prioritizing the areas where car ownership was low, the rate of people with disabilities was high, and most of the sidewalks were close to public transit or schools. Program managers planned to complete one region each year.

However, Auditor O’Brien found that the first region is still less than 25% complete. And some of the sidewalks that have already been repaired weren’t done so to comply with ADA requirements.

About 80% of sidewalks in the first region have required repairs so far, which is about six times more than what department managers estimated. Of those cases, homeowners were responsible for 80% of the repairs — double what the department predicted. These delays resulted in “unachievable timelines for staff and incorrect expectations for residents,” according to O’Brien.

City administrators estimate that it will take more than 50 years to complete the program.

“At the current rate, by the time the city finishes inspecting every region, the first regions will be long past due for repairs all over again,” O’Brien said.

In addition to the delay, O’Brien said the rules and regulations for the program weren’t designed for compliance with ADA standards for accessible routes.

According to O’Brien, that includes the following, which all create mobility problems for those with physical disabilities, as well as seniors and parents pushing strollers:

After a walking tour with residents who have mobility challenges, O’Brien said he could see how some people would be forced into the street to avoid the damage sidewalks.

O’Brien said when asked, DOTI “could not provide a reasoning for their rules and regulations not aligning with ADA standards. They told our audit team the decision was made by previous managers. They said the decision was likely made to keep homeowners’ costs as low as possible.”

In addition, O’Brien said he found that the city doesn’t offer affordability options to all residents who would have to pay for the repairs from their own pockets.

To avoid overburdening residents with the costs, the department put the program on hiatus in May with plans to resume in July. They also explored options to speed up the progress, such as hiring more inspectors, altering the funding, expanding affordability options and even shutting down the whole program.

O’Brien said this audit doesn’t mean the city should give up on the program, however difficult it is.

“Instead, I hope the city will use our findings and recommendations to get this important program back on track,” he said.

The auditor’s recommendations include:

The Department of Transportation & Infrastructure agreed to all of the auditor’s recommendations.