Denver, attorneys for protesters come to agreement to restrict less-lethal force by officers 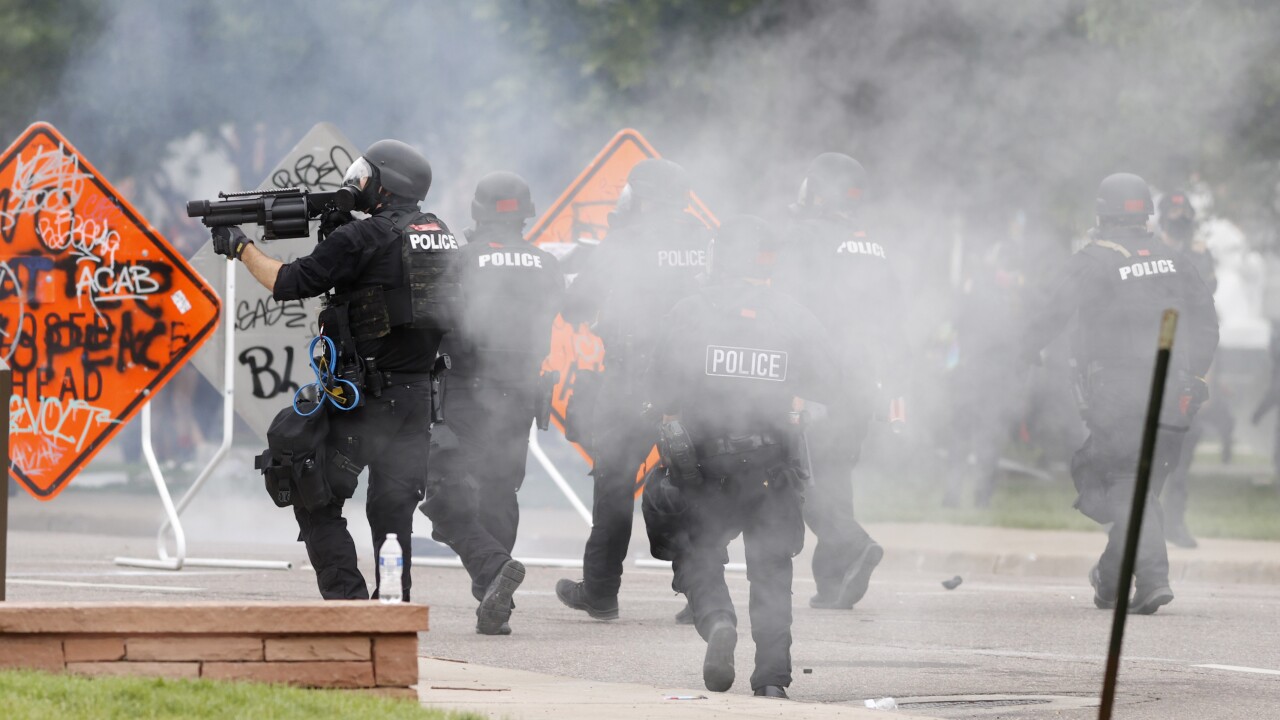 DENVER – The city of Denver and attorneys for four protesters who sued over police officers’ use of force during the early days of the George Floyd protests here have come to a stipulated agreement on what force can be used by officers and when.

The resolution of some of the claims from the plaintiffs in the agreement comes three weeks after they first filed suit, which led to a temporary restraining order that dictated what “less-lethal” munitions officers could use against protesters and under what circumstances they could be used.

The stipulated agreement, which was reached Thursday, filed Friday, and was first reported by Westword, will be in effect while the remainder of the lawsuit plays out in the U.S. District Court of Colorado.

The agreement differs slightly from the terms of the temporary restraining order issued by Judge R. Brooke Jackson, which is set to expire Friday, that came a day after the original suit was filed. It also cites the new police reform law passed in the wake of the demonstrations that used language from Judge Jackson’s original order.

Under the stipulated agreement, Denver police officers and any officers from outside agencies working on DPD’s behalf will be prohibited from shooting non- or “less-lethal” munitions indiscriminately into a crowd, and at anyone’s head, pelvis or back.

Officers will also only be able to use pepper spray and tear gas, or other chemical agents, after they order protesters to disperse and give them time to do so.

Denver police officers will not be able to use any chemical agents or non- or less-lethal munitions unless a sergeant or higher-ranked officer orders their use – slightly different than the temporary restraining order, which required a lieutenant or higher to make the order – and the ranking officer would only be able to authorize such force in response to specific acts of violence or property destruction they have personally witnessed.

There is, however, a contingency for those weapons to be used if a sergeant “could not be immediately present and delay would be unreasonable.”

That language came from the law changes contained in Senate Bill 217, which Gov. Jared Polis signed into law a week ago.

Also stemming from the law in the stipulated agreement is a requirement that all officers deployed or engaged in the demonstrations “must have their body-worn cameras recording any and all acts of confrontation between police officers and others” and that officers not intentionally obstruct their camera.

Officers from outside agencies brought in to help Denver police with any protests will not be allowed to use any weapon that Denver does not allow its officers to use and will be forced to comply with the new Colorado law.

Earlier in the week, both sides had agreed to give the city a 14-day extension to respond to the original claims in the plaintiffs’ lawsuit. Denver will now have to file a response by the end of the day July 9.

But the city also faces another lawsuit, filed Thursday by the ALCU of Colorado and Denver law firm Arnold & Porter on behalf of Black Lives Matter 5280 and nine protesters who were injured by less-lethal weapons.

That lawsuit alleges that the use of force by police officers injured several people attending the demonstrations and discouraged others from coming out to join, “and infringed on the rights of legal, observers, journalists, and medical personnel attempting to perform their duties at protest sites.”

The suit says that the use of various types of “less-lethal” force “infringed on protesters’ rights under the Fourth and/or Fourteenth Amendments to be free from unreasonable seizures and excessive use of force.”

The attorneys for the original class-action lawsuit have also set up a website where they are “collecting stories, videos & photos from Colorado citizens who have experienced excessive force during the Denver demonstrations,” according to the site.

An ongoing investigation by the Office of the Independent Monitor is reviewing the actions of officers toward protesters and numerous complaints filed against officers for their use of force.