DCSD Board members asked to resign 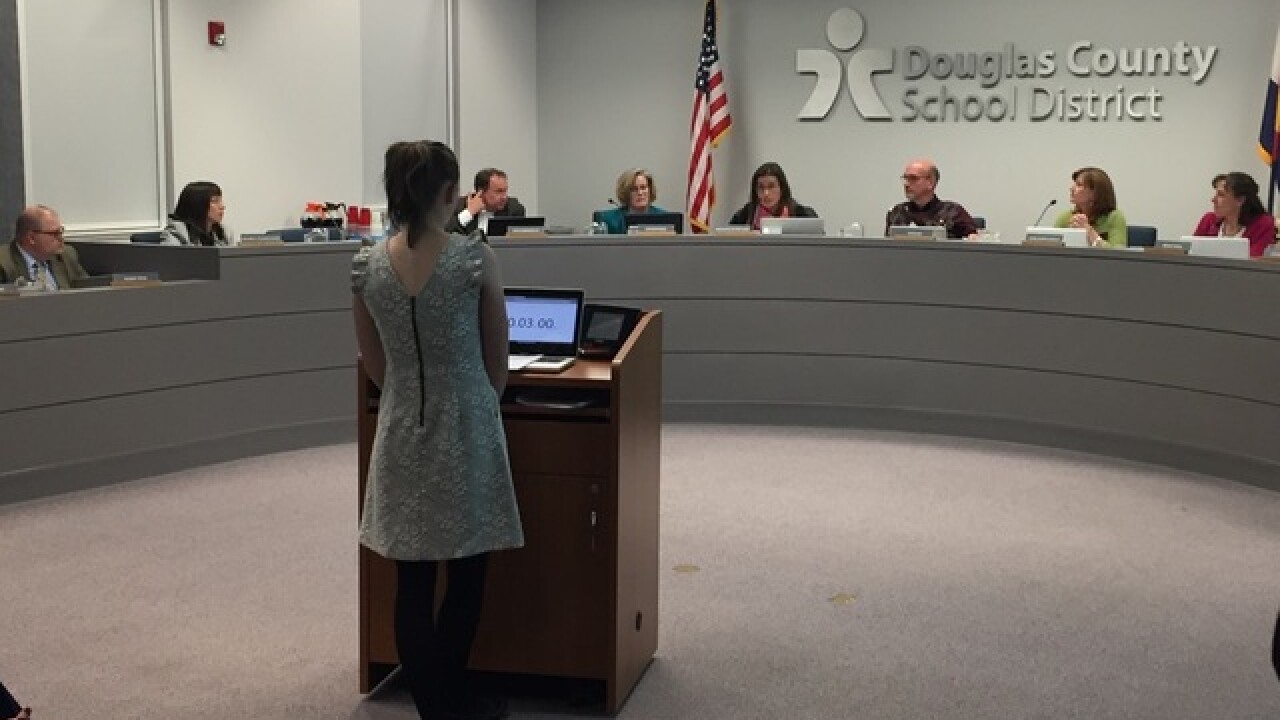 Grace Davis asked for the resignation of Board President Meghann Silverthorn and Director Judy Reynolds after Davis said she was bullied and intimidated in a closed-door meeting with the two board members before the protest on March 9, 2016.

Davis recorded the hour and a half meeting with the board members.

Only Denver7 obtained a copy of those recordings. You can listen to it here.

In the recordings, Grace Davis explained what prompted her to organize the protest and her concern for teachers in the district who appear unhappy and appear to be leaving for other districts in droves.

Davis said she started the protest to give a voice to teachers who may feel afraid to speak their minds.

“I think a lot of teachers are afraid to talk about it because they think their job is at risk,” said Davis during the recording.

Silverthorn spoke with Denver7 ahead of the April 19 school board meeting.

“I find that unfortunate that she believes that our quest to find out more about what our concerns were rose to that level, I find that having those conversations was open and healthy and honest," said Silverthorn.

The parents of Davis tell Denver7 they were never informed that the two board members were meeting with their daughter.

Davis’ parents wrote a letter to the board asking for the resignation of Silverthorn and Reynolds, questioning the ethics of the meeting with their daughter.

“They did not have our permission to meet in private, or any other way, with our daughter and failed to meet the school security requirements in that regard. Of greater concern, are the extremely inappropriate actions that were directed at our daughter during this meeting,” said Davis’ parents in the letter.

After Davis addressed the board at Tuesday’s meeting, telling them she felt threatened and bullied, there was turmoil among the board. Director Vogel made a motion with a second my Ann-Marie Lemieux to ask Dir. Silverthorn and Dir. Reynolds to resign their positions.

A board argument over procedure ended with the Board’s attorney asking for an independent, third-party review of the meeting between the board members and Davis, with a recommendation for disciplinary action to follow.

It’s a motion the board couldn’t resolve before the meeting moved forward at the direction of Dir. Silverthorn.

You can read the full text of the letters sent by Davis’ parents to the school board here:

"We are sending this letter requesting resolution and closure for the following issue:

"On Friday, March 4th, Mrs. Silverthorn and Mrs. Reynolds met with our daughter, Grace Davis, at Ponderosa High School regarding the protest she was planning. They did not have our permission to meet in private, or any other way, with our daughter and failed to meet the school security requirements in that regard. Of greater concern, are the extremely inappropriate actions that were directed at our daughter during this meeting.  We remain incredibly disappointed and shocked that adults who are serving on a Board of Education would behave in this manner towards anyone, especially a child.

"Grace attempted to address her feelings of being intimidated and bullied by sending an email to David Ray. This email was shared with Silverthorn and Reynolds. On Friday, March 11th, Mrs. Silverthorn and Mrs. Reynolds met with me regarding the issues that Grace brought up in her letter and her wishes for them both to resign. At that time I was hopeful that there would be resolution, but Mrs. Silverthorn chose to contact the media and continue to speak disparagingly about Grace and our meeting.   This included a completely false accusation that Grace had been encouraged and supported by the teacher’s union.

"There appears to be no accountability for unethical behavior by a school board member.  It is inconceivable that school board members can violate their own policies without consequence. Prevention of Bullying Policy (JICB) states, “The Board of Education recognizes the negative impact that bullying has on student health, welfare, and safety and on the learning environment at school.

"The policy goes on to state that the consequence for this behavior “may include suspension, expulsion, and/or classroom removal.  A recently passed Board resolution, 'Condemning the Intimidation and Mistreatment of Staff' states, 'That anyone found in violation of the policy be subjected to discipline up to the removal from their position.'

"At the Board Meeting on February 2nd, a resolution was passed condemning the actions of an individual who sent a disparaging tweet to a teacher and who was supposedly associated with the teacher’s union.  During this meeting Board members demanded termination of the union leadership because of acts of “unprofessionalism” and “failure of leadership.”   Given that our daughter experienced these same acts of unprofessionalism and reprehensible remarks by both Mrs. Silverthorn and Mrs. Reynolds, we are requesting the same consequence.

"We are communicating to all Board members in order to ensure a common understanding of our request and the opportunity to listen to the meeting in which these threatening and intimidating remarks were made to our daughter.

"As stated, Mrs. Silverthorn and Mrs. Reynolds’s meeting with Grace on Friday, March 4th, was recorded. We would be willing to share this recording with any of the board members to listen to for a better understanding of our concerns about this inexcusable behavior towards Grace. Also attached is Grace’s original email to David Ray that she sent after the meeting on March 4th.  As you can see, she was greatly disturbed by the way she was treated and the threatening remarks that were made.

"We would appreciate a response no later than the day after the next Board meeting on April 19th, so that we can decide our next steps to have this issue adequately resolved.  Please let me know if you have any questions or would like access to the recording."