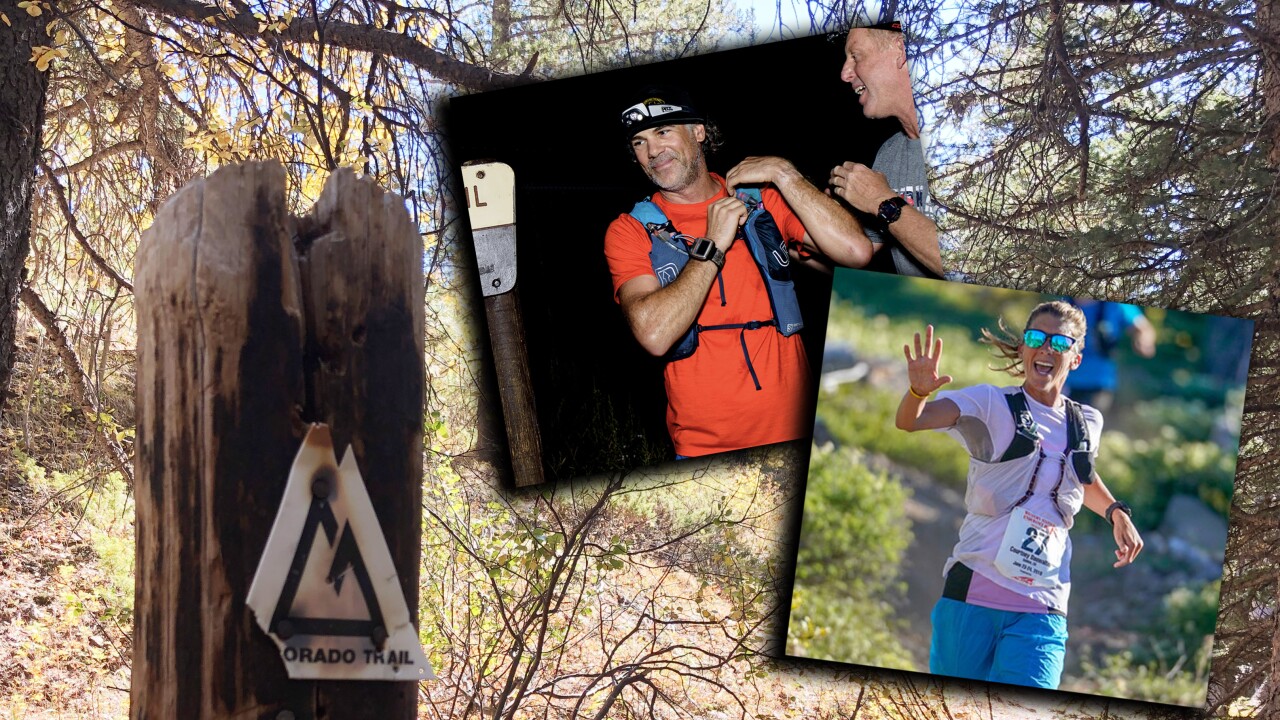 ERIE, Colo. — Records are meant to be broken.

In 2017, Bryan Williams, now 45, ran for more than a week along the trail, which took him through six wilderness areas and eight mountain ranges. After eight days and 30 minutes, he finally came to a final stop — he’d broken the record for fastest completion of the Colorado Trail from Durango to Denver.

Despite multiple attempts every summer to break it, that record still stands today.

But Dauwalter, a 35-year-old gritty runner from Golden who never seems to tire, is closing in.

She started the run on Wednesday in Durango.

“What I know of Courtney, she’s got it,” Williams said. “She’s one of the toughest female ultrarunners out there right now.”

But running in the mountains can throw challenges at even the most fit and experienced athletes. Poor weather or just one misstep can bring the whole venture to a complete standstill, Williams said.

Even so, a few years ago, knowing this full well, he was drawn to the prospect of completing the whole trail.

At that time, the record for the Colorado Trail from Durango to Denver was held by Scott Jaime of Highlands Ranch. After watching a documentary about Jaime with some friends, Williams said they started to make plans to visit the Colorado Trail more often. His friend Eric Truhe, as well as Eric’s father, Marv, invited him to run several sections of it over the next couple years.

Over the course of two summers, weekend by weekend, Eric and Williams completed the entire route. Marv crewed them along the way, bringing additional water and food, and scouting places to sleep along the trail.

“People always ask, ‘What do you guys talk about out there?’” Williams said. “But one of the topics was always, ‘Man, how did Scott (Jaime) do this? What would this look like if we were to attempt this? What could we learn from Scott? What did he do well? What would we change if we could?’”

That hesitant goal became solidified reality when he stepped onto the southern tip of the trail in October 2017.

The run itself was full of highs and lows. And a constant fear of not finishing.

“It was something I tried not to think about too much because it’s so overwhelming,” he said. “It just kind of crushes your soul to think about how much farther you have to go.”

He broke the trail down into relatively small goals — in 10 miles he’d see his crew. In half an hour he could stop to eat. In an hour, he could sleep.

At one point, his running partner Eric injured himself and Williams had to run through the night alone. While he said he enjoys the solitude of running solo, it was a lonely, long night.

“You can go from feeling on top of the world, literally — amazing views out there — to feeling like you don’t know if you can go a single step farther,” he said.

All the while, he said the entire experience was an escape from the realities of day to day life. No voicemails, no emails, no social media.

“Just being able to get out there and breathe and experience the beauty of Colorado,” he said. “You get to really embrace and appreciate the beauty that we have in our backyard. (We’re) super fortunate and it’s really cool that the Colorado Trail Foundation continues to maintain these trails and we have access to this. And it’s free. You just have to drive a little bit out of Denver and hook up with a bunch of trailheads.”

He finished the run around 5:30 a.m. on Sept. 3, 2017 in Littleton’s Waterton Canyon. Williams said some of his friends ran with him to the finish.

“I do remember thinking, ‘Alright, cool, I can sit down now. Take my shoes off,’” he said. “It was a really cool, really special, accomplishment I got to share with friends and crew. I’m a little jealous of Courtney being out there right now.”

He said he instinctually wants to keep his record, but knows fastest known times, or FKTs, are meant to be broken.

“When I set out to do it, it wasn’t anything about taking it away from somebody else,” he said. “You just want to see what you can do, right?”

He’s been watching Dauwalter’s progress, which is available on Garmin’s website, from his computer.

“I want to see what she’s got. It’s not easy,” he said. “I know what it’s going to take and from what I’ve been seeing over the last few days, she’s going for it. She’s not messing around.”

In an Instagram post from July 29, Dauwalter said this run will serve as a way for her to “test myself on a new distance. What does it feel like to run that far? I’m excited to find out! Pain Cave, here we come.”

In a post from the day she started the run, she gave a shoutout to Williams.

“Current record: 8 days, 30 minutes by Bryan Williams. Stout! Thank you, Bryan, for giving us a fun time to chase!” she wrote.

Williams said he’s cheering for her from afar.

“It’s the toughest and longest I’ve ever ran,” Williams said. “It’s pretty exciting to see what Courtney is doing out there this week. You know, I’ve literally been there and in her shoes. It’s exciting. I’m totally rooting for her.”

Williams is co-race director of the Virtual Colorado Trail Challenge, which was created as a way for athletes to find community and competition safely amid the pandemic. Anybody is welcome to join the challenge, which calls for participants to run 500 miles in three months. As of Friday afternoon, more than 700 people from the United States have joined the challenge. A portion of the proceeds will benefit the Colorado Trail Foundation, as well as a relief fund for COVID-19 first responders.