"Cow Killer" season at its apex; don't pick up these painful critters

DENVER — A deceiving and beautiful creature can be found in much of the United States, including in Colorado. A species of wasp that goes by the name of dasymutilla occidentalis, better known as the "Cow Killer" or "Red Velvet Ant" is currently at its peak of activity.

The wasps, which actually take on the appearance of ants due to the ground-dwelling nature of the females of the species, received their name due to their painful stings, which can cause excruciating pain in humans for an extended period of time, according to the Centers for Disease Control.

Humans — especially children — can be lured to pick them up due to their fuzzy, colorful bodies, but the painful sting of the female (distinct due to the lack of wings when compared to a male of the same species) should be a powerful deterrent.

"Cow Killers" are most active between late spring through early fall, as the females of the species seek out egg nests of bumble bees and other critters in order to deposit larva, which will kill the original hosts of the nest.

The species can be found in the same locations you'd find bumble bees, but frequently will occupy meadows, old fields and edges of forests.

Although the sting is dangerous, they won't actively seek out humans, so admiring the wasps at a healthy distance is recommended.

Check out how long the female stingers can grow in the CDC photo below. 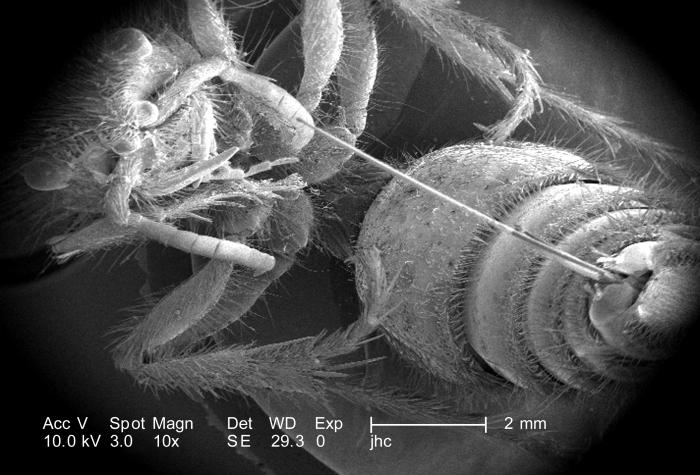