Confident Taylor Swift takes stand in trial: 'He grabbed my bare ass...I know it was him.'

No questions for Swift from own attorney 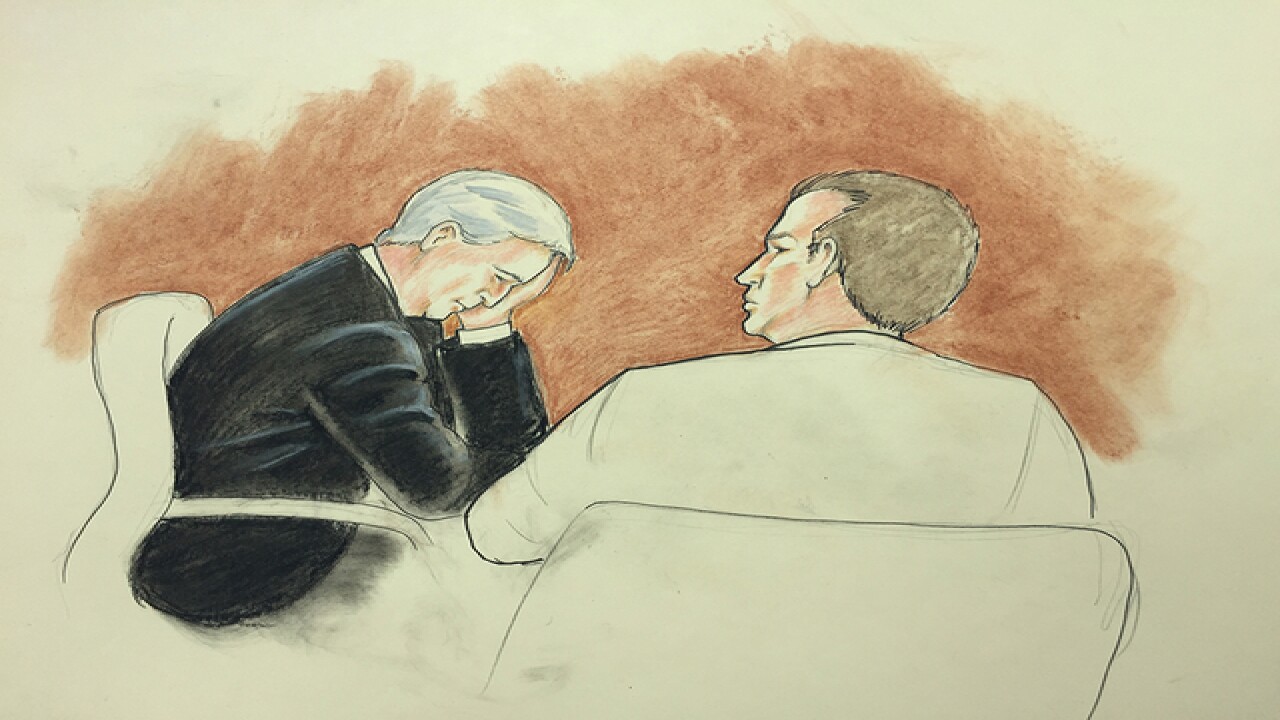 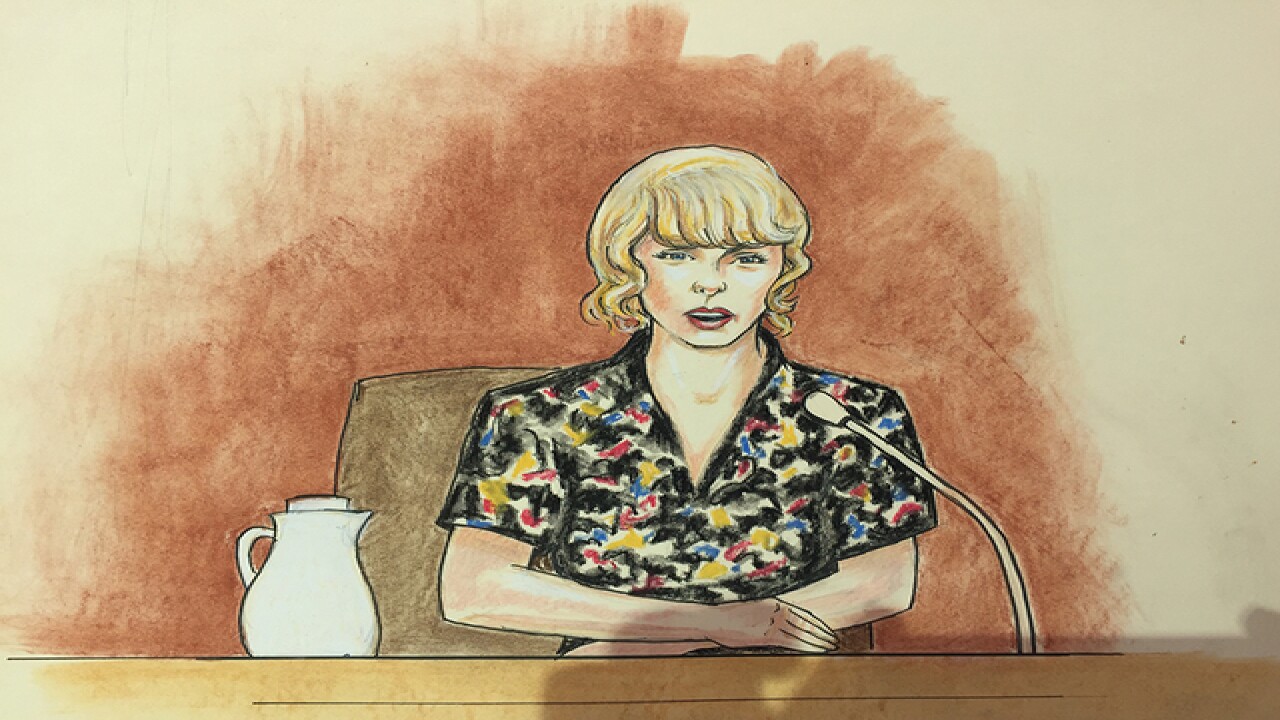 DENVER – A defiant Taylor Swift took the stand first thing Thursday on Day 4 of her trial involving accusations that a former Denver radio DJ groped her at a 2013 photo shoot, and confidently told the court that he had grabbed her “bare ass” in what she said was a “horrifying” and “shocking” experience.

VIEW: Courtroom sketches from each day of trial

Swift was called to the stand by former KYGO DJ David Mueller’s attorney, Gabriel McFarland, a day after her mother, Andrea, and her “radio guy,” Frank Bell, were questioned and cross-examined.

“What Mr. Mueller did was, like I said, very intentional, and the location was very intentional,” Swift said Thursday morning in a U.S. District Court of Colorado courtroom. “None of us expected this to happen. It had never happened before.”

McFarland asked Swift if she was critical of her bodyguard, Greg Dent, in that he didn’t stop Mueller when the alleged grope happened. Swift alleged Thursday both Mueller and his girlfriend, Shannon Melcher, had been drinking before they arrived to the meet-and-greet photo shoot on June 2, 2013.

“No, I am critical of your client for sticking his hand under my skirt and grabbing my bare ass,” Swift quipped back at McFarland’s questions.

She said she recalled Mueller boasting about being on the radio and working at KYGO, and said that she felt he thought he deserved special treatment.

“It was filled with expectation,” Swift said of his statements.

She also pushed back tersely against McFarland’s questioning regarding Mueller’s recounting of the incident, which he spent Tuesday and Wednesday talking about. He’d mentioned the “jostling” and “diving in” toward Swift to take the photo together, but Swift said that wasn’t the case.

“We got into a photo formation. It’s really easy; you just stand there,” Swift said.

“I’ve experienced every degree of an awkward first encounter,” she continued, saying that usually, she and the other person apologize to one another and laugh. She said sternly that didn’t happen.

“This was not jostling. There was no diving into picture. We were perfectly in place to have the picture taken. This was not an action shot.”

McFarland asked about Swift’s reaction when she found out Mueller lost his job at KYGO.

“I didn’t have a reaction to a strange person I didn’t know losing his job…that was a product of his decisions, not mine,” Swift says. “I’m not going to let you or your client make me feel like this is my fault.”

McFarland then asked her if she was sure it was Mueller who grabbed her.

“It happened to me. He had a handful of my ass. It happened to me. I know it was him,” Swift said of Mueller. “I didn’t need a picture. I could have picked him out of a line of a thousand…this is not alleged. I don’t need you to grill me about the tiny details of this photograph.”

McFarland pressed on with further questioning about if she was sure.

“You can ask me a million questions about it and I’m never going to say something different,” Swift says. “I never have said anything different.”

After more pressing of Swift, McFarland ended his questioning of the defiant pop star. The judge asked Swift’s attorney, J. Doug Baldridge, if he wanted to cross-examine her.

“Absolutely no questions, your honor,” he said.

A less-explosive rest of Day 4

Swift’s testimony was certainly the most explosive of the day. Afterward, called to the stand were Bob Call (the KYGO general manager), Eddie Haskell (Mueller’s program director at KYGO), a staffer who was the room manager of Swift’s meet-and-greets, and Stephanie Simbeck, who runs Swift’s meet-and-greets and was the photographer who took the notorious photo of Swift and Mueller.

Call detailed how he learned about the alleged groping by Mueller from Frank Bell and Eddie Haskell, who had both contacted him.

But he was adamant that the subsequent investigation into Mueller’s alleged conduct was a KYGO-driven investigation, and that though Bell had suggested Call “do the right thing” in the case, he never felt pressured to fire Mueller by Swift’s team.

Both he and Haskell, who took the stand after Call, were part of the seven-person team investigating Mueller’s conduct and deciding whether he needed to be punished.

“I looked at facts that were available to me. And that was, I had this picture. I had what I felt was very solid, credible information from Mr. Bell. I had a situation where his story changed from, ‘It didn’t happen, it didn’t happen,’ to then, ‘it was incidental,’” Call said. “And there was the picture…with his hand in a place where people don’t put their hands during a meet-and-greet picture.”

“It made no sense to me that Taylor would make such a claim,” he added.

They both said on the stand Thursday that Mueller was fired for violating the morality clause of his employment agreement. They both agreed that Mueller had also changed his story during his meeting with them on the day after the alleged incident.

“He, in our opinion, violated…our contract and created an embarrassing situation for our company, our clients…by virtue of touching Taylor’s rear end,” Call said, noting that he realized the alleged touching could have happened “incidentally or accidentally.”

Haskell said there had been some issues with Mueller pushing back against the hiring of a woman to cohost the morning show he and his friend, Ryan Kliesch, were hosting.

Both men said that they believed Mueller was justly fired simply for the morality clause violation and for seemingly changing his story.

Haskell also pushed back at Mueller’s allegations that it was actually him who had grabbed Swift’s rear end.

“It is an absolute lie. And the fact that it took him 2 years to make that story up shows it is a lie,” Haskell said.

“It was never mentioned in our 2-hour meeting with him,” Haskell added. “It wasn’t mentioned the night of…The first time I was made aware of it was in a federal lawsuit that then went to the entire media world.”

Haskell said he believes Mueller’s statements have had a public impact on him. He said he was up for a couple of jobs he didn’t get, that one person even brought it up directly.

He added that even last week, another friend told him that people at that friend’s company had been talking about the allegation Mueller made against Haskell.

“I assaulted her in a room of 20 people, then her mother happily took me on a tour,” Haskell said sarcastically.

And in an impromptu interview during a court break that followed his testimony, Haskell clarified allegations Mueller had made earlier this week that Haskell had said something about bike shorts after his meet-and-greet with Swift.

Haskell said he indeed mentioned Swift’s bike shorts, but said he made those comments only after taking the stage tour and learning how Swift would change wardrobes on a platform below the stage in about 15 seconds, saying she wears bike shorts underneath so she can change quickly.

In that same interview, Haskell said he was glad he finally got a chance to clear his name after Mueller made his allegations against Haskell public when filing this lawsuit more than 2 years ago.

Following the break, a room staffer in the photo room testified, and then Stephanie Simbeck, who was the photographer in the meet-and-greet room, was brought to the stand.

Simbeck says she did not see Mueller put his hand under her skirt or lift it, but said she saw him touch her inappropriately.

“She had an uncomfortable shocked looked on her face, and I saw his hand grab her ass,” Simbeck said.

“Did you have to look at the picture to know he did that?” one of Swift’s attorneys asked Simbeck on cross-examination.

“No because I saw it happen,” she replied.

She said Swift didn’t have a chance to say anything after the Mueller photo because other fans were already in the room. But Simbeck says after the meet-and-greet is when she told the room about Mueller allegedly grabbing her.

“I knew it. I have the photograph,” Simbeck says she told Swift. Swift said, “That’s him,” according to Simbeck, who said Swift expressed “no doubt” that Mueller was the man she was accusing and was also the man in the photo Simbeck brought up.

Simbeck added that it was “ridiculous” to think that Mueller’s testimony that he jumped into the picture last minute is true.

Simbeck’s testimony wrapped court for the day. The case will be back in session at 8:45 a.m.

But Judge Martinez gave a hint that the case might be nearing the final stages. He said he’d issued an order, which will be sealed until a verdict is delivered, that came out of the private conference the attorneys had to start the day Wednesday.

He then said he and attorneys would start discussing a timeline and rules for closing arguments, and said he’d have an update on that Friday afternoon.

Go back through Day 4 of the trial on our live blog. Click here to view courtroom sketches of the trial issued so far.