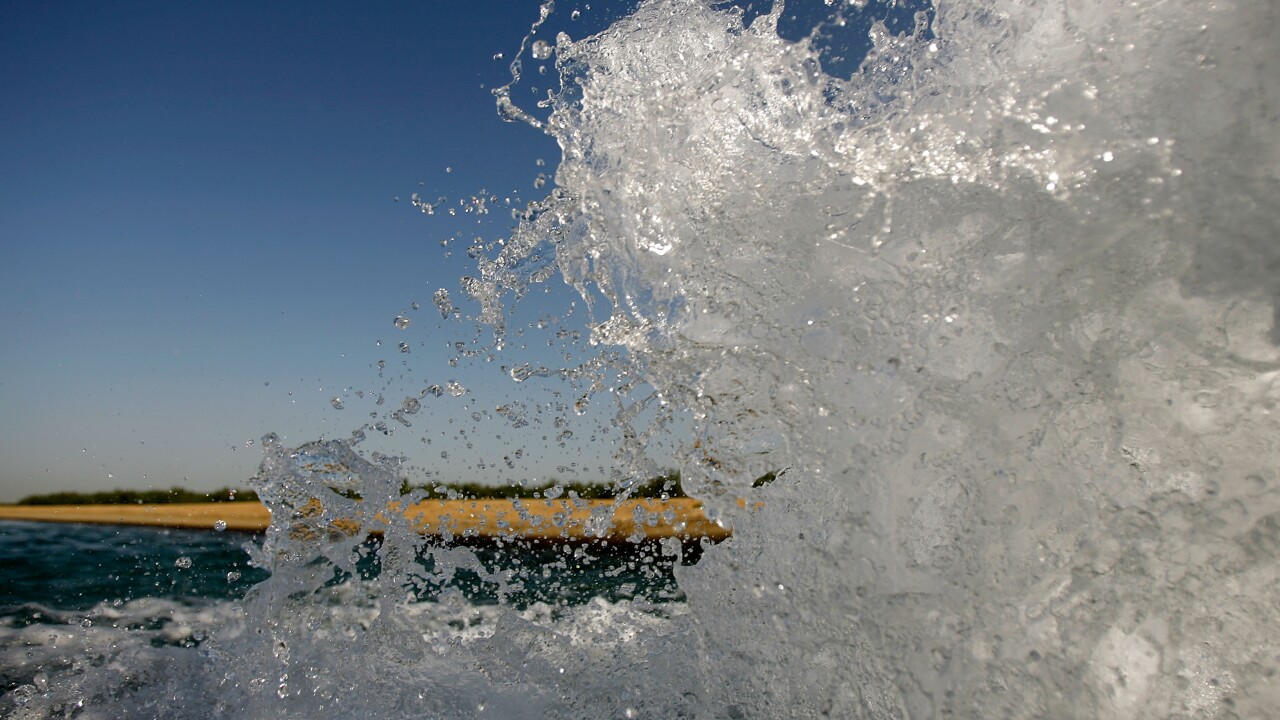 David McNew/Getty Images
BAKERSFIELD, CA - MAY 08: Water from an emergency reserve, for use during drought conditions, sprays from a well pipe and into a canal for farmers to use on May 8, 2008 near Bakersfield, California. Opening of the Kern County reserve wells began earlier this week. Urgent calls for California residents to conserve water have grown in the wake of the final Sierra Nevada Mountains snow survey of the season indicating a snow depth and water content at only 67 percent of normal levels. The Sierra snowpack is vital to California water supplies and officials are preparing plans for mandatory water conservation. In Southern California, the Metropolitan Water District, cut deliveries to farmers by nearly a third and growers in Fresno and Kings counties have not planted about 200,000 acres of crops, a third of the land irrigated by Westlands Water District. Many farmers are now selling their government-subsidized water for profit instead of using it to plant crops. Much of the California water supply comes from the Colorado River where a continuing eight-year drought has lowered water storage to roughly half of capacity. Dry conditions across the West have already doubled the wildfires this year causing fire officials to brace for a possible repeat of the devastating 2007 southern California wildfire season. (Photo by David McNew/Getty Images)

DENVER – Colorado's snowpack keeps climbing through the first week of June, with the statewide snowpack at 625% of normal as of this week. That's up from 437% of normal across the state last week.

We know all that snow has been good for drought conditions (there are none in Colorado, currently). But we're still waiting to see how it could affect flood conditions, as snowmelt kicks into high gear over the next few weeks.

Major floods in Colorado generally happen as a result of rainfall, not snowmelt, but state officials were still warning of localized and isolated flooding , which was already happening in some areas of the state last week, according to the Colorado Water Conservation Board.

At the moment, an area to keep an eye on is southwest Colorado, where the snowpack levels were extremely high this week in three river basins: 2,014% of normal in the Gunnison; 1,277% in the San Miguel, Dolores, Animas and San Juan; and 697% through the Upper Rio Grande.

Parts of the Rio Grande National Forest were under a flood warning and a flood watch this weekend. And while the outlook from the National Weather Service on Friday wasn't calling for more than some minor flooding in low-lying areas, accelerated snowmelt was expected to increase river flows and create swift currents.

Below are where rivers have approached minor flood stages, according to the Weather Service's latest observations . That means they're currently at levels deemed to be the "action stage."

The short of it: Only one river – the Rio Grande near Del Norte (see below) – is forecast to hit a flood stage over the next week, and it's expected to be just into the minor flood stage zone.

The National Weather Service forecasts minor flooding in this area, with waters hovering around the 5.5-foot mark over the next several days.

No flood stage level is listed for this area of the Navajo River, but the Weather Service forecasts water levels to drop below four feet over the next few days.

Water levels here should stay about where they are now, according to the forecasts.

Another one without a flood stage level listed, but the forecast says waters here should stay about where they are.

Water levels could get close to 12 feet, according to the forecast, but they should drop slightly over the week, not approaching flood levels.

Waters here aren't too close to a flood stage and should dip over the next few days, according to the forecast.

Waters here are forecast to dip over the next few days before rising to around its current levels later in the week. But no flooding expected.